Could We Be Wrong About Where “The Big One” Will Strike? Earthquakes Are Occurring in Areas We NEVER Expected 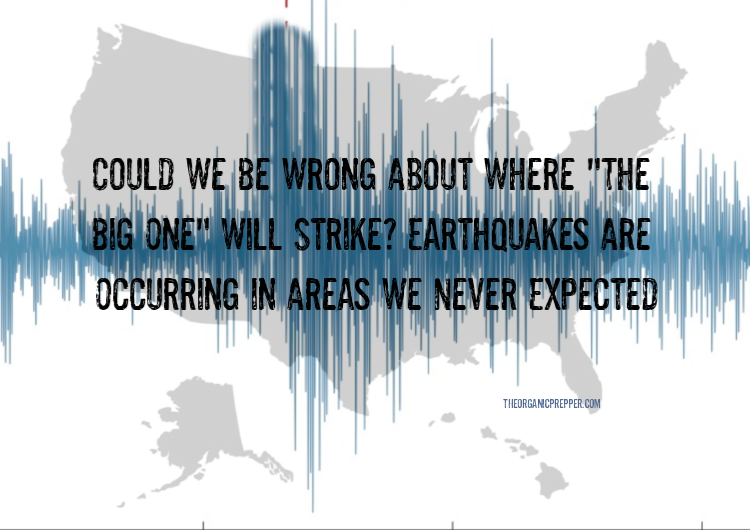 Last week, a county in central Kansas experienced something quite unusual for the region: within a five day period, there were eleven earthquakes. Kansas is not a particularly earthquake-prone state, taking spot #41 on the U.S. Earthquake Index. This means that the chance of earthquake damage in Kansas is much lower than the national average.

This shocking increase in seismic activity began with a magnitude-2.4 earthquake last Wednesday morning. The quake occurred around 2 1/2 miles southwest of Hutchinson, Kansas, in Reno County, according to the United States Geological Survey (USGS). It was followed by ten more earthquakes, reports The Kansas City Star:

The second came just before 8 a.m. on Friday. The magnitude-4.2 shook the area, centered less than a mile southwest of Wednesday’s temblor. More than 1,000 people reported feeling the quake across Kansas, Oklahoma, and Missouri, according to the USGS.

It wouldn’t be the last quake on Friday. A magnitude-3.1 quake shook the ariea about 10 minutes later followed by four more tremors through the day ranging from magnitude 2.4 to 3.0, according to the USGS.

Seismic activity in the area continued on Saturday with three more quakes — magnitudes 2.0 to 3.0 — before a magnitude 4.1 shook the area early Sunday morning, according to the USGS. (source)

Rick Miller, director of the Kansas Geological Survey in Lawrence, told The Hutchinson News that while the region does have a history of small quakes, last week’s activity was unusual:

“There’ve been about a dozen micro-level events, from 1.7 to 2.2, in Reno County in the prior six months,” Miller said. “They had slowed dramatically from what was earlier.”

“This (the 4.2) was not unexpected in terms of magnitude,” Miller said. “It was not unreasonable based on the recursion situation, the number of 2′s and 3′s you’ve had.”

“It’s hard to believe there will be anything bigger than a 4.2,” Miller said “You don’t have a long enough (fault) structure for that. It’s not outside the realm of possibility for something a little larger, but that’s as close to the top end you’ll see, based on the size of the structure where it occurred.”

The previous quakes that have occurred in the region have revealed the extent of the shallow faults, Miller said.

While Reno County has been quiet this summer, there has been a jump in events in other places around the state, including the third largest quake scientists are aware of in the state in Rooks County in June.

“It didn’t get much attention,” he noted. “The area has had them before, back in the 80s … This area has been active for about 30 years. But this is larger than out of the ordinary for what we’ve seen across Kansas. They’ve just never been this big and focused in this area.” (source)

In some parts of the US, the number of earthquakes has increased dramatically.

According to a report from USGS, within the central and eastern United States, the number of earthquakes has increased dramatically over the past few years.

The number of earthquakes in the central U.S. has increased dramatically over the past decade. Between the years 1973–2008, there was an average of 25 earthquakes of magnitude three and larger in the central and eastern United States. Since 2009, the average number of M3 earthquakes has jumped to 362 per year. The rate peaked in 2015 with 1010 M3+ earthquakes.

Since 2015 the earthquake rate has declined, with 690 and 364 M3+ earthquakes in 2016 and 2017, respectively. Nonetheless, this rate is far higher than the average of 25 earthquakes per year. Most of these earthquakes are in the magnitude 3–4 range—large enough to have been felt by many people—yet small enough to rarely cause damage. Damage has been caused by some of the larger events, including the M5.8 Pawnee and M5.0 Cushing Oklahoma earthquakes that occurred in 2016. (source)

Induced earthquakes – those that are caused by man – may be one cause of this increased frequency. Disposal of waste fluids that are a byproduct of oil production is the primary cause of the recent increase in earthquakes in the central United States. Fracking may cause some as well. To read more about induced earthquakes, please see this report: Induced Earthquakes

Earthquakes are not increasing in frequency overall, however.

While this activity is outside of the norm for Kansas, earthquakes overall are not increasing in frequency, according to USGS:

The National Earthquake Information Center now locates about 20,000 earthquakes each year, or approximately 55 per day. As a result of the improvements in communications and the increased interest in natural disasters, the public now learns about earthquakes more quickly than ever before.

The year with the largest total was 2010, with 24 earthquakes greater than or equal to magnitude 7.0. In other years the total was well below the 16 per year expected based on the long-term average:  1989 only saw 6, while 1988 saw only 7 major earthquakes. (source)

Small earthquakes happen quite often in the US. Take a look at this live map to see the most recent (a few occurred as I was writing this article!) Earthquake Map

The vast majority of earthquakes we feel come soon after smaller ones, according to new research that provides unprecedented insights into how seismology works.

Previously, scientists believed that only half of all moderate quakes had smaller precursor events. But after studying Southern California quakes of at least magnitude 4 between 2008 and 2017, scientists found that at least 72% of them followed less-powerful earthquakes.

Days (or even weeks) before quakes of 4.0 or higher magnitude occur, smaller ones ripple beneath the Earth’s surface. This activity can be detected by an advanced computing technique. The smaller earthquakes that precede larger ones in the same location are called foreshocks. An earthquake cannot be identified as a foreshock until after a larger earthquake in the same area occurs.

“One of the biggest questions in earthquake seismology is how earthquakes get started,” said the study’s lead author, Daniel Trugman, a seismologist at Los Alamos National Laboratory.

The breakthrough in the study, published earlier this summer in the journal Geophysical Research Letters, was made possible by the discovery of a new technique to find very small earthquakes – quakes as small as magnitudes 0 and 1, and some as small as magnitude negative 2.

Quakes can now have negative magnitudes because this new technique allows for observation of quakes so small they were previously thought to be undetectable.

It is important to understand that larger quakes do not always follow smaller ones.

While quakes cannot be predicted, earthquake forecasts can be made, providing the probability that an earthquake of a given size or larger will occur in an area (like Northern California) over a certain timeframe. A forecast only provides information on the likelihood of an event occurring in a (large) timeframe, not a certainty as to whether or not it will occur.

Scientists can calculate the probability that a significant earthquake will occur in a specific area within a certain number of years (usually several decades or more), but currently, it is nearly impossible to predict when a quake is imminent.

Predictions (by non-scientists) usually start swirling around social media when something happens that is thought to be a precursor to an earthquake in the near future. The so-called precursor is often a swarm of small earthquakes, increasing amounts of radon in local water, unusual behavior of animals, increasing size of magnitudes in moderate size events, or a moderate-magnitude event rare enough to suggest that it may be a foreshock.

Unfortunately, most such precursors frequently occur without being followed by an earthquake, so a real prediction is not possible. Instead, if there is a scientific basis, a forecast may be made in probabilistic terms. (source)

Statistically speaking, only 5% of earthquakes are followed by larger ones. The new study’s findings do not mean researchers are any closer to predicting the exact timing and epicenters of big earthquakes.

Because we can’t predict earthquakes, it is best to be prepared for them.

Even if you live in a region that isn’t commonly shaken by earthquakes, planning for them is a good idea. This is because there currently is no earthquake prediction system. Quakes can occur anywhere – at any time – so if you have not prepared for one, now is the time to get started.

If you live in a seismic zone, you probably already have plans in place (if not, it is time to do that!).

To learn what to do before the shaking begins, please see How to Prepare Your Home for an Earthquake

Go here to learn how to survive an earthquake and check out Daisy’s book, Be Ready for Anything to get prepared for a lengthy aftermath.

Have you ever experienced an earthquake? Are you prepared for earthquakes? Please share your thoughts in the comments. 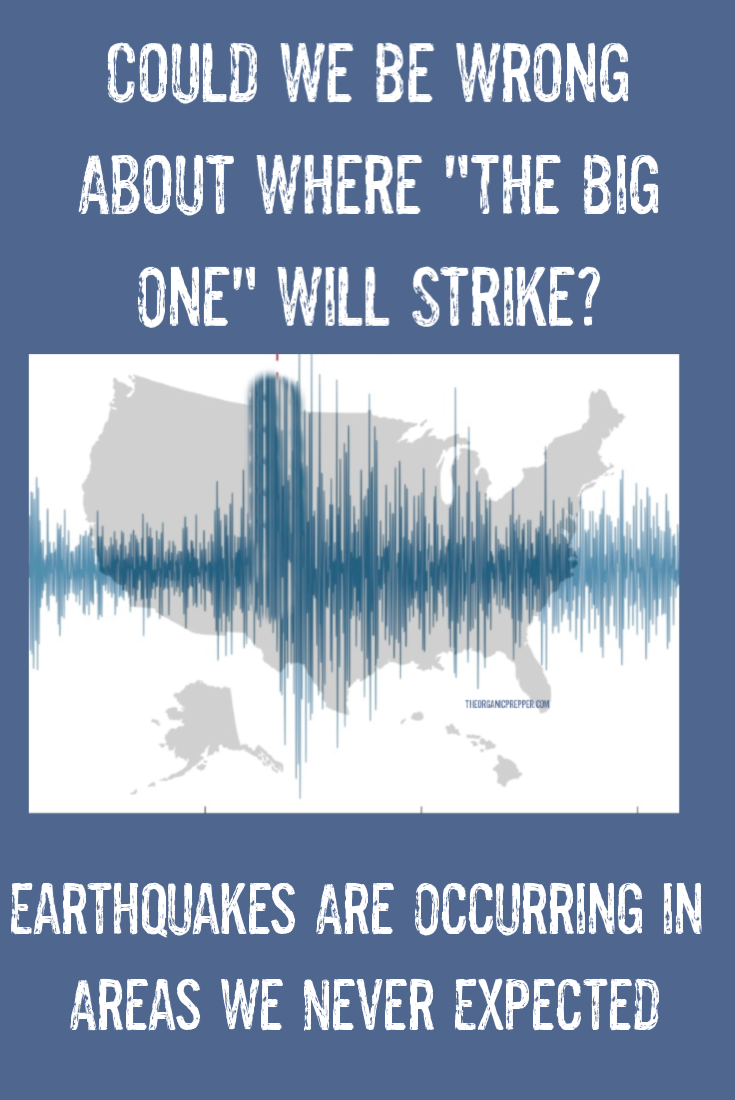