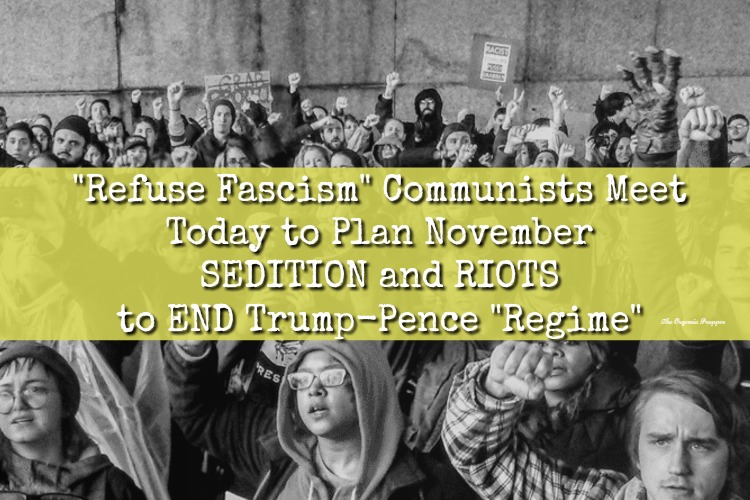 Sometimes, you don’t need a crystal ball to see the future. Sometimes, the future says, “Hey, I’m planning for all hell to break loose on this date.” And then you know. The future is telling us right now that on November 4th, there will be sedition and riots across the country to end the Trump-Pence “regime.”

Today, groups of people with communist leanings who intend to overthrow the United States government will be meeting in New York, Chicago, Los Angeles, San Francisco, and Austin for “regional conferences,” which makes it sound like they’re a bunch of dentists of something.

But they’re not. The group, called Refuse Fascism, plans to use any means necessary to end the Trump-Pence “regime.” They flatly refuse to try and find middle ground, criticizing both Barack Obama and Bernie Sanders for doing so:

After the election, Obama said of Trump: “We are now all rooting for his success.” NO! If Trump succeeds, humanity loses. Bernie Sanders has said that he will work with Trump on jobs or where they agree.  NO! If you work with fascists you normalize the road to horror. (source)

I’m not sure how the irony of a bunch of communists “refusing fascism” escapes them, but somehow it does. There are branches of Refuse Fascism in numerous locations across the nation.

Refuse Fascism is a project of the Alliance for Global Justice. This is noted on their website where they ask for donations. (Obviously, I’m not recommending you donate. I’m just quoting this to show you where their bread gets buttered.)

To support our educational activities and make a tax-deductible donation by mail, make your check out to Alliance for Global Justice” (our fiscal sponsor; you can use the abbreviation AFGJ), designate Refuse Fascism in the memo and mail to the address above. RefuseFascism.org is a fiscally sponsored project of the Alliance for Global Justice, a registered 501(c)3. (source)

According to The Daily Caller:

…the benefactors of the Alliance for Global Justice — and Refuse Fascism — are listed online.

According to its most recent 990 tax form, Alliance for Global Justice (AfGJ) received $2.2 million in funding for the fiscal year ending in March 2016.

One of the group’s biggest donors is the Tides Foundation, a non-profit funded by billionaire progressive philanthropist George Soros. Tides gave AfGJ $50,000.

The United Steel Workers labor union also contributed $5,000. The city of Tucson is also listed in AfGJ’s 990 as a donor, but a city official says that the city acted merely as a pass-through for a Native American tribe that provided a grant to the activist group. The city official said that no city money went to AfGJ. (source)

Raise your hand if you’re surprised to see George Soros linked to this. Hello?  Anyone?

For further reference, here’s a link to a PDF of their tax form with a list of all their donors.  Interesting reading.

Their plan is unrelenting chaos in the streets.

Today’s meeting is meant to organize the most massive protest across the country that has ever been seen in our history, forgetting that every action has an equal and opposite reaction. Their plan is to see anywhere from thousands to millions of people protesting in the streets on November 4th.

“Over the summer and into the Fall we must ACT, AGITATE and ORGANIZE and build the capacity and the momentum “working with all our creativity and determination toward the time when millions of people can be moved to fill the streets of cities and towns day after day and night after night, declaring this whole regime illegitimate – Demanding, and Not Stopping, Until the Trump/Pence Regime Is Driven from Power.” (source)

Of course, the thing they seem to be missing is that Trump and Pence are in office due to an election in which they won the vote across most of the country. The folks who are mad are the ones in large, liberal cities like the ones listed above. Just as a quick refresher: Red is Trump, Blue is Clinton. This, of course, means that the “Regime” is not actually “illegitimate” based on our Constitution.

But, the opinions of the American heartland and the South don’t matter to the ironically named Stop Fascism group. Months after Trump has been sworn into office, they still intend to overthrow the results of the election.

This, by definition, is sedition.

So, now that we’re clear on this, they have plans to commit sedition in November and today’s meeting is about organizing those crimes to end what they call the Trump-Pence “regime.”

Take To The Streets And Public Squares

in cities and towns across the country continuing day after day and night after night—not stopping—until our DEMAND is met:

This Nightmare Must End:

The Trump/Pence Regime Must Go!

In the Name of Humanity,
We REFUSE to Accept a Fascist America!

This is not going to be good. If this group succeeds in getting the numbers out there that they’re talking about, it will effectively shut down commerce in protest locations. Military, national guard, and police will step in. Counter-protests should be expected, and it will only be a matter of time until true violence like we haven’t seen in centuries, erupts in our city streets.

Martial law in this situation will be a given.

They seem to want to replace this perceived “fascism” with communism.

And this is about more than simply a hatred for Trump and Pence. It’s about a hatred for a whole LOT of different people. It’s about replacing a constitutional republic with something else, and based on a speech by Andy Zee, a co-initiator of Refuse Fascism, it looks like that replacement may be communism. In his speech, he cited a Communist author and quoted the Revolutionary Communist Party.

The Democrats, along with the New York Times and the Washington Post, etc., are seeking to resolve the crisis with the Trump presidency on the terms of this system, and in the interests of the ruling class of this system, which they represent. We, the masses of people, must go all out, and mobilize ourselves in the millions, to resolve this in our interests, in the interests of humanity, which are fundamentally different from and opposed to those of the ruling class. (source)

So yeah, he actually talks about Communism like it’s a good thing. By definition:

Communism is a political theory derived from Karl Marx, advocating class war and leading to a society in which all property is publicly owned and each person works and is paid according to their abilities and needs. (source)

1. a theory or system of social organization based on the holding of all property in common, actual ownership being ascribed to the community as a whole or to the state.

(often initial capital letter) a system of social organization in which all economic and social activity is controlled by a totalitarian state dominated by a single and self-perpetuating political party. (source)

While I have no love for big government, being screwed over by wealthy bankers, or being taxed to death, I refuse to watch America become a Communist country. If you think we have a lot to complain about now, can you imagine what a communist society would bring?

No private property. No freedom to get ahead. No more American dream. No motivation to create wonderful things or share ideas.

But, with their fiery rhetoric, they’ll lure in the ignorant who have absolutely no idea what they’re actually advocating for.

My friend, A. American, (the author of my bar-none FAVORITE prepper fiction series) is the person who brought this to my attention. His Facebook post is definitely worth reading. (And if you’re on social media, you can follow the page here.)

Remember, remember!
The fifth of November,
The Gunpowder treason and plot;
I know of no reason
Why the Gunpowder treason
Should ever be forgot!
Guy Fawkes and his companions
Did the scheme contrive,
To blow the King and Parliament
All up alive.

Last night in my post I said there would soon have to be an event along the lines of Charlottesville where the shooting will start. Today I come across this: http://investmentwatchblog.com/antifa-communists-meet-tomo…/

I find the date rather telling, as it relates to the poem above…

I know I’ve used Ukraine many times as an example of what’s coming. But it’s for good reason. The Maidan protests were orchestrated by the Obama administration and the Clinton State Department. The very same folks behind the current violent movement here.

So I will go out on a limb here and make a prediction. Should this event begin and should they get the thousands they are expecting in the streets, expect the shooting to start. And just like in Maidan they will probably shoot a few of their own, then blame it on the Right just kick off the show.

I know this sounds crazy and it would be, if it hadn’t already happened in several other countries. They have perfected this playbook through several evolutions and now it’s time for the home game. (source)

Will things truly get ugly?

I hope not. But you’d damn sure better be ready because if it does, people are going to die. There will be a government crack-down the likes of which most of us alive have never seen in response to this. You will want to be prepared with food, water, and most vitally, a serious defense plan.

I may not be personally thrilled with everything the Trump-Pence “regime” has to offer, but it’s a far sight better than this vision of Communist Amerika.