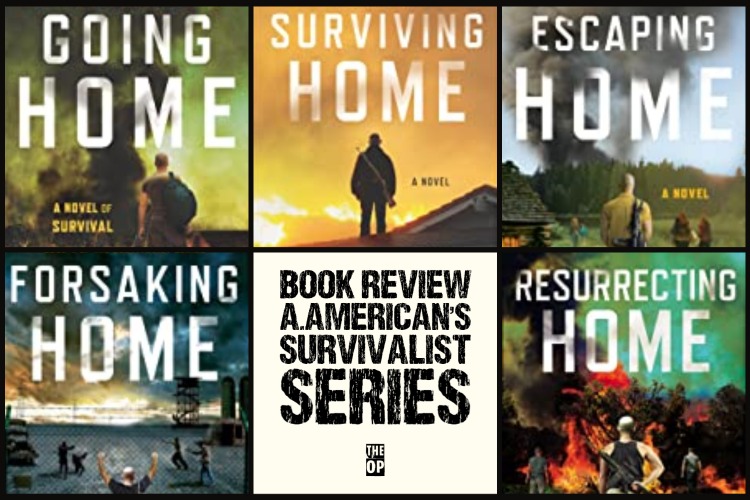 Looking for a good series to read? I’m here to hook you up!

I really love a good prepping/survival story and sometimes a good one can be tough to come by. There are those excellent classic survival books like One Second After and Alas Babylon that pretty much spoil you for lesser prepper fiction.

Now, I can give an absolutely resounding recommendation. You’ve got to read The Survivalist Series by A. American

This is a series that makes you wish Amazon had a rating higher than 5 stars.

I am a total bookworm, so I’ll read pretty much anything I can get my hands on and find some enjoyment. But my recommendation for these books is unqualified – I absolutely loved everything about them. Not only did I enjoy the books from an entertainment level, but the English major in me was delighted with the narrative style, character development, and smooth plot.

I picked up the first book to read on a plane during a recent trip to attend a wedding. I was very thankful to have a quiet seatmate who had his own book because from the moment I started the book, “Going Home” I couldn’t put it down. I read through flight #1, the layover, and the connecting Flight #2. And then, I was bummed because I hadn’t purchased the second book to read on the way home. While I was away, I ordered the next 3 books so they’d be waiting for me upon my return. I’m still waiting for #5 to arrive. And by waiting, I mean I’m getting kind of hostile because it didn’t magically appear the day after I ordered it.

I should have ordered the last one at the same time, because I didn’t do so until I finished #4, and I’m still waiting for #5 to arrive. And by waiting, I mean I’m getting kind of hostile because it didn’t magically appear the day after I ordered it.

Here’s what I loved about the books:

First things first, the author, Angery American, aka Chris Weatherman, is a prepper himself in real life and an all-around great guy. Check out this interview with him.

The characters are realistic and well-developed.  Some survival genre books have one-dimensional characters and flat dialog. Not so for this series. The main characters have quirks, personalities, and natural language. There’s a little bit of profanity, if that type of thing bothers you, but it isn’t used gratuitously for shock value. Some of the characters are crusty ex-military types who really don’t seem the type to say, “doggone it” when something blows up. I can wholeheartedly imagine that I’d let some 4 letter words slip in some of the circumstances the characters find themselves in, and the cursing seems very much in line with the characters and events. No one in the book is a perfect paragon of virtue – they’re all human beings who make human mistakes.

The scenarios described are the ones that preppers are getting ready for.  A wide variety of situations are described in the series, and nearly every prepper will be nodding in recognition of the events occurring. You’ve got scenarios like an EMP taking out the grid, an arduous get-home trip on foot, desperate people committing desperate acts to feed their families, the value of allies because there’s strength in numbers, the value of having supplies put back, disgruntled neighbors who didn’t prepare and believe that the protagonist is obligated to share his preps, martial law, FEMA camps that aren’t as wonderful as they are purported to be, power hungry guards who use the times as an excuse to abuse others, being forced to bug out when your plan was to bug in…the list goes on and on.

Conspiracy, beautiful conspiracy.  I love a good conspiracy theory and the series is loaded with them. They are presented in a realistic manner and not as some far-out tinfoil hat kind of thing.  I can’t say anything else without giving away major plot twists, but trust me, it’s awesome. It will make you think, “How far would I go to maintain my freedom?”

There are lots of little educational tidbits.  The characters have to do a lot of MacGuyvering since running to Wal-Mart is not an option. I learned several creative ideas for animal care, home fortification, and repairs on things that inevitably break down. As well, the main character, Morgan, had done a lot of reading before the collapse, so he was able to forage for food, knew some of the customs of local Native American tribes, and ways to manage the issues that send us today rushing to the store. You’re able to see how applicable learning to survive in your local environment really is, and why it’s vital to practice those skills before you need them. I added some things to my shopping list based on the experiences of the characters in the books.

The series is a good overview of human nature.  In these books, good people sometimes do bad things  As desperation grows, so too does the ability to overcome one’s personal filter of acceptable behavior.  Children misbehave and get themselves into trouble. People get depressed because of the dramatic changes. Evil people become free to do the things they probably always wanted to, but feared arrest when times were good. Bonds between friends become more like familial ties, and a tribal mentality re-emerges.

Here are the books, in order:

So far, this is a five part series. My fingers and toes are crossed that #6 is on its way.

When Morgan Carter’s car breaks down 250 miles from his home, he figures his weekend plans are ruined. But things are about to get much, much worse: the country’s power grid has collapsed. There is no electricity, no running water, no Internet, and no way to know when normalcy will be restored—if it ever will be. An avid survivalist, Morgan takes to the road with his prepper pack on his back.

During the grueling trek from Tallahassee to his home in Lake County, chaos threatens his every step but Morgan is hell-bent on getting home to his wife and daughters—and he’ll do whatever it takes to make that happen.

Now reunited with his loving wife and daughters in this follow-up to Going Home, Morgan knows that their happiness is fleeting, as the worst is yet to come. Though for years Morgan has been diligently preparing for emergency situations, many of his neighbors are completely unready for life in this strange new world—and they’re starting to get restless.

With the help of his closest companions, Morgan fights to keeps his home secure—only to discover shocking information about the state of the nation in the process.

After the collapse of the nation’s power grid, America is under martial law—and safety is an illusion. As violence erupts around him, Morgan Carter faces one of his most difficult decisions yet: whether to stay and defend his home, or move to a more isolated area, away from the prying eyes of the government. He and his family are hesitant to leave their beloved Lake County, but with increasingly suspicious activities happening in a nearby refugee camp, all signs point towards defecting. Morgan and his friends aren’t going to leave without a fight, though—and they’ll do anything to protect their freedoms

Morgan Carter has weathered the weeks after the collapse of the nation’s power grid, reuniting with his family and ensuring their safety, but his struggle isn’t over yet. Carter must focus on survival in an increasingly unstable society—but the challenges he faces are beyond his wildest imagination.

Meanwhile, the enclosed quarters of the nearby government-run refugee camp make for an environment where injury, assault and murder are the norm. As Jess creates trouble within the camp, Sarge and his crew plot to take down the entire establishment.

Against all odds, Morgan Carter and his family have endured despite the deteriorating conditions surrounding them. Armed with survivalist tactics, Morgan’s crew, alongside their new friends from the recently-liberated DHS camp, have worked together to build a sustainable community. But not all situations can be prepared for. When a massive wildfire threatens their very existence, they must decide: fight or flight?

I’m kind of guessing “A. American” is a pseudonym. His bio sounds quite a bit like his character, Morgan Carter, if Morgan picked up a pen and started writing:

A. American has been involved in prepping and survival communities since the early 1990s. An avid outdoorsman, he has a spent considerable time learning edible and medicinal plants and their uses as well as primitive survival skills. He currently resides in Florida with his wife of more than twenty years and his three daughters. 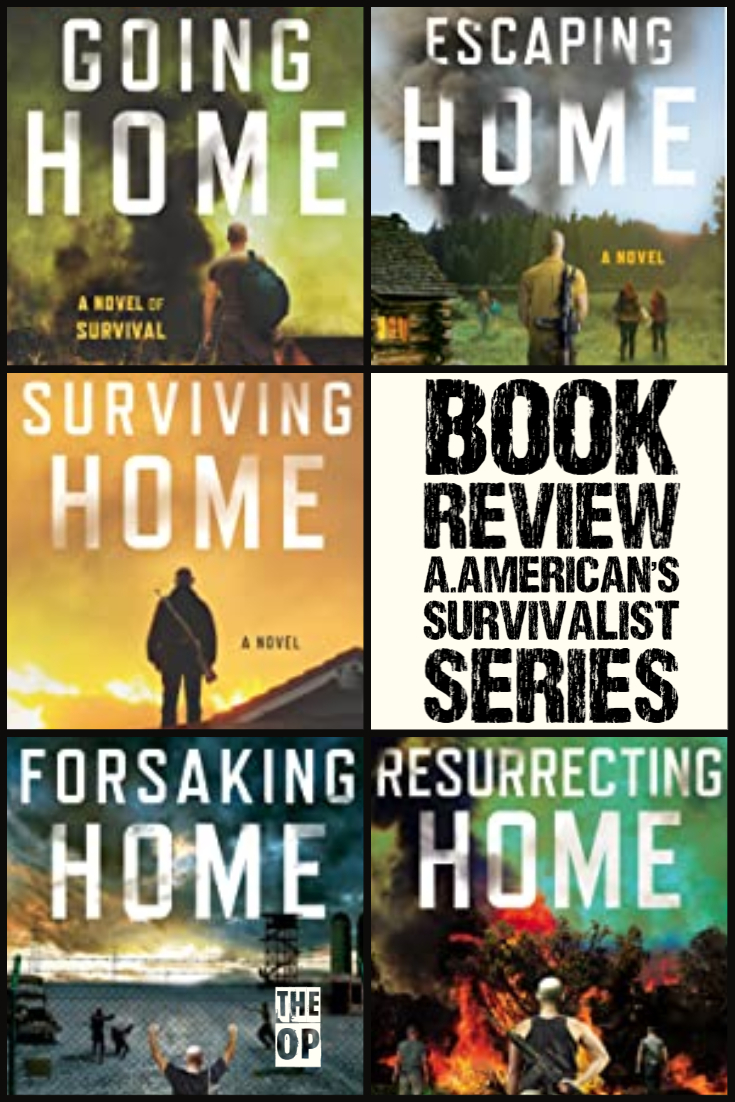