A Chinese Container Ship Trapped in the Chesapeake Bay? Sounds Normal to Me. 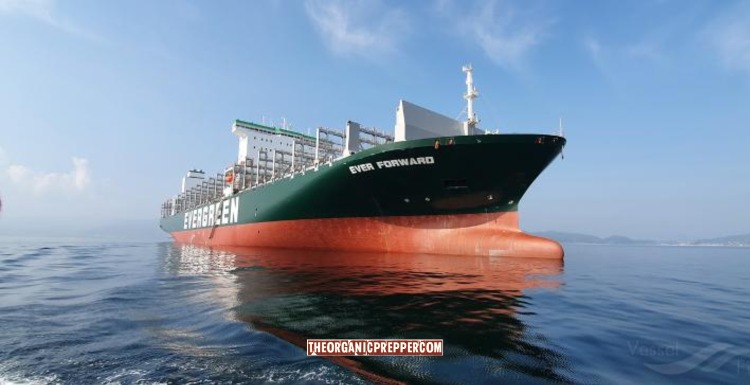 The container ship fiasco never really went away. It just quit being mentioned in the news cycle. But, perhaps, here’s one container ship story you weren’t even aware of. There’s a container ship that’s been stuck in the Chesapeake Bay for the past two weeks – and it’s flying the Hong Kong flag.

And, for what it’s worth, here’s a highly entertaining and completely unrelated video:

You can see this ship’s current coordinates HERE. (Approximately 37 miles from DC.)

What’s the backstory with this container ship?

The ship left Baltimore’s Seagirt Terminal on the night of March 13, 2022, with the stated intention of traveling to Norfolk, Virginia.

A perfect location for an accident

The location where the Ever Forward ended up grounding itself poses no obstruction to other cargo ships in the area and happened in such a way that there was no damage to the ship, no injuries were recorded, and no pollution took place. In short, its being grounded really creates no sense of urgency.

The US Coast Guard has stated that they’re not sure why the Ever Forward ran aground. (Surely, the Coast Guard isn’t insinuating they don’t know that big ships can’t travel in shallow waters. Are they referring to something else?)

Though Evergreen Marine is based out of Taiwan, the Ever Forward flies the Hong Kong flag. If you’re looking for a connection between the Chinese company Evergrande and Evergreen, so far, given a cursory glance through the respective companies’ boards of directors HERE and HERE, we can’t find one.

According to NukeMap, an atomic bomb the size of the one we dropped on Nagasaki if air-burst over DC wouldn’t cause any radioactive fallout to reach the Chesapeake Bay where the ship resides. That would be a rather large nuke for one of those missiles, but that is what I mean.

To the best of my knowledge, none of the missiles referenced within the above video are nuclear-capable. They were all cruise missiles chiefly designated for ships. That’s not to say they are the type of missiles that would be used in an attack of this type or that there aren’t EMP weapons that couldn’t be attached to the warheads of one of these missiles.

(Hey, you should probably read our free QUICKSTART Guide on what to eat when the power goes out.)

It’s probably worth pointing out the research of Dr. Vincent Pry at this point.

Pry has been one of the foremost voices of the EMP threat against the United States for years now. As he stated in 2020, China has been planning an EMP attack against Americans for 25 years now.

Norfolk is a major US Navy base (Naval Station Norfolk). Just saying.

Also, it wasn’t but two years ago, in March 2020, that China threatened to use EMP weaponry against the US Navy after arguments over the South China Sea.

Interestingly, this is an aspect of warfare that the United States seems to be neglecting and there are even some rather concerning hints we’re seeing here. As Americans, we have to quit living as if we’re immune to foreign aggression on American soil simply because we haven’t seen direct, overt, conventional military strikes since Pearl Harbor.

War is real, and America is not immune.

Is this Chinese container ship positioned to get American politicians to “play ball?”

Or is this container ship flying a Hong Kong flag that went out of the designated shipping channel and has been stuck (for reasons that the US Coast Guard can’t figure out) in the Chesapeake Bay 37 miles from DC and only a few miles from Baltimore for two weeks entirely a coincidence?

Let me know what you’re thinking below.