What Preppers Can Learn from Cape Town, Where Residents Live on 13 Gallons of Water Per Person Per Day 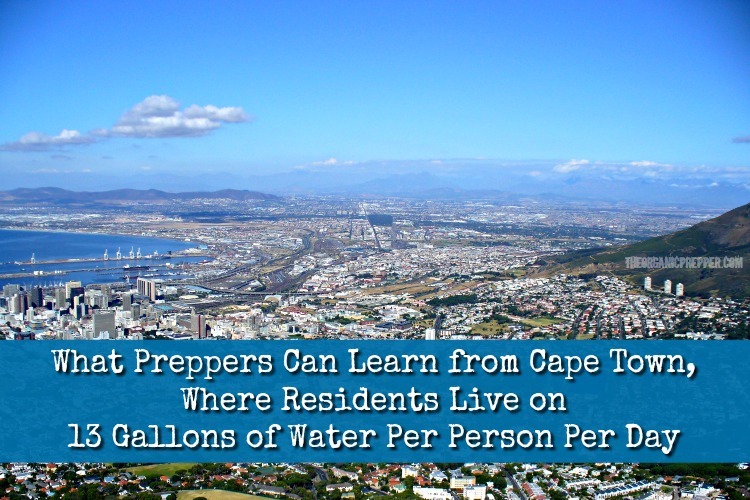 Living in Cape Town South Africa, after we have gained experience with rolling blackouts, our city (and surrounds) ran out of water … a first-world major metropolis ran out of water.

This is my summation of what happened and how we personally dealt with it.

How did Cape Town almost run completely out of water?

There were basically four main reasons, as Cape Town knew of this pending problem:

A “perfect storm” some would call it, triggered by a drought.

Here’s some more information if you wish to read further.

#DayZero – How close we came

The city of Cape Town, with plus or minus 4 million people, with businesses and the agricultural sector on top of that, was using about 1.2 billion litres of water per day. If the rains stayed, that would be no apparent problem, but it turns out that even with regular rains, the system was being put under severe strain already, and maintenance was behind too.

To make ends meet with the rains gone, first the agricultural sector’s water allocation was reduced, then canceled. Then large water users like businesses and hotels were forced to reduce. Then home users allowed only 50 liters (about 13 gallons) per person per day (pppd) i.e. level 6b water restrictions. Everyone was affected.

What are Level 6b restrictions? This included, not limited to, no watering of gardens, no topping up of pools, no washing of cars nor pavings i.e. no hosepipe usage at all, no filling of pools nor fish ponds or any water feature, and people were limited to only 13 gallons per day. With an average of four people per property that equates to a max usage of 6000 litres per month. (1585 gallons)

Note from Daisy: For comparison’s sake, the average American uses 101.5 gallons of water per day. For a family of four, that’s 406 gallons per day and 12,180 gallons per month.

Coupled with the above, a forced massive hike in the water price with huge fines if you don’t stay within the limit with the last resort, the physical limitation of the water supply to your home. Larger families could ask for an increased usage.

To further “help” people manage their water usage a website was created that showed each house in the city’s water consumption. Green dot and you are good, so one could also see ones neighbour’s usages. People got really angry and took to social media if they saw water wasters.

Some people, instead of shaming others, worked together to create solutions. A huge highlight was when a group of farmers who built their own private dam in Grabouw, then donated all their water for the city’s use. It helped a lot at a most critical point. Respect.

What actions were taken?

Politicians acting on the back foot to impress with expenditure, the blame game playing out in the press between local and national governments, a few small emergency desalination plants were built in haste (which challenged the constitution) with a number of large aquifers being tapped with a vengeance. The combined additional water, but a drop in the bucket, nowhere close to the minimum requirement of 450 million litres per day.

On top of this, the aquifers being pumped is a potential subsidence problem in due course if not correctly policed, not managed, policed, as more and more home and businesses also tapped into the same aquifers via private boreholes. Note: even with a borehole you were not allowed to water your garden or wash your car.

The prices of rainwater tanks shot up overnight, nearly doubling in price with waiting periods of weeks, sometimes months. Stores ran out of 25-liter containers. Everyone was investing heavily in containers for home storage and rainwater harvesting.

The #DayZero campaign was a huge success, it worked and people everywhere became aware of it, was even reported on internationally.

However, the countdown to #DayZero still continued. If the rains stayed away the dams will run dry on day zero.

If Day Zero occurs, people will be forced to queue for their allotted 50 liters (13 gallons) pppd at select water points around the city. Some townships and all informal settlements being unaffected, as they already have to walk for water.

However, the campaign had to be stopped. Cape Town, to a large extent, relies on tourism and the #DayZero campaign was affecting the industry negatively. We now get a newsletter where we are given links to all the websites to see the water levels and water usage of the city.

What this fiasco highlighted was that the Cape Town crisis was nothing new in South Africa, no, Cape Town was just the first prominent South African city to reach the national and international news.

It came to light that there are other areas in South Africa where they have been struggling for years without water, Department of Water and Sanitation turning a blind eye, so no-one took notice nor cared. There was no money left. All because of the misappropriation of State Funds, part of the State Capture.

But this is not only a South African problem. It is a worldwide problem. Water systems can be over taxed, dams can dry up in a serious drought, with the continued lavish use of water by most major cities.

To build new dams or desalination plants in the world’s current financial state is unaffordable. Aging infrastructure (pipes, pumps and water reservoirs) coupled with increased population migration towards cities, all are seriously taxing the most basic human right, clean water.

Everything depended on the rains returning. The rains did return, the problem was averted but it must be noted that the consumption was still left at 50 liters pppd. That is why the dam water levels where rising.

On the 1st of Oct 2018 the restrictions where slightly lifted to 70 liters pppd. Still no using municipal water for gardening, washing cars etc.

The fact stands, if the city goes back to excessive usage, or the rains stay away again, we will run out of water again. Home water management is here to stay as the bulk of the problem, to get more water sources, have still not been properly addressed at the time of this musing.

My vote. We need desalination plants for the city, ground water and dams are to be used for agricultural activities only. Problem is, there are no billions, not even millions, to spend on building anything – yet.

The big question: How did we survive on 50 litres (13 gallons) per person per day?

It is not easy, but once you have adapted, it becomes the new normal. It becomes as easy as eating a good pie.

You can do all of this with cool gadgets or automated pumps. You can spend a lot. This is the way to do it cheaply and efficiently.

Sit down one day and measure your actual water usage … you will be shocked.

The steps we took:

The water that you have caught in the bucket, the one you have been standing in, is used to flush the toilet.

You can buy a new model front loader that uses <50l per wash at a premium price. Families tend to have top loaders and they use about +-120-160l of water per wash. Note: Top loaders, for large loads, are more economical.

And that is how one gets by on 50 litres per person per day.

This is now our new lifestyle. It is easy, works efficiently and we have a family of 6 people using less than 5000 liters (1320 gallons) of water per month. 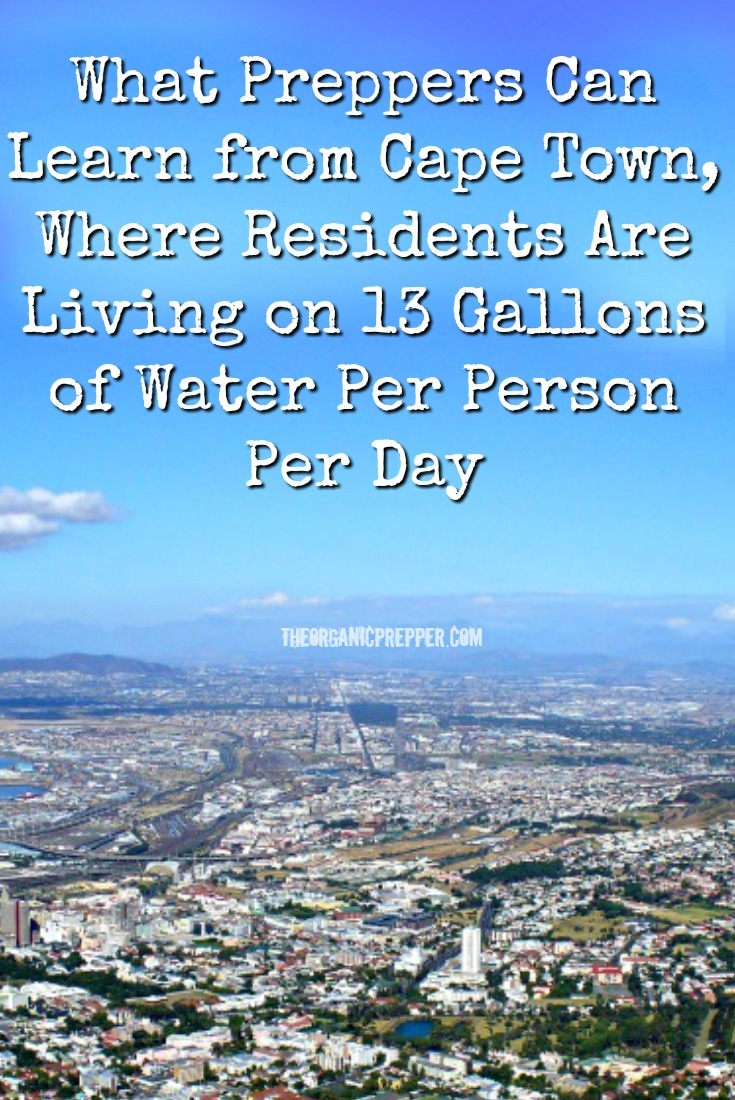