Bigger, Badder NDAA 2014 Quietly Passed the House and Senate – and It Is On the Way to Obama’s Desk 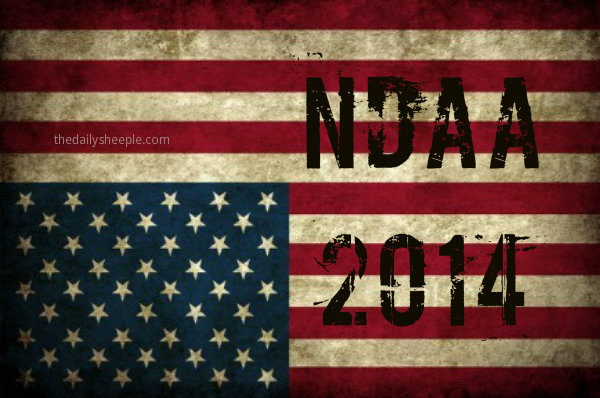 While everyone is distracted with the holiday festivities, Congress has been hard at work, screwing us over in the name of national security.

Yesterday the 2014 National Defense Authorization Act was fast-tracked through the Senate, with no time for discussion or amendments.  And you know, its Christmastime, so they just passed it so that they could recess for the holidays. The new version of the NDAA has already been quietly passed by the House of Representatives.

The indefinite detention allowed by the original NDAA is still here, and it’s actually worse now, because there are provisions that will make it easier for the government to target those who disagree.  Section 1071 outlines the creation of the “Conflict Records Research Center”, where the unconstitutionally obtained information that the NSA has collected is compiled and shared with the Department of Defense.  The information, called in the wording  “captured records,” can be anything from your phone records, emails, browsing history or posts on social media sites.

The New American reports in detail on the expansion of powers:

For two years, the NDAA included provisions that purported to authorize the president of the United States to deploy the U.S. military to apprehend and indefinitely detain any person (including an American citizen) who he believes “represent[s] an enduring security threat to the United States.”

Such an immense grant of power is not only unconscionable, but unconstitutional, as well.

Regardless of promises to the contrary made every year since 2011 by President Obama, the language of the NDAA places every citizen of the United States within the universe of potential “covered persons.” Any American could one day find himself or herself branded a “belligerent” and thus subject to the complete confiscation of his or her constitutional civil liberties and to nearly never-ending incarceration in a military prison.

Finally, there is in the NDAA for 2014 a frightening fusion of the federal government’s constant surveillance of innocent Americans and the assistance it will give to justifying the indefinite detention of anyone labeled an enemy of the regime.

Section 1071 of the version of the 2014 NDAA approved by the House and Senate committees this week expands on the scope of surveillance established by the Patriot Act and the Authorization for the Use of Military Force (AUMF).

Section 1071(a) authorizes the secretary of defense to “establish a center to be known as the ‘Conflict Records Research Center.’” According to the text of the latest version of the NDAA, the center’s task would be to compile a “digital research database including translations and to facilitate research and analysis of records captured from countries, organizations, and individuals, now or once hostile to the United States.”

In order to accomplish the center’s purpose, the secretary of defense will create an information exchange in cooperation with the director of national intelligence.

Key to the functioning of this information exchange will be the collection of “captured records.” Section 1071(g)(1), defines a captured record as “a document, audio file, video file, or other material captured during combat operations from countries, organizations, or individuals, now or once hostile to the United States.”

When read in conjunction with the provision of the AUMF that left the War on Terror open-ended and the prior NDAAs’ classification of the United States as a battleground in that unconstitutional war, and you’ve got a powerful combination that can knock out the entire Bill of Rights.

Finally, when all the foregoing is couched within the context of the revelations regarding the dragnet surveillance programs of the NSA, it becomes evident that anyone’s phone records, e-mail messages, browsing history, text messages, and social media posts could qualify as a “captured record.”

After being seized by the NSA (or some other federal surveillance apparatus), the materials would be processed by the Conflict Records Research Center created by this bill. This center’s massive database of electronic information and its collaboration with the NSA converts the United States into a constantly monitored holding cell and all its citizens and residents into suspects. All, of course, in the name of the security of the homeland. (source)

One thing that was omitted is the amendment on the prosecution of sexual assaults in the military.  So, we can all be locked up indefinitely for crimes that haven’t been proven, but they don’t care so much if military members continue to rape other military members.

The final compromise, fashioned by the leaders of the House and Senate Armed Services committees, leaves out Democratic language that would have eased restrictions on transferring Gitmo detainees to the United States — a provision that would have helped the administration achieve its goal of shuttering the facility.

It also does not include a controversial amendment by Sen. Kirsten Gillibrand to remove decisions about prosecuting sexual assault from the military chain of command. The New York Democrat says she’s secured a commitment from Reid to bring her proposal to the floor as a stand-alone measure next year. Although she may get her vote, the legislation is not expected to survive in the Republican-controlled House.

Thursday’s defense bill also sidesteps the debate over Iran. Senators who wanted to offer amendments imposing tougher sanctions were blocked because of the bill’s fast-track process, which supporters said was necessary to get it finished before the end of the year. So Iran sanction hawks’ efforts will have to wait until next year. Movement now toward stricter sanctions, the White House has warned, would undermine its ongoing negotiations to curb Iran’s nuclear program.

If you’re wondering who this year’s enemies of the Constitution are, here is the roll call from the Senate yesterday. 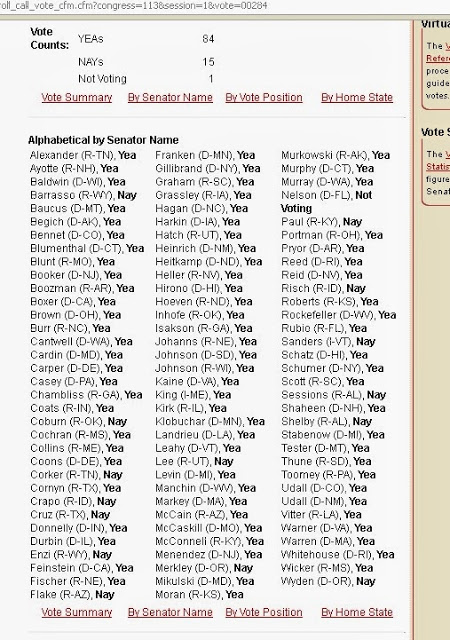 Unsurprisingly, there is little hope that President Obama will fail to sign this into law.

Under the new and “improved” NDAA, I’m a belligerent for writing this, and you’re a belligerent for reading this.  God help you if you email someone about it or share it on Facebook. We’re all going to be busted as belligerents under this one.

See you at Gitmo or the FEMA camps!

This article was originally published at The Daily Sheeple.