Avoid the Pharmacy: Fight the Flu with Remedies from the Kitchen

This year’s flu promises to be one of the  worst on record.  The CDC estimates that over 200,000 flu victims will be hospitalized.  The aggressive strain of H3N2v was not included in this year’s vaccine, so even if you got jabbed (and believe that the flu shot is effective) you’d still be at risk for this nasty virus. According to the CDC, H3N2v is mutation of the swine flu. 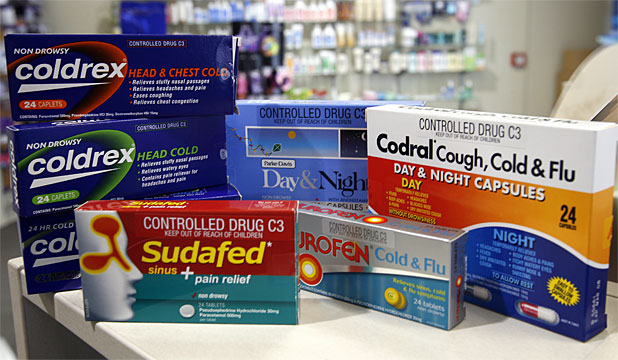 Many people are lining up in the germ-infested pharmacy to purchase over-the-counter and prescription flu remedies.  These medications may not be the best option –  in fact, many of them are downright harmful.

The newest darling of the pharmaceutical industry is Tamiflu.  Tamiflu is advertised as something to shorten the term and severity of the illness.  “Tamiflu is an FDA-approved prescription flu medicine that attacks the flu at its source. Tamiflu doesn’t just treat the symptoms of flu that make you feel bad. Tamiflu fights the flu virus itself.”  According to their website:

The most common side effects of Tamiflu are mild to moderate nausea and vomiting.

People with the flu, particularly children and adolescents, may be at increased risk for seizures, confusion, or abnormal behavior when they first get sick. These events may occur when the flu is not treated or right after starting Tamiflu. These events are uncommon but may lead to accidental injury. Contact a healthcare professional right away if you notice any unusual behavior.

This links to a PDF of prescribing information for doctors, which tells a slightly more alarming story:

WARNINGS AND PRECAUTIONS ———————–
 Serious skin/hypersensitivity reactions such as Stevens-Johnson
Syndrome, toxic epidermal necrolysis and erythema multiforme:
Discontinue TAMIFLU and initiate appropriate treatment if allergic-like
reactions occur or are suspected. (5.1)
 Neuropsychiatric events: Patients with influenza, including those receiving
TAMIFLU, particularly pediatric patients, may be at an increased risk of
confusion or abnormal behavior early in their illness. Monitor for signs of
abnormal behavior. (5.2)

Leading natural health website Mercola.com claims that the research on Tamiflu is flawed.  According to an article by Dr. Mercola, the limited benefits do not outweigh the risks, particularly for children:

Back in 2008, the FDA started reviewing reports of abnormal behavior and disturbing brain effects in more than 1,800 children who had taken Tamiflu. The symptoms included convulsions, delirium and delusions. In Japan, five deaths were reported in children under 16 as a result of such neurological or psychiatric problems. Seven adult deaths have also been attributed to Tamiflu, due to its neuropsychiatric effect.

According to a 2009 study, more than half of children taking Tamiflu experience side effects such as nausea and nightmares. Other more rare and bizarre side effects have also been reported, such as the case of a 19-year old British girl who developed toxic epidermal necrolysis and blindness after taking Tamiflu last year.

So, for an estimated 1.3 days less of sick-time, you run the risk of neuropsychiatric side effects, delusions, convulsions, nausea, vomiting and life-threatening skin allergies.  Plus, it costs $115-$200 for a course of the drug.

Since the symptoms of the flu are similar to those of a cold (runny nose, congestion, fever) many people are turning to over-the-counter cold remedies to treat those symptoms.  Sometimes the side effects can be worse than the symptoms you’re trying to treat.

Antihistamines are supposed to stop the watering eyes, runny noses and scratchy throats but result in severe drowsiness for most people.  Other common side effects are dizziness, headaches, dry mouth, dry eyes, and fatigue.

Decongestants (like pseudoephedrine or phenylephrine) allege to reduce sinus congestion, but can also dangerously increase heart rates and blood pressure in some people.  Other side effects are Restlessness, insomnia, tremors, and anxiety.

Phenylpropanolamine (PPA), another common ingredient in cold and flu medicines, can increase the risk of hemorrhagic stroke, especially in women ages 19-45.

For people who take  monoamine oxidase inhibitors or SSRI antidepressants, the above medication types can cause lethal interactions.

Dextromethorphan, the most common active ingredient in over-the-counter cough medicine, can be deadly if the recommended dosage is exceeded.  As well, it is one of the most abused OTCs for those seeking a quick “high”.  Common side effects of dextramethorphan are drowsiness, nausea, confusion, and dizziness.  Expectorants and suppressants can cause either constipation or diarhea.

Over the counter medicated nasal sprays work quickly to open the nasal passages, but if they are used for more than 3-5 days in a row, they can result in more congestion than you had in the first place due to the “rebound effect” or rhinitis medicamentosa.  When this occurs, the swelling of the nasal passages can become permanent, requiring surgical intervention.

The Solutions Are As Close as Your Kitchen

So, what’s a sniffling, coughing, congested flu-sufferer to do?  Forget heading to the petri dish that is your local pharmacy – go to the kitchen – there are lots of things you already have that help reduce the misery to a tolerable level without the risk of nasty side effects!

Note: I’m not a doctor, nor do I play one on TV.  These home remedies are for informational purposes only and are not a substitute for medical advice from a professional. Some natural remedies can interact with prescription medications and can exacerbate certain pre-existing conditions. “Natural” does not mean bereft of side effects and interactions. Always consult with a trusted practitioner before using home remedies.

Specifically, you want to stock up on raw honey, rather than pasteurized.  When honey is heated during the pasteurization  process many of its health benefits are either lost or diminished.  If you don’t have raw honey, use what you have, but when shopping, look specifically for unheated honey.

According to some studies, honey is antibacterial, antifungal, and antiviral, which makes it applicable before the source of the illness is known.

Instead of reaching for the cough syrup, some people try a teaspoon of honey sprinkled with cinnamon before bedtime to soothe a cough or sore, inflamed throats.

Not everyone can tolerate spicy food, particularly when they are sick. However if you can, there is no betteer way to clear your sinuses.  Why?

Capsaicin is the natural compound that is found in hot peppers – it’s what gives them their heat.  The capsaicin can help thin mucus, causing your nose to run, and thus clearing your nasal passages.  You can get a similar effect from freshly cut onions.

A spicy bowl of chili or a fiery Asian stir-fry could be just what the doctor ordered for sinus relief.

Green Tea is the perfect beverage for someone suffering from the flu. A cup of green tea that has been steeped for 3-5 minutes is loaded with immunity-boosting antioxidants.  This helps your cells to fight off the germs which are making you sick.

Any hot beverage will help warm up someone suffering from chills and you can sweeten it with honey (mentioned above) to make the drink even more powerful. As well, it’s important to keep hydrated when you have the flu and tea (of any type) will provide you with needed fluids.

Both garlic and onions contain the compound allicin, a powerful flu fighter.  Allicin has strong anti-microbial characteristics.  It is most likely the high content of garlic and onions in homemade chicken soup that gives it the reputation of a “bowl of penicillin”.  In the 18th century in France, peasants drank wine with crushed garlic in it to ward off the Black Plague.

Similarly to the hot peppers, mentioned above, a fragrant soup loaded with these two ingredients can help to clear nasal passages making it easier to breathe.

Ginger tea may help relieve flu symptoms such as headache, sore throat, congestions and chills.  Make the tea by steeping 2 tbsp of fresh ginger in a cup of hot water.  It’s not recommended to exceed 4 grams of ginger per day – components in the herb can cause heartburn, diarrhea, and irritation of the mouth if taken in excess.

A gargle made from salt water can relieve a sore throat.  As well, a study confirms that it can stop a budding infection in its tracks.  Mix I tablespoon of salt with a cup of water and gargle.

Finally, I want to make one recommendation that isn’t a standard addition to most kitchens.  If you purchase one thing to fight off the flu, make it elderberry syrup or extract. Medicinal use of the elderberry goes all the way back to Hippocrates.  Around the globe, folk medicine is full of recipes containing elderberries.

when treating the flu.  For anyone concerned about the possibility of a serious pandemic in the future, elderberry is a vital addition to your home pharmacy.

Elderberry may also help reduce the symptoms of cold and flu and shorten the duration of the flu by as much as three days, according to UMMC. The product used in one study was Sambucol, a combination of elderberries and vitamin C, so it wasn’t clear if it was the elderberry alone, or the combination, that had the effect. In a study released by Retroscreen Virology in 2006, a British medical institute associated with Queen Mary College at the University of London, researchers determined that Sambucol was at least 99 percent effective against the avian flu virus H5N1 and significantly neutralized the ability of the virus to infect cells in culture.

Elderberry syrup or extract can be mixed with hot water to make a tea.  It can also be added to sparkling water and served cold for a refreshing drink that will sooth a scratchy throat.

I always keep a jar of this homemade cough syrup in my refrigerator.  It tastes so good that I don’t have to ask my kids twice to take it.  You can also stir a few tablespoons of the syrup into hot water for a homemade “Neo-Citran”-style hot drink without all the nasty chemicals.

Today, I avoid the pharmaceutical solutions because I choose not to use them.  One day, we could be in a situation where relief is no longer available a few minutes away at our local pharmacies or department store.  It’s important to learn now how to relieve unpleasant symptoms using simple home methods.  This will help you to select the most useful items for your stockpile while allowing you to become more comfortable with using natural solutions.

Do you have some home cold and flu remedies from the kitchen that you have used successfully?  Please share them in the comments!

30 Ways to Reduce Your Risk of Catching the Flu

The Flu Survival Guide: Kitchen Remedies and Natural Strategies to Battle the Bug

How to Reduce Your Risk of Catching the Flu This Year

Did You Know that Nasal Flu Vax Recipients Can Pass the Flu to Everyone Around Them for Up to 21 Days?