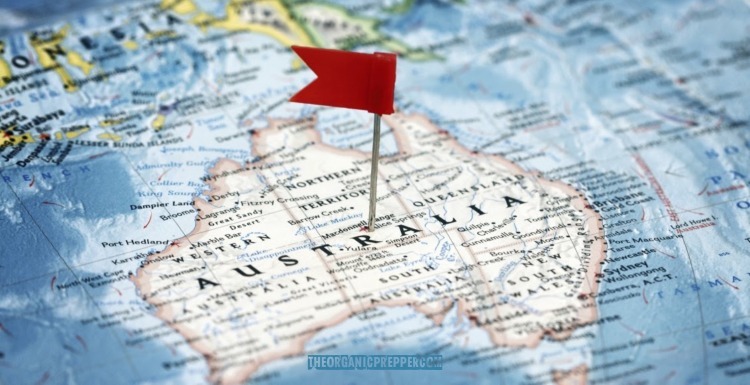 Regular readers of world events have long since understood this fact – that Australia has turned into a fascist state reminiscent of The Children of Men.

We are witnessing the death of free speech

Throughout the course of the past two years, we’ve witnessed the death of free speech in what was once a (relatively) free nation. We’ve seen pregnant women arrested in front of their screaming children for Facebook posts which organized ACTUAL peaceful anti-slavery protests. Police entered her home, told her she had broken the law for doing so, and took her away an hour before she had her ultrasound. You can see the video of it below. Your blood will boil.

Australia has taken things even further

We’ve covered this at TOP before, but it bears repeating. It is within Australia that police can now “legally” change one’s social media posts to say anything they feel to.

With this kind of law MORE pregnant women could be arrested for posting about taking their dog to the groomer. All police have to do is go in, change the post to some violent diatribe, and voila – you’re a criminal. A very convenient excuse to be able to arrest literally anybody for anything, is it not? What is the purpose of this if not to exert complete control over a populace? To instill fear against all for ANY level of speaking out whatsoever. The message is clear: sit down, shut up, and let us do what we want, or we will ruin your life.

Keep in mind, the cops can do this “legally”

Laws were changed to give an air of legality to violating human rights. Where have we seen this before in history? In what other time periods can we find a series of “laws” which were given to allow people to commit egregious acts against others?

If you need a hint, below is some picture help from when Hitler took over Ukraine. And it was all perfectly “legal”.

What goes through a mother’s mind as she holds onto her little one in such a situation? Are her last words “I’m sorry”, as she whispers into her little one’s ears for the last time, an apology for not being able to protect them? Or is it perhaps one last ‘I love you’, the last words that little one will ever hear, as just one more hug is shared?

History is being echoed

Do you think I’m being over the top here? Consider that it was just a few months ago it was “rumored” that Australia was building camps to which they could remove its own citizens. This was widely blasted as a “conspiracy theory” by anybody who brought it up.

“No, that can’t be true. It’s too far-fetched. That’s not really happening,” replied the TV minds.

Then we received further confirmation. It is irrefutable now. Melbourne is building a camp called the “Centre for National Resilience”, a location built for people to sleep until “they are no longer deemed a threat to public health according to government standards.” [source]

Reports state that both confirmed cases and their close contacts in an aboriginal community in Australia were “physically transferred” from their homes to a quarantine facility in Darwin. Don’t worry, though. The government is just “helping” the “vulnerable.”  The police were dispatched to round up and arrest three teenagers who “escaped” from the locked-down facility.

That sounds a lot like…prison.

The state is now your daddy

Even one’s children aren’t safe anymore. Authorities in Australia have conveniently decided they now have the authority to take peoples’ children from them as well. This, in an effort to combat what? What do we call it when children are taken from parents against their will? Whatever happened to government deriving its power from the consent of the governed? Is this not the entire purpose of a government? A collection of representatives who have been elected to protect human rights? To protect life, liberty, and property?

Perhaps I’m missing something here, but I neither see how forcibly pulling children out of homes nor firing into the backs of running protestors does any of this. Americans go to prison if they use a firearm against somebody fleeing – even if they’ve just committed rape or murder. Yet in Australia, a peaceful, anti-slavery protestor’s back is fair game as they run back home. Even if they are “just rubber bullets”.

Evidence that Australian children are no longer safe

Reports are coming down of children being held down and force-jabbed against their will. Here Aboriginal elder June Mills tells the stories of the reports she hears. America must pay heed to these stories coming from Australia. We cannot simply sit back basking under the notion that “It can never happen here.” Just two years ago, Australians were thinking the same thing. In fact, many Jewish people had the same response in the beginning stages of the Holocaust.

“My mother used to tell us not to listen to those stories about German crimes….She told us the Germans were intelligent, cultured people and they would never do such things.” – Sulia Rubin, Holocaust survivor upon hearing remarks of the Holocaust from escaped Jews. (source)

Interviewer : Why are you here today?

I was at the first march, proud to be there. The second March, people we’re afraid. That fear just means False Evidence Appearing Real. Or Face Everything And Recover. A World War 2 Veteran told me that. And that is what fear is. There’s nothing wrong with fear. There’s nothing wrong with anxiety. Courage is just having pain, but still doing what you know the right thing to do is even when you’re afraid. That’s the simple definition of courage. Even when I’m shaking and scared, I still stand up for FREEDOM. We all need to do that.

US. COME WITH US AS A TEAM.

These metals don’t mean anything without these Australians: US as a team. We are a brotherhood. A sisterhood. I have a wife. I have children. I’m a human. I don’t care what color your skin is…don’t care if you call yourself Afro Martha. I don’t care what’s between your legs. If you’re a human, and you want freedom, and you don’t want to be caged, then come with US.

On December 4th 2021 at 12 pm midday, we call for an international SOS from Australia event.

We call upon politicians, international leaders and all concerned citizens to respond to our SOS.

Want to support us? This is what Australia is asking from you:

Our Human Rights Are Gone ~ #SOSfromAustralia

It’s time for our international friends to recognise that Australia is at war with its’ government and we need help.

OUR HUMAN RIGHTS ARE GONE.

Please, international friends…hear our cries for help and apply economic and political pressure on our leaders to change the destructive path we are on. Provide a way for citizens who no longer feel safe here to come home. Offer a certain number of Australians asylum, many of us need it!

The mainstream media is doing little to nothing to cover the crimes against humanity happening in Australia. However, you can help by sharing this information far and wide. Everyone needs to know what can really happen. And don’t think the fact that we’re armed will save us. We, with our arms, just watched our entire economy destroyed in a year as we were locked down, our businesses closed, and our jobs lost. #SOSfromAustralia

Will the tyranny stop at the Australian border?

If you had told anybody that there would be nationwide curfews, reports of young children being held down and jabbed by police, a ban on being outside, and thermal-imaging equipped drones flying around the sky monitoring the population, nobody would’ve believed you.

And yet, here we are.

America can just as easily witness the same. Perhaps Ronald Reagan had it wrong: tyranny isn’t just a single generation away. It appears as if it only needs a year.

Do you think the tyranny will stop at the border of Australia? Or is this a testing ground for just how far people can be pushed in the name of “public health” and “safety?” Share your thoughts in the comments.