Welcome to the Era of Artificial Intelligence and Technological Deceit 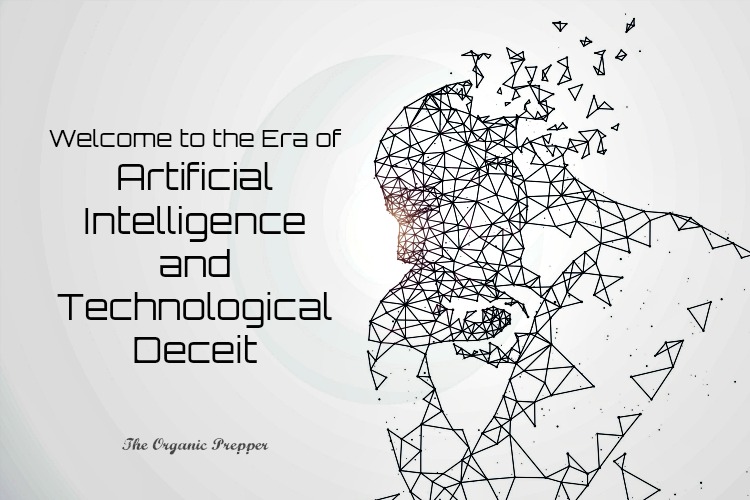 The era of artificial intelligence and technological deceit is upon us. If you think “fake news” and propaganda is bad right now, just wait.

And you won’t have to wait very long, at that.

Pretty soon, computer wizardry and artificial intelligence will allow video footage to be created that is practically indiscernible from the real deal. Add to this holograph technology, and soon, a person could appear to be speaking, live, in front of you, and you’d never even know it was all fake. The ethical ramifications of AI and technology are simply mind-boggling. In fact, some folks even believe it will signal the beginning of the end of humanity.

But apocalyptic AI aside, let’s look at the manipulative potential of our current tech. We are very close to real life meeting science fiction, and if you think we are being deceived now, once these technologies are rolled out, you won’t be able to believe your eyes or your ears.

There are several unsettling parts to this story.

First, there’s the video editing to a new soundtrack.

Researchers at the University of Washington have developed an artificial intelligence software so powerful that it can put words in the mouth of just about anybody. It’s basically like artificially intelligent lip-synching.

…as long as there’s an audio source to use, the video can include realistic mouth shapes that are almost perfectly aligned to the words being spoken. Those synthesised shapes can then be grafted onto an existing video of someone talking…

…There are two parts to the system: first a neural network is trained to watch large volumes of videos to recognise which audio sounds match with which mouth shapes. Then the results are mixed with moving images of a specific person, based on previous research into digital modelling carried out at UW. (source)

Here’s a clip of the software in action.

U of W says that this is actually a good thing and has been developed to help identify fake videos. Because, you know, no one has ever misused technology before.

Then, there’s audio technology that can imitate anyone’s voice with access to a few recordings.

And if that were the only new tech development, it would be bad enough. But a new start-up called Lyrebird can actually create audio that sounds exactly like someone else using “deep learning and artificial neural networks.”

This is an example. It’s kind of rough right now, but how long before it gets polished up?

Even more alarming, this is something that ordinary folks will soon be able to get their hands on. If this is for the layman, can you even imagine what the government and military have access to?

Then, there are holograms.

Do you recall when Tupac (who is supposedly dead or maybe alive, depending on who you believe) showed up a Coachella on the stage back in 2012? If you speed ahead to 2:20 in the video below, the hologram Tupac is on stage with a real person, Dr. Dre, and the difference is nearly indistinguishable.

(Language alert. Come on, it’s Tupac – you didn’t expect him to be squeaky clean, suddenly.)

Here’s how the technology works:

Holography is a broad field, but at its most basic, it is a photographic technique that records the light scattered from an object. The light is then reproduced in a 3D format. Holography was first developed in the 1940s by the Hungarian-British physicist Dennis Gabor, who won the 1971 Nobel Prize in physics for his invention and development of the holographic method.

Our ability to produce dynamic, high-resolution holograms—think Princess Leia pleading with Obi-Wan Kenobi for the Jedi’s help—is currently limited by what’s called wavefront modulators. These devices, such as spatial light modulators or digital micromirror devices, can control the direction of light propagation.

“This problem… can be solved by simply inserting a diffuser,” explains YongKeun Park, a professor in the Physics Department at KAIST. Because a diffuser diffuses light, both the image size and viewing angle can be dramatically increased by a factor of a few thousands, according to Park.

But there’s still one more problem to overcome: a diffuser scrambles light.

“Thus, in order to utilize a diffuser as ‘a holographic lens,’ one needs to calibrate the optical characteristics of each diffusor carefully,” Park says by email. “For this purpose, we use ‘wavefront-shaping technique,’ which provides information about the relationship between impinging light onto a diffuser and outgoing light.” (source)

Fascinating, yet terrifying at the same time.

Think about the ramifications of this.

With all of this technology, some of it soon to be available on our smart phones, how can we believe anything?

How difficult would it be to completely fabricate “videos” of anyone that we are expected to hate?

We live in an era in which false flags are the norm and those in power profit from war. It’s a regular occurrence to create a new boogeyman whenever a conflict is the desired outcome.

Consider the whole chemical attack presumably undertaken by Bashir Assad in Syria against his own people. All we had to go on in the news were suppositions, a video of the aftermath, and some heart-rending emotional coverage.

But, honestly, some of us never really believed this was legitimate because there was no motive. However, lots of folks did believe it, hook, line, and sinker, without any video or any claim by Assad that he was, in fact, responsible. (In fact, he denied it the entire time.) These people were ready for us to go to war against Assad immediately to stop the suffering of those poor, dying children.

What if there had been an AI video and soundtrack of Assad? People tend to believe their eyes and ears, particularly if they have already been prompted to feel a certain emotion. What if there was a “live” speech in front of thousands that was just a hologram?

What if there were AI soundtrack recordings of the infamous “Russia” collusion? What if there were hologram speeches from leaders who had been assassinated stating that, no, they escaped, and here’s what they want their mourning followers to do next.

What if there is an AI speech and an AI video that appeared to be our “enemy” making threats against us?  Maybe one of Jong Un telling his people that yep, we’re striking the US tonight with an EMP that will devastate them for decades. What better way to get our country to be fully behind a military “preemptive” attack than that?

Is this is far-fetched?

Call me a Luddite (trust me, you wouldn’t be the first) but AI is becoming more acceptable every day with Alexa and Siri in every other home in America. We’re being gently lulled into it by “convenience” but are we opening the door to something that could go horribly wrong?

I hope my imagination is getting the best of me, but I certainly wouldn’t put it past the people pulling the strings to use artificial intelligence to manipulate the masses. If the technology exists to deceive people, someone is going to use it.