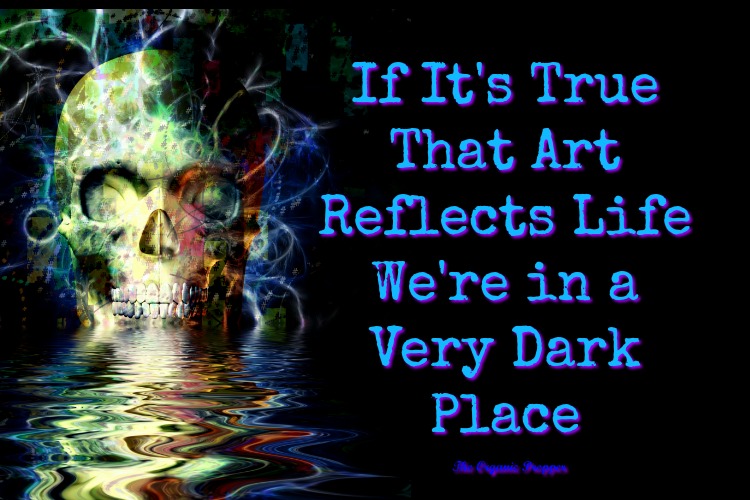 Has anyone else noticed the need that ‘artists” have to be more and more outrageous lately?  It seems like many people can’t be happy unless they are finding greater ways to shock and repulse others. This seems to especially apply to the art community. They say that “art reflects life” and if that is the case, we are really in a dark place.

I’ll give you some stomach-turning examples in a moment, but let me first bring this back to a child-rearing theory I have.

When you have children, you always want to make them happy and give them privileges and opportunities you may not have had. But if you make the mistake of constantly having to outdo yourself, you’ll end up with a greedy monster on your hands. If every Christmas must outdo the last to make a child happy, if every family vacation has to be bigger and better, if every birthday party has to be more outrageous, you’ll find that the recipient of all this bounty is less happy than other people. They’ll always be searching for that excitement and frankly, it’s just not how life works.

Bigger and better is not a sustainable life model. Eventually, the money will run out or the excitement factor will have to be so extreme that it won’t really be that much fun anymore. Everything after a certain point is just a letdown, and the person seeking that rush will often turn to more extreme and unhealthy choices to try and find a state of happiness that will always be brief and elusive.

So, that brings me back to our current societal situation.

I wrote a few weeks back about the signs of the end of an empire, and ever since then, I keep stumbling across more and more examples of this. This isn’t one for reading aloud around the family table. Assuming you do things like that with blog content.

Whose life does this art reflect?

Regular art that’s just pretty to look at will no longer make you famous, it seems. Gone are the days of Renoir and Matisse. To get your five minutes of fame, your medium must be something outrageous, stomach-turning, and/or revolting.

Maybe I just don’t understand art, but here are some examples of artistic expressions and crafts with a homemade touch that I’m not going to be purchasing anytime soon:

What is this obsession with bodily fluids all about? FYI, it’s illegal to buy it on eBay. In case, for some reason this article inspired you to make your Christmas list.

Who can forget the horrifying “art” that came into the public eye during the Wikileaks days of the last election? While folks are making poop statues of President Trump, they’d be advised to remember the revolting “Spirit Cooking” performance art that came to light in the Podesta emails. This was mockingly defended by NYMag as a silly overreaction by the anti-Clinton faction.

Tony Podesta, who is now in a whole bunch of legal trouble, has some horrifyingly pedophiliac artwork in his collection that people seem to be willing to justify as well. See for yourself, but be warned, this stuff is terribly disturbing.

There were also hints of cannibalism with some “performance art” dinner parties. Thankfully, we have outlets like Art-Net News to tell us how silly we are to find it disturbing to watch people digging into a cake that looks like a woman and to see sickening photos of young children in occult situations.

This isn’t new but it seems to be a lot more common now.

Of course, it’s important to note that artists have been using bodily fluids and shocking topics in their art for decades. Centuries, even. Andy Warhol had his friends pee on a canvas back in the ’70s, and there was that other guy who taunted religious people by sinking a crucifix into a variety of bodily fluids and then took photos of it in the ’80s.

Also in the 80s, a guy named Robert Mapplethorpe got an art show that contained photos which could only be considered child pornography. ““For pedophile homosexuals, there [is] a shot of a nude little boy, about eight, proudly displaying his penis.” The photograph in question was Jesse McBride which, along with a portrait by Mapplethorpe of a young girl staring into the camera with her genitals incidentally exposed.” (source) As well, his art contained very graphic sadomasochistic content.

Both these shows in the 80s, by the way, were supported by tax dollars via the  National Endowment for the Arts.

So, this has been going on for a long time but seems far more prominent of late.

Doesn’t it make you wonder, with vast trepidation, what could possibly be next?

How will the art community possibly take things even further than they are now? I shudder to think what outrageous acts and photos will be the next thing to be celebrated for their genius. It is said that “art reflects life.” Let that sink in – the stuff above is a reflection of the people who created it.

But in most of America, the part that rejected Hillary Clinton and her ilk and is deplored by the people who love this “art”, is busy living a life that must seem boring to the flashy folks of the art world. While they snicker at us, though, we are able to find happiness in simplicity. Going for a walk in the woods, the satisfaction of raising vegetables in our backyard, encouraging our kids to be athletes and scholars – give me that over poop paintings, vagina scarves, and cannibalism any day of the week.

These poor souls will continue to seek their rush that resides ever further into depravity. They’ll push the limits further and further. At some point, they won’t be able to turn back. Maybe they’re already there.