Now APPLES Are Recalled for Listeria 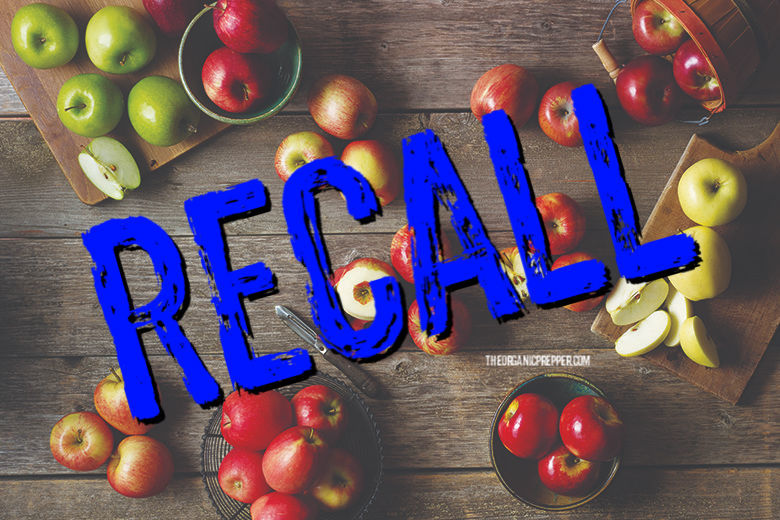 On October 25th, 2019 North Bay Produce Inc. voluntarily issued a recall of certain varieties of fresh apples due to the potential of being contaminated with Listeria monocytogenes. The recall was initiated as a result of a product test that revealed that finished products contained the bacteria.

Listeria monocytogenes, usually known simply as Listeria, is a foodborne pathogen that causes listeriosis in those who ingest foods contaminated with it. Listeriosis has a mortality rate as high as 24%.  In research found in the National Library of Medicine and Institute of Health (NCBI) one can find a journal list dated September 1991 that reveals:

“L. monocytogenes in both sporadic and epidemic Listeriosis was unknown as recently as 10 years ago (1981), though direct transmission from infected animals to farm workers and veterinarians was well documented for cutaneous lesions. However, …an outbreak occurred in the Maritime Provinces of Canada between March and September 1981.”  (Microbiology Review pg. 486)

The child mortality rate of that outbreak was 27% and the adult mortality rate was 28.6%.  The culprit?  Coleslaw made from the cabbage from a farmer who raised cabbage and kept a flock of sheep; two of which had died from listeria.  The cabbage had been grown in fields fertilized by both compost and raw manure from the sheep.

How did apples get contaminated?

So exactly where and how did the apples recalled this week get contaminated?

Possibly the same way as the cabbage was in 1991.  Almost all farm fields are irrigated with water; water that can be contaminated with bacteria, and any fertilizers made from manure can contain bacteria.

If the produce isn’t cooled quickly enough after a harvest, the bacteria can get a good grip before any preventive measures can be applied. It then produces a biofilm that protects the bacteria and helps it grow. I suddenly feel like I’m writing about Killer Tomatoes… or rather, Apples.

Apples (or any other produce) can be contaminated with bacteria at any point from the fields to the packing house to the distribution center to the trucks to the store to the produce section. Any worker who is sick can transfer bacteria to the produce. As well, apples are supposed to be kept off the ground, and the baskets or boxes they’re stored in are not supposed to touch the ground either. These rules, however, aren’t always followed, and some aren’t even encouraged.  Although most restrooms have at least one large sign encouraging people to wash their hands after using the bathroom, it isn’t policed, and even today you can get in big trouble for not showing up at work despite being sick.

For more information on why there are so many recalls lately, check out this article.

Which fruit is affected?

The recalled product was shipped directly from the company to retailers, brokers, and wholesalers in the following states:

The FDA and wholesale customers have been informed of this recall.

The recalled varieties include, but may not be limited to:

How serious is listeria?

Listeria (Listeriosis) can be fatal – make no mistake about that.  The symptoms vary depending on the person and the part of the body infected. It can cause fever and diarrhea just like any other foodborne illness.  Anyone can get listeria, however, those who are more susceptible are pregnant women, the elderly, and those with weakened immune systems. As Dagny Taggart wrote in her article in early October:

“Over 90 percent of people who become infected with it are hospitalized. It carries a mortality rate of 20 to 30 percent. Symptoms can appear as early as the same day of exposure, or as late as 70 to 90 days after infection. It can live in cold temperatures, multiplies rapidly, and can live for years on equipment in places food is prepared.” (source)

Can we prevent it or kill it?  According to Forbes, normally listeria can be washed off fruits and vegetables, but there are people who are extremely sensitive to listeria and, for them, washing doesn’t matter – it “can cause severe illness or even death”. NPR, in regard to a listeria outbreak three years ago, had this to say.

“Listeria can be killed with proper cooking, but unless you’re going to use a thermometer to make sure the foods reach 165 degrees F, it’s best not to risk it. If you did eat them and have symptoms such as fever, stiff neck, confusion, loss of balance and convulsions, seek medical care. Listeriosis kills 1 in 5 victims. Sometimes listeriosis symptoms develop up to two months after eating contaminated food, but they usually start within several days.” (source)

The symptoms of Listeriosis

Unfortunately, and sadly, many of the first symptoms of listeriosis mimic influenza, like many other foodborne illnesses, so if you have food on any recall lists, if you have doubts about the food you do have, or if you simply just don’t know how old it is or it shows signs of going bad, throw it out.  And, most importantly, if you develop any symptoms, see your healthcare professional immediately.

Some of the earlier and lighter symptoms will likely last 1 to 3 days.

If you develop any of the above symptoms, please see your doctor immediately.

For more information on Listeria (Listeriosis) visit the Centers for Disease Control at CDC.gov/listeria

Other informative articles of interest on Listeria: