All Hell Has Broken Loose In Chile: VIDEOS 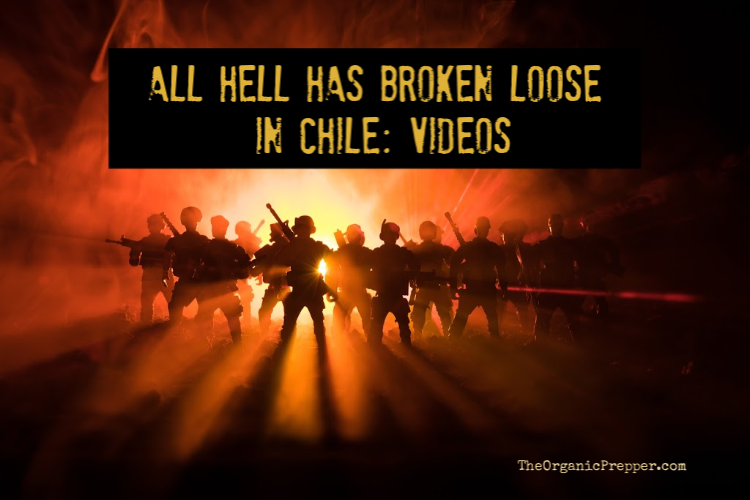 The S has hit the F in Chile.

Citizens are protesting economic inequalities in the country. The protests began after the government raised metro prices, which appears to have been the final straw for the people.

It sure looks like martial law has been imposed there, in response to civil unrest.

This is a developing story. The reasons for the protests are complicated – we are looking into it and will have the details soon, but for now – take a look at some of these videos from Twitter:

THIS IS CHILE RIGHT NOW.
The government set the military on the streets just because people were demanding rights. Salaries aren’t enough.
WE ARE A DISARMED COUNTRY. They fight us with guns and we have bare hands.
Media is censoring this, please RT. MAKE THE WORLD SEE.🇨🇱🇨🇱 pic.twitter.com/jLrPwW7G75

They are shooting with rifles at everyone. This is so scary, nobody is pointing weapons to them, nobody is even near them.. pic.twitter.com/fjAyHpweAG

In this video they tackled a person for waving a flag and lifting up a poster. I don’t see any vandalism or burning down things or taunting cops, just protesting for rights. What’s the excuse now? Right, there’s NONE.
Props to this media’s page to show these kind of videos. pic.twitter.com/uYkZf17V5V

In Chile, a deadly weekend of arson, riots and armed forces as discontent rises. https://t.co/diI7TgKJ3S pic.twitter.com/gue8niJk8A

When looking at the violence on the streets in Chile keep in mind this footage of riot cops snorting cocaine before heading off to batter protesters pic.twitter.com/KLzi6YdG1R

#Chile | Right now, in the north of Santiago. #ChileEnResistencia pic.twitter.com/iJXKtSyURL

#Chile | Today, line 4 of the Santiago subway during intense protests that were carried out against increased fares. #ChileEnResistencia pic.twitter.com/GiReMjvZLp

It's been 30 years since the 16 years dictatorship ended, it's 2019 and here we are, the military forces are back on the streets, the nightmares of our parents are now ours. This is what is going on in Chile.#EstoPasaEnChile pic.twitter.com/uzkvoZa2O0

The government has declared a state of emergency, for the first time since Augusto Pinochet's military dictatorship. #ChileProtests pic.twitter.com/ddRDoBljBg

‼️
I'M FROM CHILE AND PEOPLE ARE DYING AT THE HANDS OF THE KILLER STATE, WHO WANT US TO BE IN SILENCE AND SCARED, THE ARMY IS IN THE STREETS SHOOTING EVERYONE WHO CROSSES THEIR PATH, AND KIDNAPPING PEOPLE IN CIVILIAN CARS. IF I DISSAPEAR, YOU KNOW WHO THEY ARE. #ChileDesperto pic.twitter.com/hNbk49aCYQ