The Case for Air Rifles and Pistols

(NOTE: Air Guns are NOT toys. When used improperly, an air gun can cause serious bodily harm or even death. Treat with proper respect and safety as one would of any firearm. Remember and practice the rules of firearm safety at all times.)

Recently, I have read more than a few people talking about the availability of ammunition or lack thereof and the ubiquitous training round, the .22LR rim fire.

For your consideration: Air rifles/pistols.

Air rifles and pistols exercise all the same fundamentals of marksmanship, just at shorter ranges and can even be used for hunting. In light of more than a few ranges being closed due to COVID-19, a number of air guns are backyard friendly. No hearing protection required, but as always, eye protection. Your neighbor will not even be aware you are shooting.

But safety first! You are responsible for every shot taken. Know where the pellet is going to go. Have a backstop with sufficient stopping power.

RELATED: Selco’s Principles of Successful Makeshift Weapons When You Don’t (or Can’t) Have a Gun

The Break Barrel – The barrel is used to compress either a coiled spring or a gas spring. The effort to compress the piston can vary from easy to requiring a degree of strength. Some manufactures will list this effort, called “cocking effort,” in pounds. The pellet is loaded and then the barrel is returned to the firing position. When the trigger is squeezed, the spring is released, drives a piston into a compression chamber and the air is then forced into a transfer port to the barrel and sending the pellet down range. 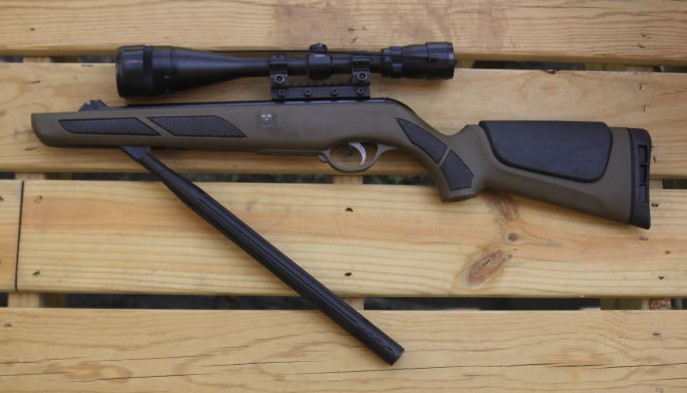 There are variations called a Underlever. The barrel is fixed, and a lever is located under the barrel that compresses the piston. Most are single shot, requiring a manual reload after every shot, but there are newer multi-shot break barrel air rifles out there.

One note about these types of air guns is you will need a spring or gas piston rated scope if you choose to use one. The recoil action of the piston is different from a regular firearm. While the recoil is NOT substantial, a scope not rated for air use, will not last long (i.e. they get wrecked).

Single Stroke Pneumatic – A lever is used to force air into a set volume reservoir, generally very small. When the trigger is squeezed, the air from the reservoir is released into the barrel and sending the pellet on its way. Generally these are lower powered pellet rifles or pistols, more common in economic target shooting or plinking. Some of the heavier single strokes can be used for short ranged hunting, less than 30 yards for a humane kill, with proper shot placement. 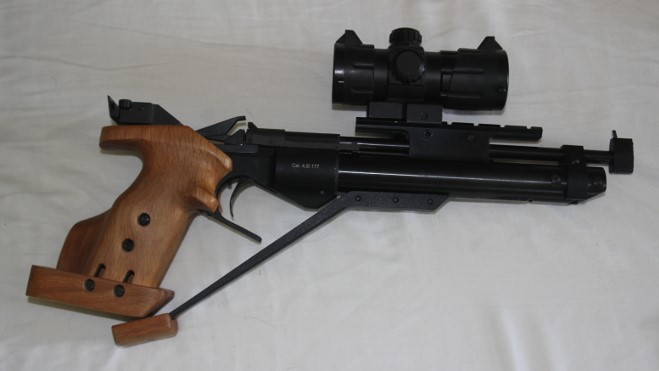 The trigger and the sights are excellent. There is no safety, as you are the safety. There is nearly no recoil. I put a mount on it so I could also use a red dot with it. It is very accurate, more so than I.

Below is a Crosman 1377, multi-stroke pneumatic pistol. The trigger is surprisingly decent, but the sights are bloody awful. Once you get used to the Point Of Aim (POA) vs Point Of Impact (POI), the sights are just “okay.” It is cheap and fun for plinking.

A carbon dioxide (CO2) is powered by a cartridge containing a set amount of CO2 gas in 12-gram, 88-gram or 90-gram cartridges. Most (but not all) are pistols, with some CO2 rifles that can take 2 cartridges or larger ones, with a few duel “fuel” (air or CO2) rifles out there. The CO2 cartridge has a limited shot count that varies from air gun to air gun and the weight of the pellet used. As more shots are taken, more CO2 used up, eventually the Point of Aim vs the Point of Impact will diverge, the shots will fall short of the Point of Aim and a new cartridge will have to be installed.

One advantage of CO2 is a number of actual firearms manufactures have licensed their center fired pistols with CO2 replicas. These CO2 pistols are identical to their center fire big brothers in weight, and feel with the same fire controls in the same places. Some even have a “blowback” feature that mimics the cycling of the action of a center fire pistol.

Many people use these as a cheap and convenient training tool from drawing from their actual center fire pistol hostler. At shorter ranges a BB CO2 generally does not have much difference from a rifled pellet CO2.  At extended ranges is where the differences will appear. I have seen some reviews of these replicas in the negative sense as the sights can be off and there is no way to adjust them.

There are some target CO2 pistols.  They have rifled barrels, better sights, better triggers and most get 50-60 shots per CO2 cartridge with consistent speed of the pellet, meaning better precision.  Naturally they cost more.

Pre-Charged Pneumatic (aka PCP, not the illegal drug) – These are rifles and pistols that have a on-board air reservoir that can be filled with a special air compressor, a Self Contained Breathing Apparatus (the tanks Fire Fighters use for air), Self Contained Underwater Breathing Apparatus (the tanks SCUBA divers use), or a special high pressure hand pump (looks like a bicycle pump).  Those are additional costs that have to be factored into the over all cost.

Depending on the caliber, weight of the pellet, volume of the air reservoir, will affect how many shots you can get per fill of the air reservoir.  A .177 caliber 10 meter Olympic air rifle can get nearly 100 shots per fill.  My .22 caliber air rifle will get about 50 shots before needing a refill. 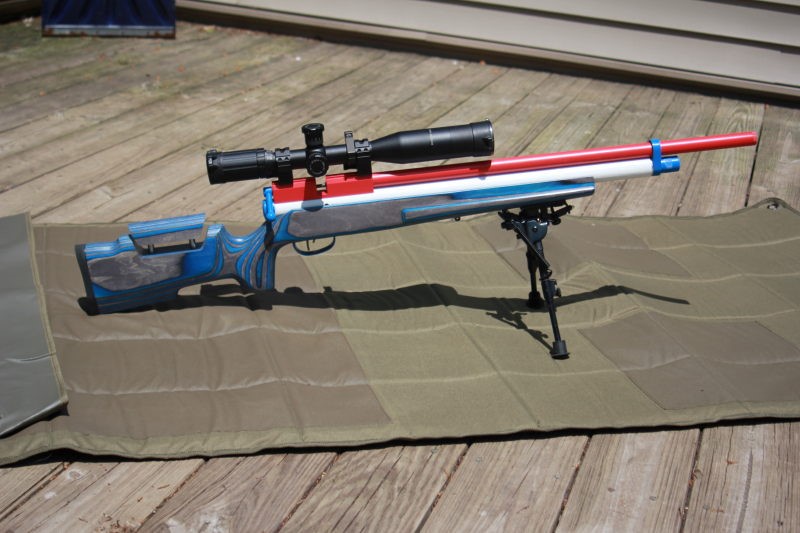 A little back story first: At first, I bought the break barrel rifle in .22 caliber. Added a better scope. Never thought I would ever need anything more than that for simple target shooting, right?

Yeah, not so much.

Two years later, found myself looking at PCP rifles. Talked myself out of and back into the idea of buying one a dozen times over.

I bought a Benjamin Marauder in .22 caliber for about $500, another $200 for the hand pump. Scope was sold separately, but I had other scopes laying around, just needed rings. PCP rifles operate on a different firing mechanism than a Break Barrel with the PCP having nearly no recoil. You can mount any center fire scope on a PCP.

First time I pumped it up, loaded the magazine with ten-pellets, and took a shot off the back deck. It was so quiet, no recoil, I unloaded the magazine, and ran a .22 caliber cleaning rod down the barrel to make sure the pellet was not stuck in the barrel. Nope, it went down range!

Fully adjustable two-stage trigger, this rifle was very, very good. I was getting outstanding groups once I found the right pellet (most air rifles and pistols have a preference for a given pellet). A few years later, we had a rat issue. I got some Crow Magnum pellets (hollow points) and that air rifle, those pellets, a fixed 4x power scope made short work of the rats.

Last year I had the opportunity to modify the Marauder. I put on a Boyds stock, a Hill Air Gun Premium Regulated Matched Parts kit, and a DuraCoat paint job. The Boyds stock just made it a better fit from any shooting position. The Hill Air Gun kit, gave me a regulator which made for a set air usage per shot, for more consistent shots, and more shots per fill (30 shots pre-modified vs 50 post modified).

The paint job is just what I wanted. I like it.

RELATED: The Importance of Silent Self-Defense Weapons in Secluded Places

How much is it going to cost me?

Air guns range in from the very affordable less than $100, to a few thousand dollars. Even .177 Olympic 10 meter air rifles can run into the $3,000 range. With one of those high end rifles and even pistols, Olympic accuracy and precision are there if the shooter can get him or herself there.

Big bore caliber PCP air rifles have made advances in recent years. (.30, .357/9mm, .45 and even .50 caliber are now available. ) Some states are allowing deer hunting with certain calibers of air rifles. But you will only get a few to at most several shots per fill and they are NOT backyard friendly!  They will require ear protection. There are more than a few YouTube videos out there of people making serious, consistent, long range shots with a big bore PCP. Not for hunting, but for target.

The price of ammunition can vary, but usually the larger the caliber the higher the cost. You can generally find low end .177 and .22 caliber in the sporting goods section of Wal-Mart or big box sporting goods stores. Match grade .177 or .22, on-line air gun specific sites are best for those and for the big bore pellets, bullets or slugs. For about $60, I can have 2,000 match grade, .22 caliber pellets delivered to my door, no Haz-Mat fee.

And what about maintenance?

Most air rifles are easy to work on (NOTE: render all air guns safe, unloaded and decompressed of all air), and with proper maintenance, can provide years of use.

My IZH46M is still on the original set of o-rings from 2003. After thousands of pellets, I just recently had to replace the o-rings in my Marauder bought in 2014.  For $12.75, I got two complete sets of o-rings. A little silicon grease and I am good to go. Some of the more popular air guns have many after market parts. Many air gunners will modify their air guns for more power, for more shot consistency, or accuracy.

In the current shortage of ammunition, or lacking a place to train, an air gun may be a more viable option for training, or maintaining the fundamentals of marksmanship. Some can be both used as for training and for hunting small game very quietly, more so than a suppressed .22LR. 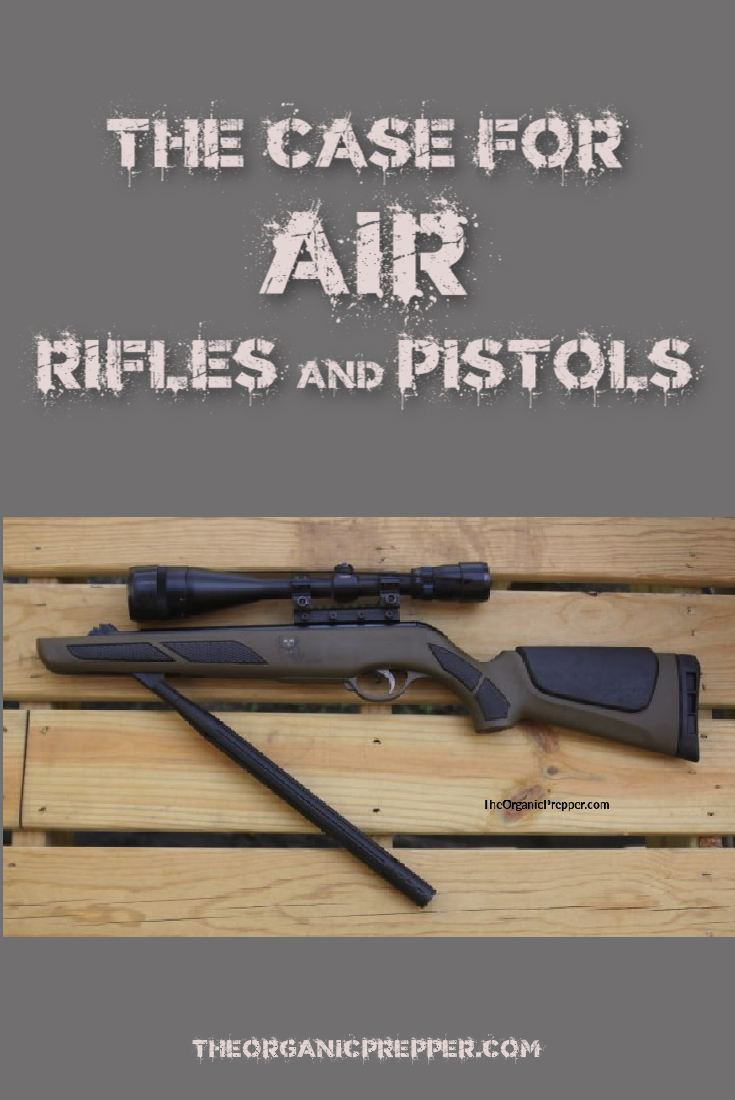 How to Prep for a Cyberattack