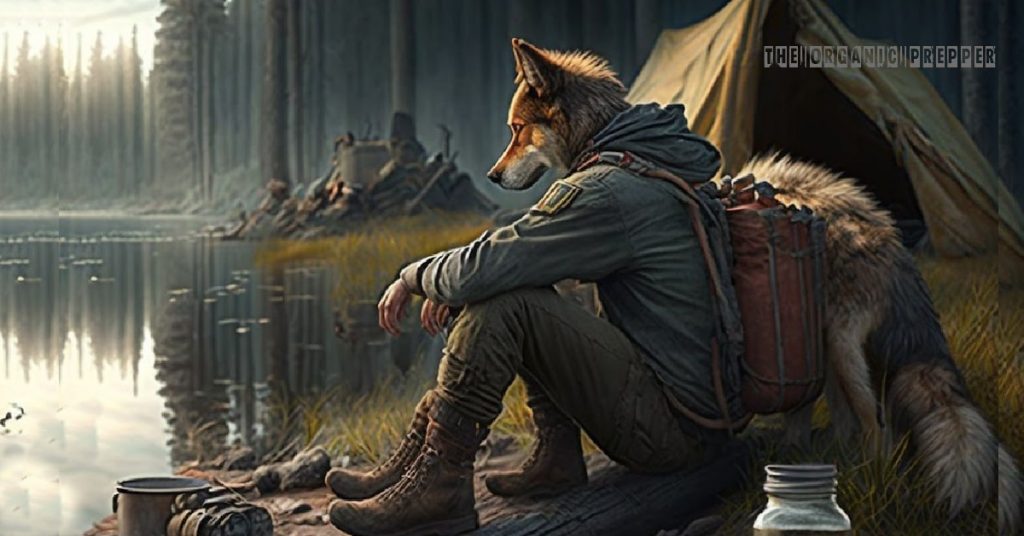 I’ve been reading some of Aesop’s Fables lately, and I think there are some gems in his stories that are not only applicable to life, but can particularly be useful within the survival setting. Here’s my take on a few of them.

The Goose That Laid the Golden Eggs

I would sum this one up as this: Be careful what you risk.

I’m totally armchair refereeing this, but I think a perfect example of this would come from Alone where Jose Amoedo decided to make himself a little kayak (which was stinkin’ incredible) to paddle across a half-frozen lake. He fell in the water and had to leave the show.

I thought this was a huge risk with massive consequences. (To Amoedo’s credit, he is one of the most incredible masters of bushcraft I’ve ever seen. I just didn’t think paddling across super cold water in a tarp boat when he didn’t need to was a good idea.)

If you find yourself trapped in your car during a snowstorm, lost in the woods with a broken leg, or whatever, you’re going to be forced into situations where you have to take risks, but you want to choose acceptable risks.

The Cat and the Birds

I think this one mainly applies in a Golden Horde-type situation. You’re living in a WROL situation, you have your farm, and there are people that want to join the farm that you know but do not trust. Don’t let the cat into the birdhouse.

The Spendthrift and the Swallow

Don’t make a drastic decision because of one trivial “sign” that you’ve witnessed.

Sure, if there are a collection of indications that lead to one logical conclusion, then it’s a good idea to act accordingly. But if you’re broken down in the middle of nowhere and haven’t seen another car drive down the road in the past three hours, that by no means indicates that you have to hike three hours through the freezing rain to try to find help.

The Lion and the Mouse

This is a classic Aesop story where a mouse pulls a thorn out of a lion’s paw. The small can often do a lot for the large. Think about Taiwan and the percentage of microchips that they produce for the United States. Think about all of the things that have microchips in them – tanks, jets, radios, computers, CBRN detection equipment, etc.

Without the mouse, is the lion reduced to a weeping mess?

The Crow and the Pitcher

Necessity is the mother of invention. Finding yourself in a survival situation – whatever that may be – means that you are going to be forced to be creative. I think it was Creek Stewart that said survival is about finding out how to get what you want with what you have.

You’re stuck in the woods with no food, water, or shelter. How can you use the gear that’s on your person to get those things?

The North Wind and the Sun

I think this one applies mainly to relationships in a survival setting. You’re stuck in the Andes in a plane crash and you all desperately need food. Forcing somebody to march out for civilization for food isn’t going to work. But showing them why that’s needed, why they want that, and how they can help other people by doing so?

That’s persuasion (which is different than manipulation, mind you) and it works much better to accomplish the end result.

The Boy and the Filberts

“Do not attempt too much at once.” If you’re in a survival setting, don’t let yourself get overwhelmed by too many things at once. Focus on one task at a time.

Your car broke down in the middle of nowhere, it’s 2 degrees outside, and your phone is dead. One thing at a time. Figure out how you’re going to stay warm. Figure out how to passively signal for help. Figure out where you are.

A forest is felled one tree at a time.

The Wild Boar and the Fox

This story is nothing more than “it’s better to have it and not need it, than need it and not have it.”

Really, this is the story version of prepping.

If you find yourself in a survival setting, whether that be being lost in the Alaskan wilderness, lost in a foreign city where you don’t speak the language, or with a broken-down car in the bad part of town, it’s a good idea to have prepped beforehand with some means of self-defense, communication, maps, etc.

The Stag at the Pool

Far too often we get hung up on the coolest new knife, gun, tomahawk, or whatever. Those things are all cool and fun, but it’s the simple, little things that we often take for granted that really matter when it comes to saving lives.

Do you have a tourniquet to stop somebody from bleeding out after an active killer scenario? If you’re lost in the woods, do you have some type of metal container to boil water with? Is Neosporin a part of your preps so that you can keep somebody from getting an infection in a grid-down environment?

Not as “cool” but just as important.

The Lark and the Farmer

Self-reliance is what gets the job done, not somebody else. If you wait for somebody else to come and save you without taking any actionable steps when you’re lost on the hiking trail, stranded on the side of the road, or buried under an avalanche, you’re toast.

There’s nothing wrong with occasionally receiving outside help, but as an adult, you shouldn’t make banking on that from some other human being here on earth be your go-to plan.

The Stag with One Eye

“Misfortune often assails us from an unexpected quarter.” Make sure you have your bases covered. Having plenty of food and self-defense gear is great, but have you neglected everything medical? You may have one of the greatest tents on the planet, but what are you going to do if it gets a tear in it?

That’s a cool fire striker. It’d be a shame if, you know, you dropped it in the fire.

The Eagle, the Jackdaw, and the Shepherd

Have reasonable expectations with your bushcraft skills if you have to use that to survive. If you end up lost while cross-country skiing, the notion that you’re going to build an amazing shelter, catch 15 rainbow trout, and build a fire in the next two hours before sun sets is ridiculous.

Everything takes three times longer than it should, the laws of thermodynamics say that entropy exists, and accidents happen.

Budget yourself extra time when it comes to completing any type of survival task and don’t set your standards at the moon. Be happy if you just reach Tallahassee.

The Caged Bird and the Bat

Get your preps in gear before you need them. Figuring out while you’re freezing to death in your car that you should have kept the tank filled above a quarter of a tank, kept blankets in the car, and dressed warmly is a little after the fact.

Everybody makes mistakes and the fact that survival is about creativity is because you don’t have what you need but do what you can to ensure that if you are placed in some type of survival situation that you at least have some gear at your disposal.

The moral of the story…

These are at least some of Aesop’s Fables that I think could be applicable to survival. Do you know of any more? Do you have any other thoughts on the ones mentioned here? Are there other fables or stories you always mentally apply to survival? Let us know in the comments section. 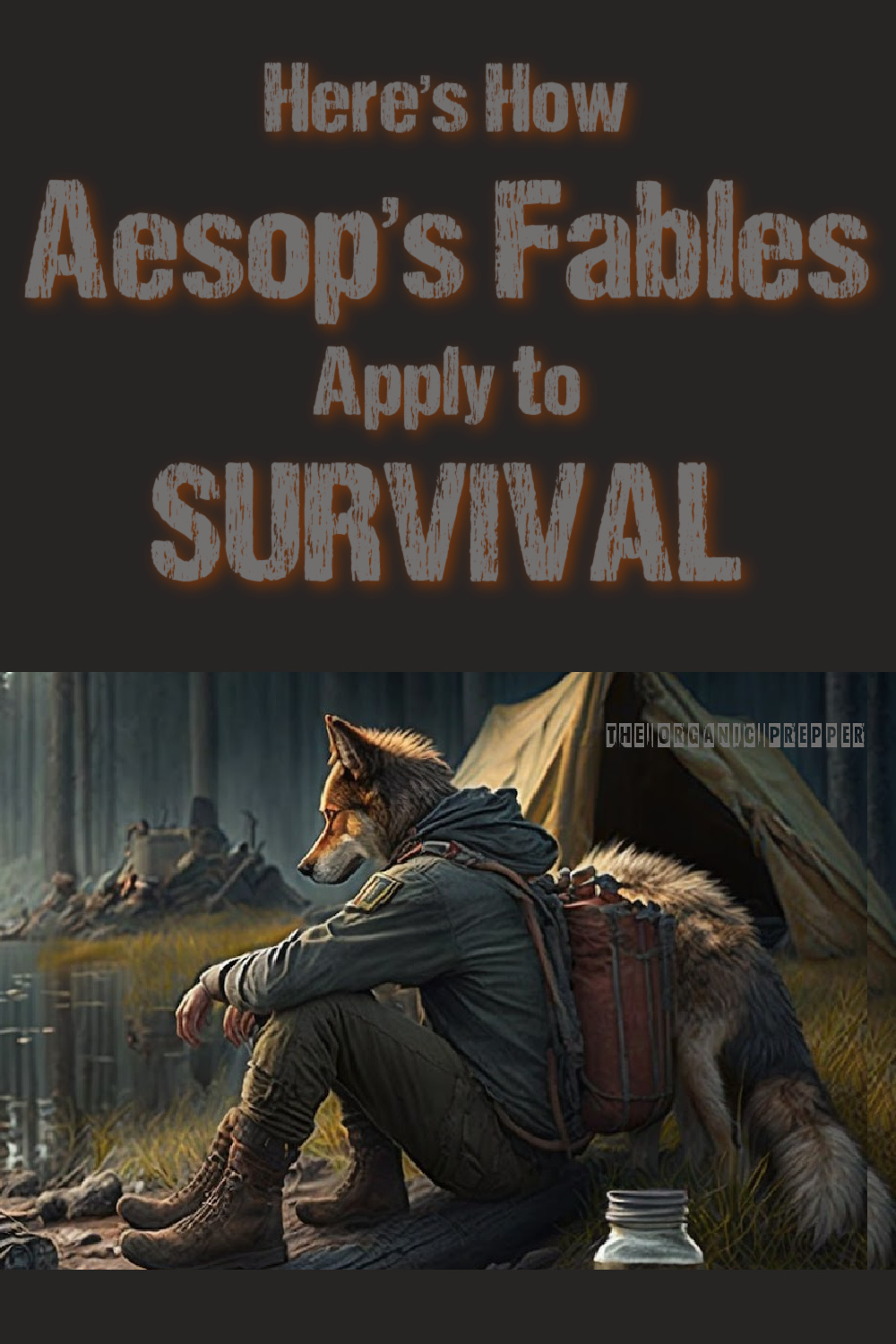