If you have ever brushed off the idea of FEMA work camps as a myth, a fantasy of an overactive Patriot imagination, then you must not have heard about the Magdalene Laundries in Ireland, where young women were incarcerated, often without trial, without a definitive sentence, and sometimes, without even committing a crime worse then being “too pretty” and therefore, tempting men.

Does this remind anyone else of the NDAA?  Indefinite detention? No trial?  No cause?  These girls were simply locked up and forced to work until those in power saw fit to release them.

Magdalene Laundries were in operation as recently as 1996 – that’s right – 16 years ago, young women were enslaved indefinitely in a colluded effort between the Catholic Church and the Irish government.

Between 1922-1996, Irish women were put to work in “laundries” that were run by Roman Catholic nuns.  There is some discrepancy on the number of women so incarcerated.  Between 10,000-30,000 women were put to forced labor for the financial benefit of the church, however.

Less than 1000 women who endured the laundries are still alive today.  Survivors maintain that the doors and windows were locked, and that if they escaped, they were brought back by the police.

Most of the women were under the age of 23.  The youngest girl admitted was 9, and the oldest was 89.  Singer Sinead O’Connor is one survivor of the Magdalene Laundries.  She wrote an editorial for the Washington Post in 2010 about her experience and her opinion on the priorities of the Church:

When I was a young girl, my mother — an abusive, less-than-perfect parent — encouraged me to shoplift. After being caught once too often, I spent 18 months in An Grianán Training Centre, an institution in Dublin for girls with behavioral problems, at the recommendation of a social worker. An Grianán was one of the now-infamous church-sponsored “Magdalene laundries,” which housed pregnant teenagers and uncooperative young women. We worked in the basement, washing priests’ clothes in sinks with cold water and bars of soap. We studied math and typing. We had limited contact with our families. We earned no wages. One of the nuns, at least, was kind to me and gave me my first guitar….

An Grianán was a product of the Irish government’s relationship with the Vatican — the church had a “special position” codified in our constitution until 1972. As recently as 2007, 98 percent of Irish schools were run by the Catholic Church. But schools for troubled youth have been rife with barbaric corporal punishments, psychological abuse and sexual abuse. In October 2005, a report sponsored by the Irish government identified more than 100 allegations of sexual abuse by priests in Ferns, a small town 70 miles south of Dublin, between 1962 and 2002. Accused priests weren’t investigated by police; they were deemed to be suffering a “moral” problem. In 2009, a similar report implicated Dublin archbishops in hiding sexual abuse scandals between 1975 and 2004.

Why was such criminal behavior tolerated? The “very prominent role which the Church has played in Irish life is the very reason why abuses by a minority of its members were allowed to go unchecked,” the 2009 report said. 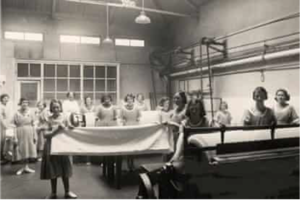 Survivors have shared many horror stories. When the women arrived, most had their long hair cut short, or even shaved off, which was the beginning of the humiliating enslavement.  Strict silence was enforced, and infractions resulted in corporal punishment.  There are reports of physical, psychological, sexual and emotional abuse.  The laundries started out as homes for “fallen women” – prostitutes, but soon, the doors were opened to incarcerate the mentally retarded, those with learning problems, abused women and girls, and unwed mothers.  Females who committed crimes like shoplifting or not paying for a train ticket were sent to the laundries and eventually, even promiscuity, flirtatiousness, or being  “too beautiful” were crimes punishable by enslavement in the workhouses.

Meanwhile, the Church was making money from paid contracts for the women’s labor.  The contracts demanded the legally required “fair wages” for the women’s work, but the women did not get paid a single penny of that money.  All the revenue went to the Church.

Prominent Irish businesses, government agencies, and the Church itself  were listed in the ledgers as clients of the laundries:   Áras an Uachtaráin, Guinness, Clerys, the Gaiety Theatre, Dr Steevens’ Hospital, the Bank of Ireland, the Department of Defence, the Departments of Agriculture and Fisheries, CIÉ, Portmarnock Golf Club, Clontarf Golf Club and several leading hotels

Notable to the current day is first, the recent existence of these work camps.  During our adult lives, women were being treated as slave labor – not in some distant third world hellhole, but in Europe, part of the so-called “civilized” Western world.  This isn’t something that happened many centuries ago – the doors closed less than 20 years ago.

As well, this could be considered a case study in the incremental enslavement of a group of people.  The laundries went from a reformatory for prostitutes to a voluntary respite for unwed mothers to a prison for women who had only committed petty crimes, to those whose only crime was being prettier than others.  Is it a stretch that one of the many empty FEMA camps might start out housing the victims of a natural disaster, then overreach to keep them there, involuntarily?  Could the reach of those camps then stretch to encompass those who believe differently, behave differently, learn differently or look differently?  Remember, the Magdalene Laundries grew to encompass more and more “crimes” as time went on – including some things that were only crimes from the perspective of the church or a bitter judge.

This demonstrates clearly how those in “power” seem to feel that the laws and mores that confine the rest of the world do not apply to them.  The Catholic Church has a long history of covering for the sexual predators in their ranks. (How often have you read about priests who commit the grave sin of molesting the children of their congregation simply sent to be the wolf among a different flock?) In this case the Church knowingly profited from slavery for close to a century.  Governments in general are rife with corruption, no matter what part of the world they are in.  In Ireland, women who were outside the norm were the targets.  Is it hard to imagine that a group that vocally disagrees with the government could not be likewise targeted, especially considering the facilities in which to house them already exist?

Finally, the Magdalene Laundries were publicly allowed free reign in enslaving and abusing the inmates, granted by the Catholic Church and the Irish government.  (The combination of Church and government has never boded well for those under the thumb of the two. )  This occurred right under the noses of “good people”, who were brainwashed by Church and media to believe that it was acceptable.  The entire society didn’t have to be overthrown to allow this to happen – they just had to be convinced (read:  programmed) to believe that this was for the safety and moral well-being of the community.  It is not far fetched to imagine the same thing happening right now as the media paints Patriots, preppers, gun owners, and survivalists as domestic terrorists and loose cannons from whom the public needs to be protected. 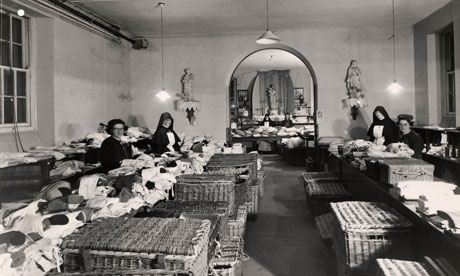 Thank you, Xeenaa, for posting a link to the original story!