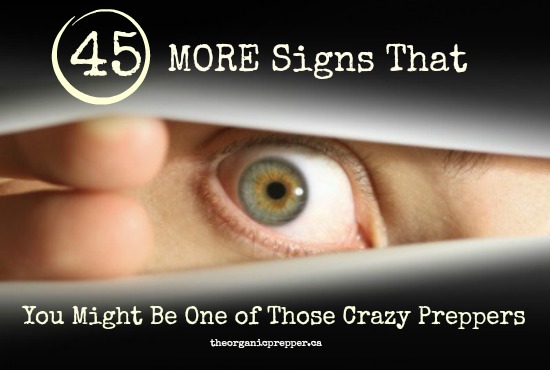 A while back, I wrote an article called “30 Signs That You’re One of Those Crazy Preppers.”  Lots of readers got into the spirit of things, since it was pretty darned relatable.  We all know these are actually signs of sanity, but we’re used to being misunderstood by the unprepared and sometimes it’s fun to have a good laugh about their misconceptions of what we actually do.

Then Ebola happened, here on American soil, and a lot more people jumped on board the preparedness bandwagon.  To welcome the newbies, here are 45 MORE signs that you might have crossed over to the “prepped side.”  (Many of these came straight from the readers!)

Many of these will be things that non-preppers just can’t understand, but they’ll probably give you a warm glow. Feel the prepper solidarity!

Can you relate?  What are some other signs you might be a “crazy prepper”?