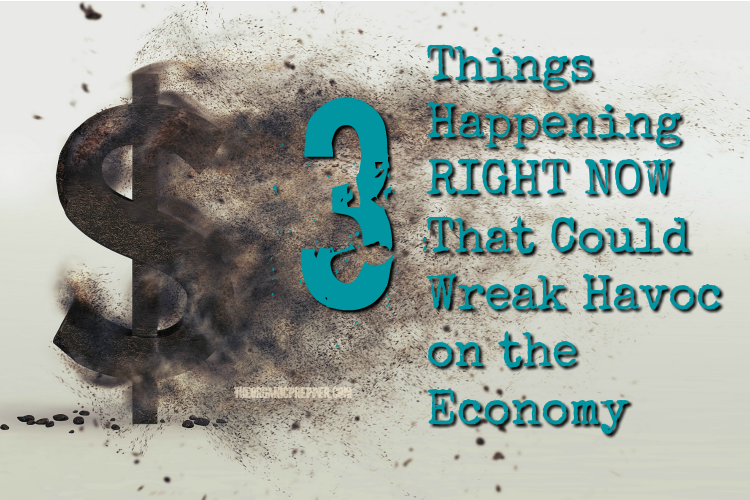 Anyone with a price book will agree that the cost of nearly everything has been steadily going up. Unfortunately, wages are not increasing at the same rate. And to quote Bachman-Turner Overdrive, you ain’t seen nothin’ yet. There are three events happening in the economy right now that could, alone, cause the prices of everything from food to the materials to make replacement parts for your vehicle to skyrocket. But if you combine them all together? We could be facing a perfect storm of economic havoc.

Yesterday, Saudi Arabia announced that they were halting oil exports through a specific lane in the Red Sea due to attacks by “Yemen’s Iran-aligned rebels.” Reuters reported:

Saudi Arabia and arch-foe Iran have been locked in a three-year proxy war in Yemen, which lies on one side of the Bab al-Mandeb strait at the southern mouth of the sea, one of the most important trade routes for oil tankers heading from the Middle East to Europe.

According to the US Energy Information website, the United States imports 904,000 barrels of oil per day from Saudi Arabia.  Prices of fuel would almost certainly go up, which, of course, affects the price of everything that is transported, which is, of course, everything.

Should we suddenly see a shortfall of nearly a million barrels per day, we’d have to get that oil from somewhere else. Most of the other oil we do not produce ourselves comes from Canada, from whom we currently import 120.000-140,000 barrels of oil per day.

Which leads us right to the next financial catastrophe that is looming.

The trade war is getting more heated every day.

As soon as President Trump slapped tariffs on products from China, the EU, and even Canada, he opened the door to our exports also being subject to tariffs. While I think the intentions were good – to bring production back to the United States – the whole thing could turn out to be very, very bad for many Americans. We are going to see the prices of almost everything we buy increasing.

Of course, that’s ALMOST everything, The prices of some things are going to plummet, which may seem good for many of us initially. But for businesses that rely on being able to export their goods, they could face utter devastation.

Take, for example, the farmers. 2.5 BILLION pounds of meat are taking up space in cold storage right now, and the pile just keeps growing as exports slow down due to the trade war.

U.S. consumers’ demand is increasing, but not at levels that are in pace with record production of chickens and hogs. The excess supply is generally exported to Mexico and China—among the biggest foreign buyers of U.S. meat — have both recently slapped tariffs on U.S. hog productsin response to President Trump’s tariffs on steel, aluminum, and other items. Industry officials told the WSJ that U.S. hams, chops and livers have become more expensive in international markets, coupled with a strong dollar weighing on local currencies, which has dramatically reduced demand for U.S. meats.

…Thanks to President Trump, Canada implemented a 10 percent retaliatory tariff on U.S. beef starting July 01, and China increased its tax on U.S. beef to 37 percent on July 06. Mexico, the largest export market for U.S. pork, in June ordered a 10 percent tariff that soared to 20 percent this month. The USDA indicated that overall exports to Mexico are slightly higher than 2017, however, new weekly export data reported for the week of July 05 came in at their lowest levels in more than a year…

…Scott VanderWal, a farmer from South Dakota, said the uncertainty of a trade war disrupts entire supply chains and will be chaotic to rural America:

“We’ve got a decreasing population in our rural areas already. If we lose any more population in the state in these rural areas, not only does it make the young farmers and ranchers leave, or the retiring or about to retire people…it also takes out the people who supply those farmers and ranchers. The feed store, the fertilizer people, those that supply the things that we need to raise the products that we do. It has a tremendously long tail.”

Rapidly increasing meat stockpiles could force prices into a continued downward trend, which could be beneficial for meat-hungry U.S. consumers, along with restaurants and food retailers. While what is good for the consumer is usually bad for businesses, deflationary prices are quickly eroding margins for meat processors. (source)

Weather conditions are dealing another blow to farmers.

Nobody in the Western half of the United States can deny that this summer has been hot, dry, and miserable. The conditions are terrible for farmers and Michael Snyder of the Economic Collapse Blog has made an alarming comparison to the current heat and drought.

Despite all of the other crazy news that is happening all around the world, the top headlines on Drudge on Monday evening were all about the record heatwave that is currently pummeling the Southwest.  Of course it is always hot during the summer, but the strange weather that we have been witnessing in recent months is unlike anything that we have seen since the Dust Bowl days of the 1930s.  At this moment, almost the entire Southwest is in some stage of drought.  Agricultural production has been absolutely devastated, major lakes, rivers and streams are rapidly becoming bone dry, and wild horses are dropping dead because they don’t have any water to drink.  In addition, we are starting to see enormous dust storms strike major cities such as Las Vegas and Phoenix, and the extremely dry conditions have already made this one of the worst years for wildfires in U.S. history.  What we are facing is not “apocalyptic” quite yet, but it will be soon if the rain doesn’t start falling. (source)

If you recall the Dust Bowl era from history class, you may recall that similar weather conditions to the ones we’re seeing now worsened the Great Depression exponentially.

It occurred due to a combination of ill-conceived ideas and drought conditions.

…A series of wet years during the period created further misunderstanding of the region’s ecology and led to the intensive cultivation of increasingly marginal lands that couldn’t be reached by irrigation.

Rising wheat prices in the 1910s and 1920s and increased demand for wheat from Europe during World War I encouraged farmers to plow up millions of acres of native grassland to plant wheat, corn and other row crops. But as the United States entered the Great Depression, wheat prices plummeted. Farmers tore up even more grassland in an attempt to harvest a bumper crop and break even.

Crops began to fail with the onset of drought in 1931, exposing the bare, over-plowed farmland. Without deep-rooted prairie grasses to hold the soil in place, it began to blow away. Eroding soil led to massive dust storms and economic devastation—especially in the Southern Plains. (source)

The dust storms became so bad that they traveled 2000 miles – as far as New York City and Washington DC. On one particularly notable occasion, the Statue of Liberty could not be seen because of the dust. Another dust storm was so bad that it was called Black Sunday, and on that day an estimated three million tons of topsoil were blown off the Great Plains.

Just last month, it’s important to note that commuters in Arizona faced down a mile-high wall of dust that was so bad that the National Weather Service in Phoenix warned of “near-zero visibilities” and “life-threatening travel.” Drought conditions, wildfires, and extreme heat have put a massive strain on the power grid in the Southwest.

These conditions could be troubling for farmers and ranchers.  California produces a tremendous amount of the food grown in the United States and the Midwest and Southwest are studded with farms and ranches. Again, we could be looking at a massive increase in prices as shortages arise due to weather conditions. This is a shortage that would normally be overcome by importing the foods, but wait – since there’s a trade war, you can expect those imports to have an extra 25% cost slapped on them. Look out, economy.

None of these things alone would be enough to collapse the economy, but together, they’re a perfect storm.

Each of these events could affect a sector of the US economy on their own but they wouldn’t be enough to cause an economic catastrophe. But all together? It’s a perfect storm. A worrisome picture is starting to form. An inverted yield curve in interest rates has accurately been a predictor of an economic recession 7 times since the 1960s, and we are currently flatlined.

I know that bloggers have been predicting an economic crisis in America for years now, so much so that some readers scoff.

But it has been edging along this whole time The indicators are all there.

It would be difficult to deny that a perfect storm is brewing.