12 Lessons I Learned When My House Got Struck by Lightning 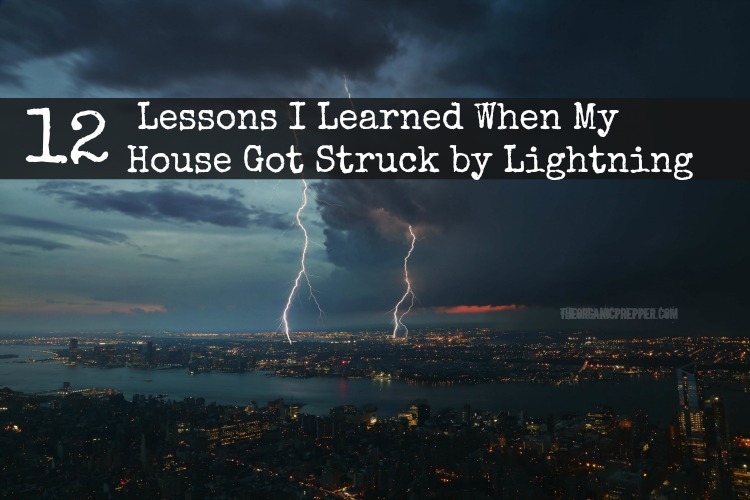 Many times in my life I have been surprised at how things can change in an instant.  Usually that moment is completely unexpected.  Disbelief and shock paralyze, numb, or both, depending on the person.  Sometimes these events rock your world, leaving you rebuilding everything you believed you had.  Sometimes they just devastate a slice of your life, leaving most intact.  And sometimes, though the event is powerful, the effects materialize over time like slow-moving cancer.  No matter the pattern, change is the inevitable result.  For our lightning strike, the pattern was more the latter.

Sitting around the table a friend of mine, her daughter, and my son were talking during yet another storm that was becoming increasingly, and worryingly, more common.  Suddenly, a BOOM—so loud and strong I felt it pulsate through my chest—filled our kitchen and even pushed me slightly backward into my chair.  This was instantly followed by an intense flash of light so bright my eyes were forced to shut.  The lights around us increased their shine beyond anything I thought possible then popped out.  A whining noise moved through the houses speakers with some popping in undetermined locations.

My first thought was “North Korea bombed us!”  My second was “Can’t be.  If it was a nuke I wouldn’t be alive thinking this.”  That took about .001 seconds.  Running through the options in my mind, I realized it was a lightning strike—and it had to be either a direct hit on my house or very close.

As I thought about “what do I do now” it dawned upon me that I had not thought of this possibility in any way whatsoever.   Our security system along with the internet was immediately gone so Googling the answer was not going to happen.  My choice was to do nothing or to try and “common sense” it.  Seemed reasonable to me that a lightning strike to a house could cause a fire so I grabbed my fire extinguishers and walked the interior.  Fortunately, nothing was burning.

Next, I checked the breaker boxes and hallelujah!!!  The surge protectors I had installed hoping for some EMP protection had saved our bacon!  They were lit up like Christmas trees—but the circuits inside seemed to be unharmed.  Our security system needed a reset and the internet had a switch fried.  A simple replace and we were back in business—at least for the moment.  With a change of a few light bulbs and a couple of hours of minor repairs we believed we had defeated the lightning.  Self congratulation was enthusiastically engaged.

We celebrated too soon.

Time proved this premature and events humbled my arrogance.

Over the next several weeks I watched our repairs fail.  I was unable to reliably text, send/receive emails, use the internet, or even place simple calls as pieces of our system would sputter and die.

I learned about a phenomenon I think of as “the Cascade Effect.”  After a lightening strike, it is unusual for everything to just sizzle in an instant.  Often, some parts will be instantly melted—but portions down the line have been impacted and weakened.  Over time, one of those parts will fail and the next one down the line is further strained.  This leads to a slow, cascading death of a system over weeks or more as one portion fails after another.  Further, it is the smaller wires, numerous ones that I didn’t even know existed, that are the most vulnerable and the hardest to protect.

After the ability to communicate from our home was lost, we lost our TV’s, some computers, security system, our thermostats were blown (no fun sweating in high heat without AC) and all power to my greenhouse was lost.  Fuses and GFI outlets were blown or tripped all over the place. I discovered the scorched and burnt remnants of the hit in our detached garage.  The walls were charred up and into the attic space.  Wires were burnt and snapped in half.  How the building didn’t catch fire is a blessing I can only be grateful for.

We didn’t learn of the worst loss until an electrician came to inspect the damage.  Our generator—the main reason I had insisted upon surge protectors—was also damaged.  The “guts” still worked; but, the electrical components—including the manual override switch– were fried.  Despite the crushing disappointment at learning its fate, I am glad I had it checked before the next storm.  At least I was able to have repairs done before needing it again.

The lengthy journey to get it all repaired

Several weeks were devoted to making trips to find WiFi in order to make calls, send emails, and arrange a progression of repairmen.  Estimates needed to be secured, insurance navigated, and my prepping plans updated with new knowledge.

Often we would schedule someone to fix something only to learn they could only do a part of it.  An example was the electrician that could change some fuses—but could not replace the snapped and burnt wiring in the detached garage because the wiring was for our garage door openers.  I have to have a garage door installer come to do that.  He also couldn’t fix the generator because he was not “licensed for that generator.”  I had to google the manufacturer to then call the dealers the website referred me to.

As a blessing or a curse, dependent upon the issue, our insurance prefers to treat entire electrical systems as a “loss” rather than deal with multiple parts over months.  It is a blessing to have systems covered.  And though I am grateful that once repaired there shouldn’t be additional failures, it is difficult to have entire systems replaced.

Many important ones still have not been repaired and will likely take several more weeks.  As I write this now—two months after—we are still waiting to get things fixed and dealing with the lack of service in our home.

But we learned a LOT.

So what lessons were learned?

Here’s what you need to know to prepare for a lightning strike.

Have you ever dealt with a lightning strike?

What kind of damage did your home sustain? I’m curious how you made out. Share your stories in the comments below.