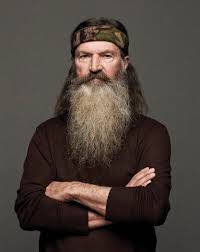 When I first read the rant of Duck Dynasty star Phil Robertson, I was offended by his crassly stated opinion on homosexuality.  I felt it was judgmental and much more crudely stated than was necessary.  If he’d just said that this was against his religion, I, along with many others, would have gotten the point.

But this isn’t a treatise on my personal opinions about gay people and whether they should be allowed to marry and raise families, and for goodness sake, exist without harassment. I honestly don’t care one way or another how a person lives his or her life, as long as they aren’t interfering with my freedom to live my life as I choose.

What I’m writing about is freedom of speech. Phil Robertson, whether I agree with him or not, had every right to express his opinion in whatever language he chose, however unpopular the opinion might be, without fear of repercussion.

Remember when the media was a stalwart champion of freedom of speech?  Yeah, neither do I.  But in theory, they should be, right?

The fact that A&E suspended him for having a different opinion than theirs is wholly unacceptable. Why is a conservative viewpoint considered to be offensive and punishable, when a liberal viewpoint is applauded? Freedom means that both opinions may be expressed, and A&E obviously does not support freedom.

The network released the following statement regarding Robertson’s comments.

“We are extremely disappointed to have read Phil Robertson’s comments in GQ, which are based on his own personal beliefs and are not reflected in the series Duck Dynasty,” the company said in a statement on Wednesday, after declining to comment earlier in the day. “His personal views in no way reflect those of A+E Networks, who have always been strong supporters and champions of the LGBT community. The network has placed Phil under hiatus from filming indefinitely.” (source)

A&E has also supplied Robertson’s response to the furor his comments caused.

“I myself am a product of the 60s; I centered my life around sex, drugs and rock and roll until I hit rock bottom and accepted Jesus as my Savior,” Mr. Robertson said in the statement. “My mission today is to go forth and tell people about why I follow Christ and also what the Bible teaches, and part of that teaching is that women and men are meant to be together. However, I would never treat anyone with disrespect just because they are different from me. We are all created by the Almighty and like Him, I love all of humanity. We would all be better off if we loved God and loved each other.” (source)

So while I disagree with Robertson’s initial comments in GQ, I get to have this personal opinion and voice it however and wherever I want. I should not be subject to punishment for doing so, and neither should Phil Robertson.  While my interpretation of Christianity may be different from Robertson’s, it doesn’t make it any more acceptable for someone to try and censor his opinion.

Anyone who vehemently disagrees with him also has the power to do a few things to express his or her displeasure. They can choose not to watch the show, not to purchase the products with his picture on them, and they can cry it to the rooftops the reason why.  And I will celebrate their right to do that.

As well, I’ll celebrate the right for others to agree with him, to share their own religious beliefs, and to boycott A&E in outrage that the network has trampled on Robertson’s right to freedom of speech.

“I got a problem with that,” Levin said. “I really do. The interview was apparently with GQ magazine and he gave his opinion about a particular sex act, a particular preference and he did it in a fairly crude way. But frankly, not in an X-rated way.”

“[T]here’s no surprise apparently that ‘Duck Dynasty’ is a program that in many respects is laced with faith, right – the Christian faith?” Levin continued. “OK, so that’s known. It’s an incredibly popular program. So why is he fired? I don’t honestly – so why was he fired? ‘I don’t know – what he said, the way he said it.”

“It’s not even something I want to spend a lot of time on other than the First Amendment concerns that I have here and they are concerns that I have,” Levin added. “Oh, I know – it’s not the government cutting him off. But I’m in the free speech business. And again other than the crude manner in which he described this particular sexual preference, and again it wasn’t X-rated. It certainly was not. I really don’t know why he was fired or suspended, but the latest report was fired other than an organized backlash and I’m sick of these organized backlashes. I’m tired of them.” (source)

I’m constantly amazed at how the liberals want everyone to be tolerant of differences but they themselves are the most intolerant people in America.  Whether it is a public relations war on Christians, this strange recent offense they’ve taken with anything relating to Christmas, the wild-eyed panic they stoke about guns,  or refusing to allow others the right to express a politically incorrect opinion, the left seems adamant in only allowing certain opinions and belief systems to be protected.

My dad used to say, “Everybody has the right to be wrong.”  And in a free society, that is absolutely true. Politically correct or not, tolerant or bigoted, religious or secular, you should still have the right in America to hold an opinion and voice it. If we are only free to espouse popular opinions, then we aren’t free at all.