What’s Really Behind All the Plastic Bans Happening Simultaneously? 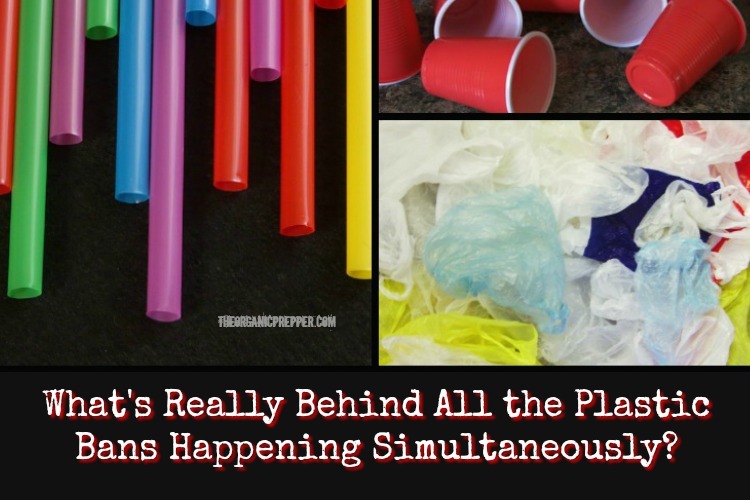 There is now an official War on Plastic.

Why are straws the new “assault weapon” in California? Why is the globe simultaneously banning straws and other single-use plastics? It sounds good, right…just cleaning up the environment for the future of the children.

But could there be a darker, more menacing reason for the sudden explosion of anti-plastic news and simultaneous bans?

Why would the tide suddenly turn against the one thing we were promised was a great new innovation? We’ve been drowning in plastics since birth and in a matter of weeks, every news station is bludgeoning us with what horrible consumers we are to use plastics.

“Green guilt” and penalties are being pushed on consumers in the new wave of eco-insanity. A single-use plastics ban was just approved by the European Parliament.

Have you seen the news? Here are some stats on single use plastic bans.

These states, international cities, and countries have plastic bag bans.

Many of these also impose taxes or fines for either using plastic bags or even for using reusable bags or paper bags. So the consumer (or retailer in some cases) is further penalized. (source)

Note: Pretty much every city in California has a plastic bag ban. And also Washington, D.C.

These cities, states, and countries have banned straws.

These stats are accurate as of June 2018:

These companies have banned straws.

But let’s add to that the sudden explosion of news and studies that finally shows the harmful effects of plastics that were likely known all along.

What we know about the dangers of plastic

Don’t get me wrong – plastics are truly horrible, they always were. But who’s going after the giant chemical companies creating them? Anyway…

My question is this: how did all these media, companies, cities, states and countries around the globe know to perform the same exact legislation and negative reports on plastic at the same exact time?

Just something to think about.

Like a lot of people, I’m a conscientious person with a massive guilt complex. So it’s easy for the barrage of news stories to leave someone shaking in the fetal position about the future of the earth. While the powers-that-shouldn’t-be are causing division both abroad and in the homeland, they are also attempting to meld together a united front from all those smashed-up, divided pieces.

A psychopathic system can gain power from causing division among people but also within the individual himself.

Not only are the powers-that-be expert alchemists who leave no stone unturned, but also they are probably 40 steps ahead of us. They are Pygmalion and we are their clay, or so they think.

What is this great cause that would bring the whole world together in a big globalism blob?

If I had a dollar for every headline I come across every single day about the urgent need to ban consumer products, stop eating so much, don’t eat meat, reduce the population, etc, etc…then I swear I’d never have to work again.

It’s that obnoxious. What’s sad is most of the population internalizes this bullying instead of calling out the agenda. We are either being indoctrinated through comedic entertainment or watching stone faces and pursed lips wag their fingers at us bad humans.

Environmentalism is just a vehicle for the bigger agenda. The anti-plastics crusade is an avenue to pave the way for…

Sure, it sounded like a big conspiracy in years past. But now it’s a reality. Workers in other countries are using microchips to clock-in. How convenient. People in Sweden are lining up to get them implanted.

What better way to usher in more of that than through the demonization of plastics. After all, the consumer is the one being blamed, not the manufacturers. And what do consumers have a lot of? Plastic. Plastic and debt. Purses and wallets today are stuffed to the brim with credit cards, membership cards, and store cards.

It’s only a matter of time before the collective media zeroes in on them. Mark my words. Heck, if straws are the big blight on the earth, then credit cards all the more. Straws are served in restaurants, but credit cards come in the mail when you don’t even want them. Every business wants you on their membership card system.

What do you think of my speculation?

Do you agree that the sudden anti-plastic shift could signal the shoo-in of microchips and a cashless society? Why or why not?