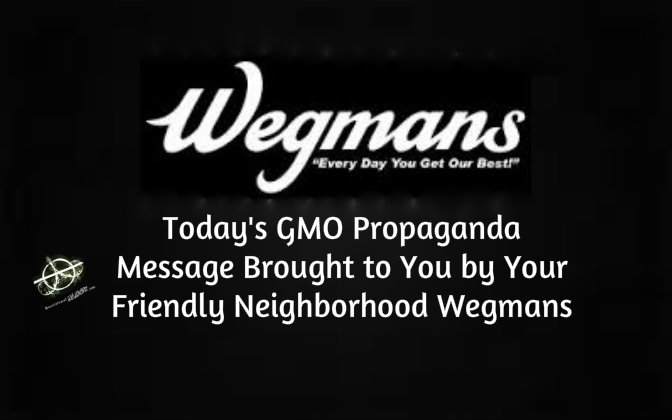 We can all breathe a sigh of relief about that whole GMO thing. Wegmans, vendor of aisle after aisle of artificial food-like substances, has debunked the terrifying myth we were so worried about.  Silly us – this warm, comforting letter from Senior Vice President Mary Ellen Burris puts it all into perspective.

Here’s what assures us about the safety of GMO foods and ingredients currently available (80% of America’s cropland is planted with GMO seed.) All GMO seed companies have consulted with the Food and Drug Administration on each potential product. FDA says that seed companies have satisfactorily completed every additional test that has been asked for, even though this consultation is not required by law. The testing protocols FDA uses are well established by a global collection of scientists from 168 nations.  (source)

(Just to recap, that is the same FDA that says neurotoxins like aspartame and MSG are okay, toxic waste fluoride is actually good for you, uses the corporate headquarters of Biotech and Big Pharma as an employment staffing pool, and sells out to the highest bidder on a regular basis.  We Nutritional Anarchists are not big fans of the FDA – learn more HERE.)

Anyway, poor Mary Ellen got hazed so badly in the comments section she posted a defense of her original letter (emphasis mine):

I have been reading all the comments. Clearly, and no surprise, GMOs are a polarizing topic. It’s why we invested so much time and energy arriving at a point of view, after studying and talking with experts on all sides of the issue. Now, in the interest of transparency, we have shared our conclusions with you. Here are some things I’d like to say and points I want to clarify:

First, in arriving at our position, we put our trust in science. We get it; I get it…trust in government regulators varies widely, and the same is true for major companies who developed the technology and now benefit greatly from genetic engineering. We are not here to defend or debate these points. But, we cannot ignore the large body of science that says GMOs are safe.  (source)

Science?  Huh? The fact is, those noble guardians at the FDA have not required any long term studies of the health effects of GMOs on humans who consume them.

So what science is it that Mary Ellen is referring to?

Would that be the science that gets paid for by the highest bidder and spoonfed to so-called experts? Or the science that gets overturned when researchers from Monsanto get appointed to be in charge of journals who have published horrifying repercussions as a result of consuming GMO corn? Maybe it is the science in America that seems to be diametrically opposite from that in all the countries that are actively banning GMOs.

It’s probably not the studies that told us about gastric lesions or skin conditions from GMO tomatoes and GMO cotton. Or the one about the crazy viral gene in GMOs that was discovered by researchers in Europe.

Excerpted from the article GMOs: Not Even in Moderation: One of the first GMO monstrosities prematurely approved by the FDA was the Flavr Savr tomato, by the company Calgene (now a part of Monsanto).  Scientists added a bit of recombinant fish DNA to slow the spoiling process.  BEFORE the tomato was approved by the FDA, the tomatoes were fed to rats for only 28 days before gastric bleeding and death occurred.  7 of the 40 rats developed bleeding stomachs and 7 more died and the FDA STILL APPROVED the tomatoes for public consumption.

The only reason they were taken off the market is because the flavor and texture were poor.  Had they been tasty, they’d still be on supermarket shelves.

India began commercial planting of  Bt Cotton back in 2002.   Since that time, farm and factory workers began complaining of health concerns.

“All the evidence gathered during the investigation shows that Bt has been causing skin, upper respiratory tract and eye allergy among persons exposed to cotton… The allergy is not restricted to farm labourers involved in picking cotton but has affected labourers involved in loading and unloading Bt from villages to market, those involved in its weighing, labourers working in ginning factories, people who carried out other operations in the field of Bt cotton, or farmers who stored cotton in their homes etc.” (Source)

The issue was not limited to humans.  Sheep that grazed on the crop began to die mysteriously.  25% of the livestock died within a week of being allowed in the fields from what post-mortem analysis called “toxic reaction.”

A secret virus has been discovered in genetically modified food.

The most recent horror to come to light was released in a report by the European Food Safety Authority (EFSA).

According to an explanation on the Natural Society website:

“…Researchers discovered a previously unknown viral gene that is known as ‘Gene VI’. What’s concerning is that not only is the rogue gene found in the most prominent GMO crops and about 63% of GMO traits approved for use (54 out of 86 to be precise), but it can actually disrupt the very biological functions within living organisms. Popular GMO crops such as Roundup-Ready soybeans, NK603, and MON810 corn were found to contain the gene that induces physical mutations.”

How does this potentially effect the consumer?  The report continues to discuss the characteristics of Gene VI.  The gene:

Source: GMOs: Not Even in Moderation

Big Food is perpetuating a monumental hoax. They can’t sell you artificial food-like substances if you become aware that you are simply eating poisonous rations. The  propaganda like this letter from Wegmans should serve as a warning. Do you really want to eat anything that has to be so stringently defended?

If you eat meat, choose options that were not tortured, drugged, and crammed into a cage.