American Austerity: Are the Massive Power Outages Caused by Failure of Green Energy? 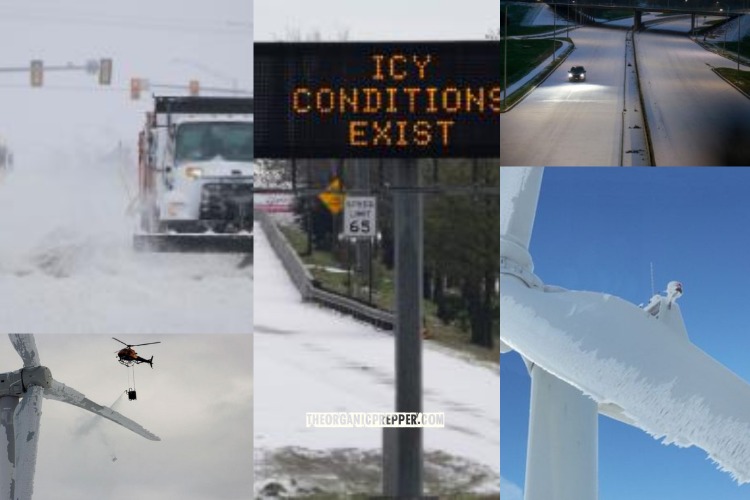 The Great Reset is continuing apace and every sign that austerity is in the cards for the Western world is flashing. The recent winter weather is just one more example of how the formerly richest country in the world is now lowering itself to third world standards and doing so all on the altar of climate change. Of course, that isn’t openly stated. But the growing race from tried and true methods of power in favor of “green” energy is beginning to show the signs of degradation of America’s infrastructure.

A huge swath of the country is experiencing rolling power outages.

For instance, we are now witnessing intentional and planned power outages effecting tens of thousands of residents simply because the weather has gotten colder and power companies need ways to “preserve the power grid.” We saw rolling power outages in California when PG&E didn’t want to be blamed for more wildfires, and now the trend is spreading.

Take a look at what happened in Nebraska when Omaha Public Power District announced planned outages on the morning of February 16. Nebraska Public Power said they were also informed by Southwest Power Pool that they had to implement emergency coordinated interruptions of service also. Many of the rotating outages began with no warning to customers.

“Officials” are claiming the outages are happening because there is not enough power available to keep up with customer demand.

But why is there suddenly not enough supply? According to the CEO of OPPD, Tim Burke, there is a lack of wind. In other words, OPPD is relying on wind power and, even during a winter storm, there is not enough wind to provide power to residents.

This is going to be good advice as America moves closer toward utilizing disproven technologies like wind to provide power to vast swaths of the country.

The same thing happened in Texas where many residents have been without power for 24 hours.

Some of the warmest places in Texas, where rolling power outages are occurring across the chilly state, are inside cars and trucks parked in the driveway of a home without electricity.

Rolling power blackouts were ordered across Texas on Monday as a winter storm and frigid temperatures gripped the state and knocked out service to more than 4 million customers.

The rotating outages could continue until the state’s weather emergency ends, according to the Electric Reliability Council of Texas (ERCOT), a major grid operator that controls about 90% of the state’s electric load.

It’s interesting that the warmest places are cars and trucks. After all, they are powered by evil fossil fuels while the homes they are parked in front of sit dark, due to frozen wind turbines.

Is “going green” the cause of all these outages?

“Frozen wind turbines and limited gas supplies have hampered the ability to generate enough power, according to a statement from ERCOT,” CNN reported.

In the age of virtue signaling and woke capitalism, even the red state of Texas is moving in the direction of California. While Texas has always been known for its huge petroleum and natural gas resources, it is the lack of wind power that is currently bringing the state to its knees. The exact same thing happened in California in 2020 when wind and solar could not keep up with demand during record heat.

But the move toward “green” forms of energy for total supply of power to the population is not merely some foolish attempt at environmental friendliness that will be realized and abandoned in a few years. It is a part of a much bigger agenda.

As researcher and historian Alan Watt stated on his podcast, Cutting Through The Matrix way back  in 2007,

If everyone truly wanted to know why all these bizarre laws have been pushed even locally on them, on your water supply; on your septic supply, your sewage takeaway, your land itself, the land you sit on , your housing standards – all the things which are being pushed now and fines that go along with it for not complying, massive fines on a daily basis – you’ll find it all comes from the United Nations. The United Nations was set up to be a front for a global government run by the same psychopathic families that have brought us to war for centuries with each other.

They want control of everything which gives you independence, including growing your own vegetables ultimately. Agenda 21 gives you the United Nations plan for the habitat areas and there will be two types. There already are in fact. The big cities will be the big slums, very overcrowded slums of the near future, if they get their way, for the bulk of the populace, and very expensive habitat areas with ultra modern houses and solar heating and parks are already  made and they’re for sale for the very, very wealthy, who will ultimately eventually be the bureaucratic classes that serve the world system. This is all coming into being now. It’s happening now.

Daisy Luther has written about the possibility of a time when power, running water, and a return to “normalcy” are only for rich people and it’s looking more and more like that could be the case. It’s likely that most people would prefer to have reliable energy during extreme weather than green energy that only works when the weather is good.

Wind and solar and the rolling blackouts that ensue from them are very much a part of this agenda. Not because they are to replace oil and gas for the good of the environment… but because they are designed not to.

What do you think is the cause of the massive infrastructure failure? Share your thoughts in the comments.