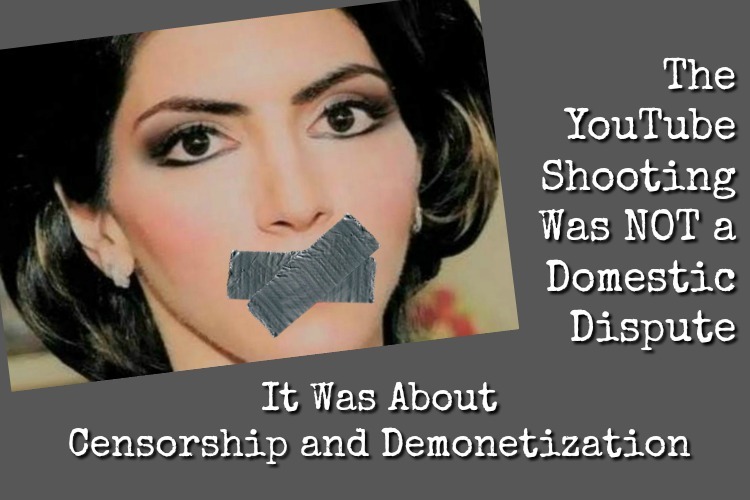 Yesterday, a woman opened fire on the offices of YouTube in San Bruno, California.

She shot 3 people before turning the gun on herself. Initial reports said this was a lover’s quarrel and that one of the victims was her boyfriend. But it turns out that this was incorrect. Other reports stated that the shooter was wearing a headscarf or hijab, sparking fears that this was an Islamic terror attack. Also wrong.

The shooter has been identified as Nasim Aghdam, a woman from San Diego, California. Aghdam was a YouTuber who had recently had her channels demonetized in the company’s crackdown. More on that in a minute.

Her father, Ismail Aghdam, reported her missing on Monday. Police found her sleeping in her car, 470 miles from home and notified her father that she was okay. Mr. Aghdam warned them that “she had spoken of her hatred of YouTube in recent weeks.” Despite that warning, in a story that is beginning to look all too familiar, the next thing that was heard of Ms. Aghdam was when she was found dead by authorities of a self-inflicted wound after opening fire at the YouTube headquarters.

The shooting was the result of what appears to be an unstable woman who was enraged at being censored.

You’ve probably heard that YouTube has been cracking down lately on channels with which they disagree.  Conservative channels, in particular, have noted that their channels have been demonetized – meaning they aren’t allowed to have ads – and more recently, YouTube instituted a ban on gun demo videos.

Nasim Aghdam used the name “Nasime Sabz” online and had more than 10,000 subscribers to her channels. According to

She posted upbeat videos of herself dancing and singing in English, Farsi and Turkish in front of a green screen. She was an animal rights activist and exercise devotee, and talked about going vegan. (source)

It seems that Ms. Aghdam was also a victim of YouTube’s sweeping new policies.  She posted numerous online rants about the sudden demonetization and “filtering” of her numerous channels.

In one online rant, she complained that YouTube censored her content by imposing an age restriction on one of her workout videos because they were too racy. She says the company failed to do the same thing for stars like Miley Cyrus and Nicki Minaj, whose videos, she says, are inappropriate for children.

On her personal webpage, she posted another rant about YouTube saying, “Be aware…there is no free speech in real world and you will be suppressed for telling the truth that is not supported by the system. Videos of targeted users are filtered and merely relegated, so that people can hardly see their videos.” Aghdam also quotes Adolf Hitler, saying, “Make the lie big, make it simple, keep saying it, and eventually they will believe it.”

On her Instagram account she posted a video along with a caption reading, “What do you think of freedom of speech and does it really exist in western countries?” (source)

Zero Hedge reports that she wrote a “manifesto.” here are some excerpts:

“Be aware! Dictatorship exists in all countries but with different tactics! They only care for personal and short-term profits and do anything to reach their goals even by fooling simple-minded people, hiding the truth, manipulating science and everything, putting public mental and physical health at risk, abusing non-human animals, polluting the environment, destroying family values, promoting materialism and sexual degeneration in the name of freedom and turning people into programmed robots!” (source)

Obviously, I’m not endorsing someone shooting up a place of business. The point of this article is the media’s urge to control the narrative…the very thing that triggered this horrific incident in the first place. And no lesson was learned here – many outlets still wanted to make this about a jilted lover gone mad.

But it seems clear to me that this is the direct result of YouTube’s callousness in destroying a person’s business. When they make a decision, they don’t provide any real recourse. Sure, you can send them a message objecting but it is rare that their decision is overturned, and the reply will come as a form letter without any real information.

Obviously, shooting up the place is not the answer. Lawsuits, boycotts, and alternative social media platforms are alternate ways to air our grievances without anyone getting hurt.

Sadly, I’m afraid this won’t be the last tragedy related to our rapidly disappearing freedoms.