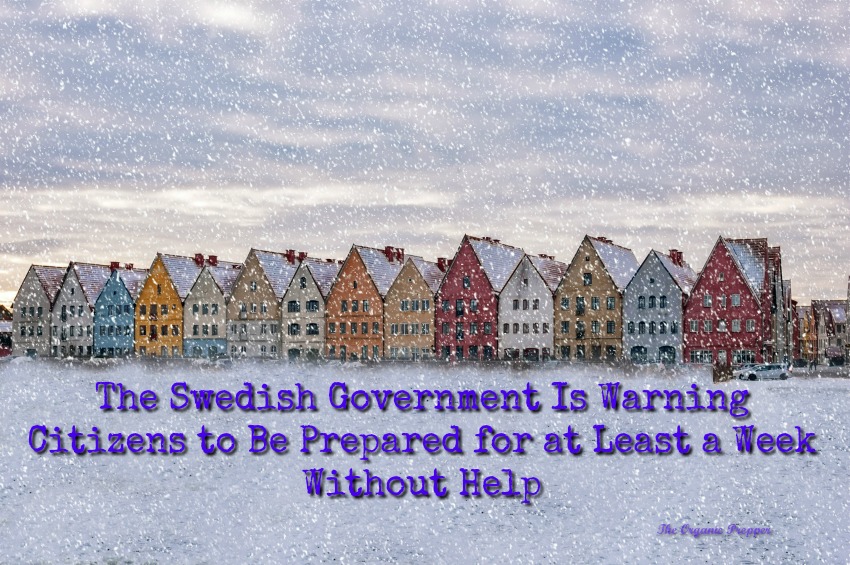 The Swedish government is warning its citizens to be prepared to survive on their own for at least a week,  which is unusual advice for Sweden to dispense. Is there trouble on the horizon?

Shortly before Christmas, the Swedish government quietly published a paper called “Resilience.” Initially, the requirement had been for people to be prepared for 3 days without help, but it seems like that was a baby step. The government itself wants to be prepared for a 3-month long civil emergency and they’re urging citizens to take responsibility, too.

It really makes you wonder what is looming ahead, doesn’t it?

“Because we have the security policy situation we have today, we say that we will make our planning at government level to face a security crisis for three months,” says Eva-Lena Fjällström, Deputy Director of the County Administrative Board in Västerbotten.

Previously, it has been said that citizens will be able to cope for three days in the event of a crisis. Now it’s extended to one week.

“I think it’s important that you can manage yourself. Society has changed and is vulnerable and complex with many dependencies. It can easily be a disturbance so we have to manage ourselves, “says Eva-Lena Fjällström. (source)

The same publication provided video instructions for putting together a “crisis box.”

The Swedish government is also urging young people to get better prepared.

It’s also interesting to note that back in November, an article introducing the idea of preparedness was published and geared toward 18-year-olds. (One must also wonder if this is a gentle nudge toward a potential draft?) It referenced a study done to measure the preparedness levels of the country’s young people.

“In order to strengthen Swedish emergency preparedness, it is important that as many people as possible be prepared to cope with themselves during a crisis. Therefore, it is gratifying that almost nine out of ten 18-year-olds believe that they should take responsibility for themselves and their relatives in a crisis, “says Nils Svartz, Deputy Director General at MSB.

Nevertheless, the survey shows that many young people are not prepared for a crisis. Only one in three has water for three days and even fewer have prepared to communicate and receive important information from the radio if the electricity is lost. (source)

Some Swedes will see this as a different way of life.

The YouTube channel Swedish Homestead (find it here) recently released a video that discussed the national government’s warning for Swedes to be prepared to handle life for at least a week without the help of the government. According to the vlogger, this is not the norm there and the government is “the Big Brother who handles everything.”

There were mentions of “war” and “crisis” but it appears that not many details were given as to the exact nature of the threat.

Many people in Sweden would be incredibly vulnerable in a situation in which they were forced to be independent. Plus, an influx of migrants has to have put a further strain on resources. Nearly 20% of the population has immigrated from another country – 1.7 million people in Sweden are foreign-born in a country with a population of 9.9 million.

Sadly, not very many.

Just like Sweden, many Americans are locked into a system where we are reliant on imported goods, municipal water, and a reliable transportation system to bring us supplies on a regular basis.

While we may not like to think about it, a vast majority of our own population would not be able to be self-sufficient in an emergency that lasted for more than a few days.

The world seems to be becoming increasingly dangerous every year, with threats of nuclear devastation, petro-wars, economic collapse, and religious differences. Our own country has become rigidly divided in a right vs. left paradigm. While none of us personally can fix those issues, we CAN be prepared to take care of our own families, protect our property, and stay informed.

Thank you to Molly for this tip! Other links provided by Toby Cowern of Tread Lightly