The Realities of the S Part of SHTF 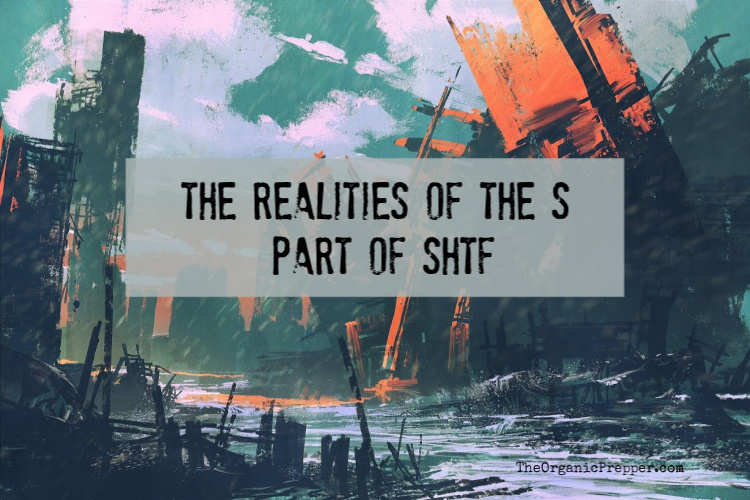 In the preparedness community, the acronym SHTF means, to put it politely, when the Stuff Hits The Fan. It is generally understood to mean chaotic times or extreme hardship caused by severe disasters or apocalyptic events.

For the past couple of decades, high profile mega-disasters have been hot topics for discussion in many internet forums and other social media. Movies and books about a post-apocalyptic world have presented many possibilities that are uncomfortably close to the truth of what it would be like to deal with intense hard times because of things such as pandemics, protracted war, or widespread economic failure.

Most people are not prepared for SHTF scenarios.

Time and time again, historical events have revealed how fragile the fabric of human society is and how easy it is to tear it apart. Today, we are facing a fresh kind of hell that the world has never seen before. The gears of our highly computerized and industrialized society are so tightly linked that a series of bumps in the beltway can destroy our way of life. Unchecked interruptions in the normal flow of things could quickly evolve into the dreaded scenario that is often referred to as TEOTWAWKI (The End Of The World As We Know It).

Most of us know people who are not well prepared for ordinary disasters, much less extraordinary and widespread catastrophic events capable of producing a severe SHTF situation.

Although 60 percent of Americans believe that preparing for disasters is very important to them, only 17 percent claim to be prepared for an emergency. The Department of Homeland Security revealed this disturbing statistic in a survey that was reported on the disaster preparedness website, Ready.gov.

SHTF will bring out the worst in people, and some will be especially dangerous.

Some of us are more or less prepared to deal with the 17 percenters, but unfortunately, there are other kinds of people who are far more dangerous. Prepare to meet them when the SHTF:

Gangs: These experienced predators are highly skilled in getting what they want and will be even more dangerous if they are driven to survive on a basic level for food, water, and medical care. History shows that chaotic times often generate widespread syndicated-style crime. When the SHTF, expect newly formed gangs that will be just as motivated as preexisting gangs.

Preppers, survivalists, existing militia, and snipers: These groups may be formidable adversaries when their supplies run low. They may be more dangerous than criminal gangs because they have a broader skillset than most gang members.

Common thieves: Those who have made their living by stealing from others have honed their techniques to be as efficient as possible. Experienced thieves are experts in searching out and plundering their targets without being detected. If these individuals are motivated by stealing to survive, they will be a force to reckon with. Prepare to stay ahead of them in the game.

Walmartians: Many who are heavily dependent on Walmart and other big box stores may have difficulty surviving without running to a store every few days. When their pantries are bare, expect them to be wild-eyed and desperate. We are all familiar with this group; they are in almost every family and community.

Parents: Unprepared parents will probably be among the most desperately motivated people you may ever encounter. Normal parental instincts kick in when their children’s safety and well-being are threatened. Sometimes this can involve extraordinary strength and drive. There have been news reports of superhuman feats by desperate parents, including mothers who lifted extremely heavy objects such as automobiles to free their trapped children. Imagine how dedicated some parents will be to ensure the survival of their children in the face of disasters…

What will you do if you meet some of these people when the SHTF?

Here are a few tips to use a springboard for generating your own ideas and creative solutions that may work in your situation:

Countermeasures against Walmartians, gangs, preppers, survivalists, militia, and thieves: You may be less of a target if it looks like you have already been robbed or don’t have anything they want. If you must be in the public eye when food is scarce, it might be a good thing if you looked just as malnourished as everyone else. Creative prep items: oversized clothing and perhaps realistic theatrical cosmetics. A very light touch of soot or dirt under the eyes and under the cheekbones can help give the appearance of being ill or deprived.

Even if you look as deprived as everyone else, keep in mind that human trafficking will ramp up to unprecedented levels during lawless times, so you should also take measures to be less of a target as possible. I

Countermeasures against snipers: The occurrence of sniper warfare has led to the evolution of counter-sniper tactics. You can learn about them here.

Countermeasures against desperate parents and seemingly helpless ones:  A friend of mine, TMT Tactical, shared some helpful thoughts on this tricky situation:

You have to ask yourself some simple questions:

(2) What condition is this person in? That is your second red flag. Are they injured and decrepit from a difficult journey or simply dirty and underfed? A loner is not likely to be in very good shape and may have cuts, bruises, and serious injuries. The “bait” may be underfed and dirty but not seriously injured enough to slow down their captors.

I realize that I must harden my home…and my heart. I cannot jeopardize the safety of my household. In a widespread austere situation, there will never be “just one” helpless person. Even if a stranger was truly in need, I know that I could not take care of all the helpless ones that may cross my path without compromising my responsibility to my family.

Another consideration: strangers can bring calamity to your household through diseases or dangerous mental illnesses that may not be obvious at first glance. The combination of no available medicines and no doctors can be a recipe for disaster for your family. By the time you realize something is horribly wrong, it may be too late. Is this the gamble you are willing to risk?

Because of these principles, I have resolved to never open my door to a stranger and endanger my household during extremely hazardous times. But if possible, I would like to find a way to sneak ahead of those who seem to be truly helpless and leave a “care package” along the roadway in such a way that it appears to have been accidentally lost and not deliberately planted.

Can you think of creative ways to reduce confrontations with members of lawless groups during a prolonged and widespread SHTF event?

Of course, I have heard more than a few people say they would respond to any of these threats with bullets. Self-defense is certainly in order but realistically, even the most well-armed can be outnumbered or may eventually run out of ammo during a lengthy event. What then? Now is a good time to brainstorm, explore ideas, and plan ahead.