The Psy-Ops War on Preppers: This Has Become a Two-For-the-Price-of-One Crisis 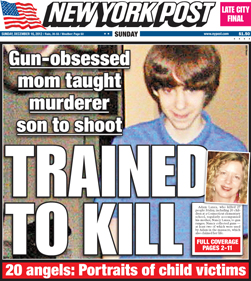 First of all, where is the headquarters of this “Doomsday Preppers Movement” I’ve been reading about?  And where can I sign up? I didn’t realize there was an organized movement, one deserving of capital letters.  Who is the leader of this “movement”?  I’d like to meet him (or her) immediately!

The propaganda machine is not only going after guns in the wake of the terrible tragedy at Sandy Hook Elementary School – this has become a two-for-the-price-of-one crisis, allowing the government and media to yet again, demonize preppers.

Various techniques are used, by any set of groups, and aimed to influence a target audience’s value systems, belief systems, emotions, motives, reasoning, or behavior. It is used to induce confessions or reinforce attitudes and behaviors favorable to the originator’s objectives, and are sometimes combined with black operations or false flag tactics. Target audiences can be governments, organizations, groups, and individuals.

Yesterday the mainstream media began churning out articles about Nancy Lanza, the mother of the shooter, Adam Lanza.  When you read the following quotes, ask yourself: “How many of these comments could describe ME?”

Gee…they say this stuff like it’s a BAD thing.

Nancy Lanza’s description could apply to nearly any prepper.  Preppers have been cast in an ugly light for quite some time.  We are painted as camo-clad survivalists, clenching a knife in our teeth while unloading an automatic weapon into some real or imagined threat.  After our Rambo-esque rampage, we will crouch in the forest by a campfire, shoveling down an MRE while glaring suspiciously into the dark, a large Katana hunting knife close at hand with which to dispatch the next enemy.

The assault on preppers through the media is becoming more and more focused.  Let’s look at some recent examples.

We were described last month by emergency manager Valerie Lucus-MacEwen as “socially selfish” – even though the existence of prepared people makes her supplies go further to help the unprepared.  In an editorial meant for other emergency managers, Ms. Lucus-MacEwen arrogantly asserted, “You might wonder why someone like me, who has been in the business of encouraging disaster preparedness for a very long time, is so critical of people who are doing just that. It’s because they are being socially selfish – preparing themselves and the hell with everyone else.  Instead of spending time and energy making changes that would benefit the larger community, in their very narrow focus of loyalty they are more concerned about themselves.”

The National Geographic program Doomsday Preppers also has had a lot to do with the demonization of preppers – it’s a full-court press propaganda attack against preppers.  The program finds the most outrageous examples of preparedness possible and edits to make them look foolish.  An article on the American Preppers Network explains the modus operandi:

The show severely skews Preppers in an effort that can be summed up as “making good television”.  This is evident not only through viewing the show itself, but through the format they have built the show around.  Some highlights of that format include:

Do you really believe that each of the families on that show only focus on one particular scenario?  No – they are portrayed in a way to marginalize the philosophy of preparedness.  We, as preppers, are a threat to the powers that be.

One participant on the show, David Sarti, learned that his appearance could have serious ramifications.  Mr. Sarti “took one for the team” when, only days after the program aired, however, David Sarti was declared “mentally incompetent”….and his guns were seized.  All of them.  Mr. Sarti, who has no criminal record, is no longer allowed to own guns.  He tells his story here.

Apparently, the constitution no longer applies to those who are categorized as preppers.

The accusation of insanity came after he went to see his cardiologist for some chest pains and shortness of breath.  So far, it sounds sane and rational to me.  The cardiologist, Dr. Andre C. Olivier, whose name and contact information I am delighted to publish, had Mr. Sarti held at the hospital for psychiatric evaluation and broke doctor patient confidentiality by contacting the authorities.

Then it really went to hell on a greased slide.  Mr. Sarti, because of his stay in the psychiatric unit, was then declared “mentally incompetent”.  His very large collection of guns was then stolen removed from his possession.  He is no longer allowed to own weapons.

His crimes?  He was known as a prepper, he was unhappy with the reelection of Barack Obama, and he owned guns. He “openly admitted being a prepper.”

So, why all the vilification? Why are preppers the new “boogeymen”?  Why are we being pigeonholed as people who homeschool our kids and turn them into mass murderers of elementary school students?

Simple…because we don’t NEED help.  We do not require the assistance of the government.  We don’t need to line up for 5 hours to wait for a paltry bottle of water and an MRE after a hurricane strikes. We don’t call 911 and hide in a closet waiting for the police to arrive. 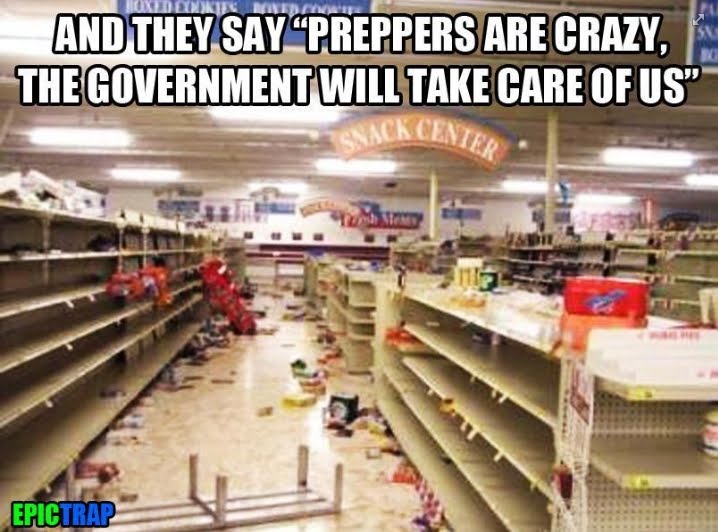 Preppers threaten the very existence of all of the social safety nets that are set up.  We can’t be easily manipulated by the offer of a free flu shot and a grocery store gift card in exchange for our weapons.  We think critically and don’t automatically accept the programming of the mainstream media, whose job it is to provide people with the opinions that they should hold.  We don’t shovel in the HFCS-laden genetically modified crap, otherwise known as “food”, killing our brain cells and dumbing us down into cattle to be easily led to slaughter.

We are the last bastion of independent self-reliant thinkers.  And the powers that be are very afraid of those who think for themselves, rather than regurgitating the media-presented party line.

I don’t know why Adam Lanza went on a rampage and killed 26 people last week.  But I do know that it wasn’t because his mother was a homeschooling prepper who stored up food and taught him to fire a gun at a paper target.