The Ingredients You Should NOT Have in Your Pantry 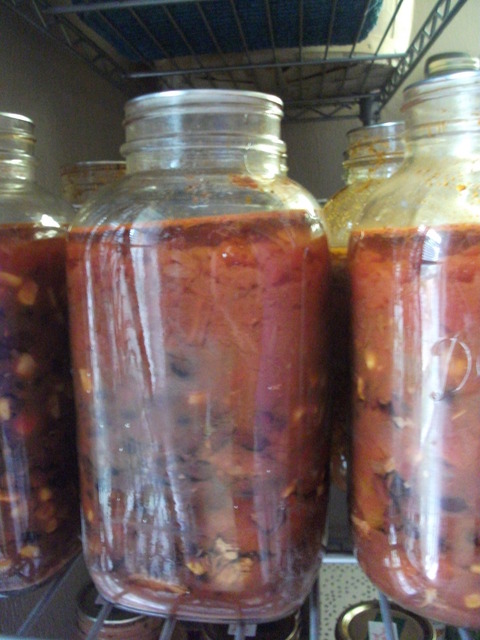 There are lots of lists out there about the foods you DO want in your stockpile, but what about the ones that you DON’T want?

There are certain additives that should be avoided because of their effects on the human body. In a situation where you need to be performing at your physical peak, you need to think about what kind of fuel will help you to do that.

Now, if you’re like me, you may already have some of these items in your food storage.  I’m not suggesting that you throw them out, burn them, blow them up or dump them down a mine shaft.

What I am suggesting is that you limit (or restrict) the amounts of these foods that you consume and consider shopping differently in the future.

The list isn’t comprehensive – there are so many unhealthy and downright harmful additives that are approved by the FDA that it would take a thousand pages to write them all out. And by the time I had that completed, they’d have approved the use of a few hundred more.

Monosodium glutamate, is a flavor enhancer obtained by the fermentation of carbohydrates such as  wheat, corn, beets, sugar cane or molasses.  Because it is a fermentation of natural products the GMO Food and Drug Pushers Administration allows MSG to be considered a “natural flavoring”.

The “food” industry uses MSG to mask lower quality (cheaper) ingredients. Scores of studies confirm the addictive quality of MSG. The brain begins to crave it. (This puts a whole new spin on the ad slogan, “Betcha can’t eat just one!” ) You know the cliche about being hungry 2 hours after  eating Chinese food? That’s because the MSG causes a surge in the production of insulin from the pancreas. The insulin’s objective is to consume sugar. Your blood sugar levels plummet and you feel ravenously hungry – this is NOT a reaction that you want to have when food may be limited or when there is important work to do.

Even more concerning are the long-term effects of MSG consumption.  MSG is classified as an “exitotoxin” – this means that it causes cell death.  This seems to affect the brain most frequently.  Serious health concerns such as seizures, brain cell death, brain damage, allergic reactions, headaches and migraines, strokes, hypoglycemia, and brain tumors surround MSG. The toxin has also been implicated in the development of diseases such as Alzheimer’s and Parkinson’s.

The FDA says it’s okay to have this deadly chemical in the food sold in the United States with the caveat that it has to be labeled as such.  So the wily food manufacturers simply made up an entire pantheon of MSG aliases.  Here are some ingredients to look out for:

In 2011, a commercial was aired by the Corn Refiners Association  in an attempt to assuage the concerns stirred up by the bad press about High Fructose Corn Syrup. The commercial (see the video below) is food industry propaganda at its condescending best.

Since we were encouraged by the commercial to do so, I thought I’d “get the facts” and share them with you.

2. HFCS and cane sugar are NOT biochemically identical or processed the same way by the body.  High fructose corn syrup is an industrial food product and far from “natural”…HFCS …consists of glucose and fructose, not in a 50-50 ratio, but a 55-45 fructose to glucose ratio in an unbound form…Since there is there is no chemical bond between them, no digestion is required, so they are more rapidly absorbed into your blood stream…[This can] lead to increased metabolic disturbances that drive increases in appetite, weight gain, diabetes, heart disease, cancer, dementia and more.

3. HFCS contains contaminants including mercury that are not regulated or measured by the FDA.  An FDA researcher … [received] a big vat of HFCS that was used as part of the study that showed that HFCS often contains toxic levels of mercury because of chlor-alkali products used in its manufacturing. Poisoned sugar is certainly not “natural.”

4. Many independent medical and nutrition experts DO NOT support the use of HFCS in our diet, despite the assertions of the corn industry.  The corn industry’s happy looking websites www.cornsugar.com and www.sweetsurprise.com bolster their position that cane sugar and corn sugar are the same by quoting experts, or should we say mis-quoting …

5. HCFS is almost always a marker of poor-quality, nutrient-poor disease creating industrial food products or “food-like substances.”  The last reason to avoid products that contain HFCS is that they are a marker for poor-quality, nutritionally depleted, processed industrial food full of empty calories and artificial ingredients. If you find “high fructose corn syrup” on the label, you can be sure it is not a whole, real, fresh food full of fiber, vitamins, minerals, phytonutrients and antioxidants.

And my own fact:
6.  Up to 85% of the corn grown in North America is GMO.  If you are trying to avoid toxic GMOs, you have to avoid HFCS. (source)

The last thing on this particular list is a bit more general in an effort towards brevity.  It may sound contraindicative to have a long-term food storage supply without preservatives being used.  Remember, though, that for thousands of years people stored fresh food to be eaten later without all of the chemical additives.  Salt was the main preservative that was added to food.  Aside from that, food was preserved through hard work.  Food items were smoked, cured, canned, dried or cold-cellared.
Let’s think about preservatives for a minute.  What are the foods being preserved from?  The growth of mold and bacteria.  Most preservatives are actually small doses of pesticides.
Think for a moment, about this: If a little pesticide is added to your food in order to make it toxic or inhospitable for bacteria to consume it, then how do you think these pesticides affect the human body?
The amount of preservatives added to one serving of food does not exceed the limits set forth by the FDA as Generally Recognized as Safe (GRAS).  But first, let’s get real?  Who out there actually considers 7 crackers a “serving”?  Secondly, is that going to be the ONLY thing you eat all day that has a preservative in it?  Particularly in a long-term emergency, a person might be eating multiple servings throughout the day of processed items containing preservatives.  How much is too much?  And do we really want to test that question on our own bodies?
Some of these preservatives have other alarming uses that should cause anyone to look askance at the wisdom of consuming them.  Calcium Proprionate has been condemned for use as a pesticide by the Pesticide Action Network but it’s still in nearly every loaf of bread and baked good in the supermarket.  Trisodium Phosphate, a common emulsifier, is the primary ingredient in toilet bowl cleaner, which, according to the label:
MAY DAMAGE GROUT AND CORRODE METAL.
USE GLOVES WHILE HANDLING THIS PRODUCT…….
My personal rule of thumb is this: If an ingredient is listed in the MSDS (workplace hazardous Material Safety Data Sheet) as something that requires the induction of vomiting, I probably shouldn’t eat it or feed it to my family.

The triad of ugliness above is grown from genetically modified seeds more than 85% of the time in North America.  If the above ingredients appear in the list in any form (i.e., corn oil, corn starch) put the item back on the shelf.

How can you avoid these three unhealthy additives in your stockpile?  Make some simple changes to your shopping lists!
Don’t store what you wouldn’t eat today.  Make your stockpiled food as nutritionally functional as possible to fuel you through whatever may come.
Share55
Tweet
Pin35
Share
90 Shares