The Hostile Takeover of Trump, the Economic Crisis, and the Return of HRC 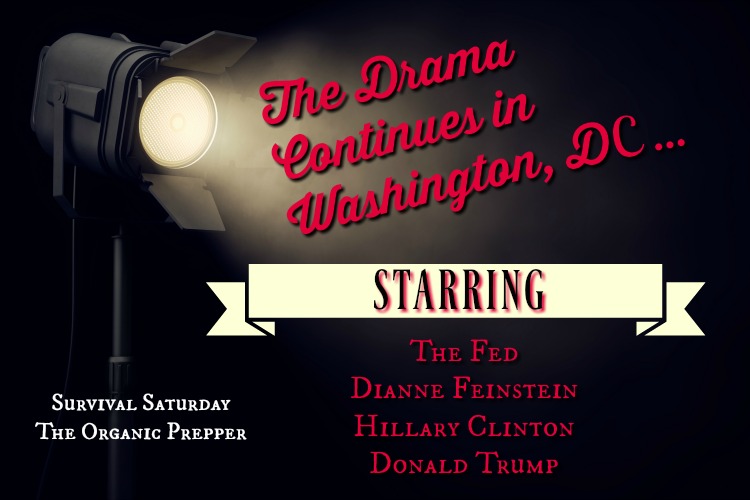 Survival Sunday (busy day yesterday, sorry!) is a round-up of the week’s news and resources for folks who are interested in being prepared.

Sometimes I’d swear House of Cards is actually a documentary. Every week, the soap opera in Washington, DC reaches a new pitch. There is basically no downtime from the manipulations, the end runs, and the drama. The issue is, it’s not a television show. It gets a lot less entertaining when you realize that all of this stuff directly affects us.

This week, we’ll talk about a looming financial catastrophe that is almost upon us, the return of Hillary Clinton, and the constant attempts to unseat Donald Trump from the White House.

How about a recession, a housing crisis, and a stock market crash in the midst of a government shutdown?

Talk about a perfect storm. This week has set us up for economic catastrophe.

If you recall, the Obama administration suspended the debt ceiling until it was no longer Obama’s problem – March 15, 2017. Now we are at an economic crisis point. This quote from Brandon Smith of Alt-Market sums it all up and ties it with a bow.

“The Fed is raising rates into the first year of the Trump presidency leaving equities increasingly open to destabilization. In addition, the government might not be able to continue borrowing from them, or there will be a renewed extension but the costs of borrowing will run much higher. In either case, this month seems to pronounce the beginning of something; a considerable move away from the standard operating procedures that the elites have been using for the past several years.”(source)

People with variable mortgages will be hard hit, and you can expect to see massive foreclosures. People who want to buy or sell homes won’t be able to, and the retail apocalypse will accelerate. Oh – and did I mention that a lot of folks in the know are predicting an impending trade war with China?

If you’re prepping for anything, it should be for an economic crisis the likes of which we have not seen in our lifetimes. Don’t wait for one big, earth-shattering event. We should take notes from the situations we’ve witnessed in Venezuela and Greece. It’s most likely that it will present itself as a series of personal economic crises that, when combined together, will combine to form an ugly situation across our country.

Welp, we haven’t seen the last of Hillary Clinton.

It appears that the losing presidential candidate has finished licking her wounds. Just like the bad guy you think is dead in a horror movie, she’s rising up behind you just once you thought the world was safe again.

During a St. Patrick’s Day speech in Pennsylvania, she announced she is ready to “come out of the woods.” According to a report by The New York Times, she spoke before dinner was served. (That was a questionable decision.) She concluded her speech with:

“I’m like a lot of my friends right now. I have a hard time watching the news, I’ll confess. I am ready to come out of the woods and to help shine a light on what is already happening around kitchen tables, at dinners like this.”

How will she make her return? She’s contemplating a run for the Mayor of New York City, which gives me Nanny Bloomberg, large-soda-pop flashbacks. (When we were on our road trip around the country, we were flatly denied Trenti Double Espresso frappuccinos in New York, despite our dire need for as much caffeine and sugar as we could pump into our bodies at one sitting.)

Sadly, I’m pretty sure she could win hands down in a liberal hotbed like New York, which will, unfortunately, just encourage her in her future political aspirations.

How far would the Left go to get Trump out of office?

Now, I’m not saying all of these things are direct attempts from the Left to get Trump out of office, but the generally accepted air of disrespect and hatred sure isn’t helping. I don’t know if ever a President has been in more peril than Donald Trump.

This week, there were two breaches of White House security.

That’s not all. Everyone knows about the dogged attempts of the media, the Democratic party, and Hollywood to constantly criticize every action the President takes. Much has been written about the possibility of a “Deep State coup.” (Here’s an article about it on Breitbart, but keep in mind, they’re as slanted pro-Trump as the rest of the media is slanted anti-Trump.)

But here is the most surprising thing I’ve seen. Senator Dianne Feinstein (ick) hinted broadly that Trump was about ready to resign after less than 3 months in office. During a town hall-style Q&A, she said:

We have a lot of people looking at this… Technical people… I think he’s going to get himself out… I think sending sons to another country to make a financial deal for his company and then have that covered with government expenses… I think those government expenses should not be allowed.. we are working on a bill that will deal with conflict of interest… it’s difficult…

This article goes into more detail on Feinstein’s hints.

I didn’t like President Obama, but I did resign myself to his presidency. I’m not 100% sold on Trump either, but this behavior is not okay. The rest of the world is looking on and saying, “What the heck has happened to America?”

And I think many of us are asking the same question.

As I mentioned above, it’s time to get prepped for the potential that our economy could be taking some major hits soon.

Stop waiting until you are in the perfect location or until some arbitrary goal is met before you get prepared.  The clock is ticking. I can think of no worse feeling than knowing you should do something, putting it off, and then watching as your family suffers because of your inaction.

Anything to add to Survival Sunday?