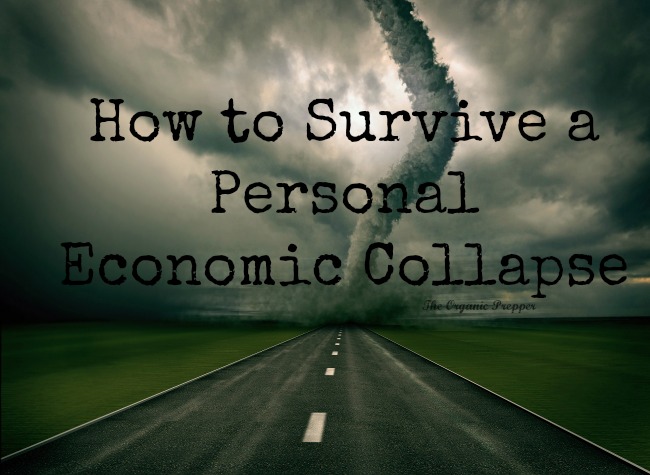 With all that is being written about the economic collapses of nations around the globe, people in America seem to be waiting for some huge event.

But what if it isn’t a huge event like a stock market crash or a currency collapse that you actually need to be concerned about? What if our disaster starts out looking nothing like the economic crises in Argentina, Venezuela or Greece? What if the real financial disaster in the future is more personal?  What, if that financial disaster has already happened?

It’s here and it’s not what anyone expected.

Despite the lack of fanfare in the media, for many North Americans, the collapse is here. In homes across the country, the struggle to survive has already begun. And it isn’t what you think. This isn’t relegated to only lower income neighborhoods.  As an article from a Cincinnati new station stated, “Hunger doesn’t know a zip code.”

For many people who were formerly financially comfortable, the economic collapse has already happened, in the form of a job loss, hours that have been cut back due to Obamacare requirements for employers, an exorbitant medical bill or other crushing debt, or simply an inflation rate that has outstripped your pay increases.  Despite all of the warnings, many people are still going to be absolutely blindsided.

For many families, personal finances have reached a catastrophic level – they are left to make terrible choices:

These are the kind of decisions that people across the nation are grappling with every day. And it’s not the people who you’d expect that are having these problems.

I’m talking about good people, hardworking men and women who have always been employed and paid their bills. A personal financial crisis does not just strike those stereotypical “welfare queens” with the long manicured nails, Gucci knock-off purse, and a grocery cart full of EBT-funded lobster.

Here are the signs of a personal economic collapse.

A personal economic collapse is a little different than the major crises you see all over Europe right now, where huge segments of the population can’t feed their children or stay employed. It is a crisis that just hits your family due to a given set of circumstances.  (In actuality North Americans are on the brink of the kind of collapse that is occurring in Europe, but because of easy access to credit and a buy-now, pay-later society, many of us still have the appearance of prosperity.)

Here are some signs that you may be in the midst of a personal economic collapse:

Times are tough but you can survive this.  This article is written for people who can still hang on and maintain a modicum of their current lifestyle. If your situation is worse than this, here’s an article for those times when no matter how hard you try, you simply can’t pay your bills.

1.) First you have to see exactly where you are.

It’s time for a brutally honest assessment of your finances.  If you use your debit card or credit card for most expenditures, you’ll easily be able to see what you’re spending and bringing in.

Print off your bank account statements for the past 2 months.  On a piece of paper, track where your money is going.  List the following

Don’t say to yourself, “Well, I usually don’t spend $400 on clothing so that isn’t realistic.”  If you spent it, then it’s realistic.  You are averaging together two months, which should account for those less common expenses.  Brutal honesty isn’t fun, but it’s vital for this exercise.

So….what do you see when you look at your piece of paper with your average monthly expenditures for the past two months?  Are there any surprises?  Did you actually realize how much you’ve been spending?   Most of us will immediately see places that we can trim the budget.  Those $1-$5 purchases can really add up.  Reining them in may just allow you to take care of an important need that you thought you could not meet.

It can’t continue like this.  The economy will not withstand it.  Step one is to see where you can cut things out right now from the above expenditures.  Can you reduce your grocery bill?  Slash meals out?  Budget more carefully for gift-giving and school clothes?

If your finances are out of control, the best possible reality check is a stark look at what necessities really are.  It is not necessary to life to have an iPhone, a vehicle in both stalls of your two-car garage, or for your children to all have separate bedrooms.  People in parts of Europe and South America right now will tell you, as they scramble for food, basic over the counter medications like aspirin, and shelter, that necessities are those things essential to life:

Absolutely everything above those basic necessities is a luxury.

So, by this definition, what luxuries do you have?

Reduce your monthly payments by cutting frivolous expenses. Look at every single monthly payment that comes out of your bank account and slash relentlessly.  Consider cutting the following:

We live in a disposable society.  Food comes in throw-away containers.  People replace things instead of repairing them.  If you throw out more than a couple of bags of garbage each week, that’s a very good sign that you may be wasting resources.

Before throwing anything away, pause and think about how it might be able to be reused.

5.) Take control of your food budget.

The price of food is skyrocketing.  Who hasn’t been to the grocery store recently and been shocked at the high price of that cart full of groceries or at the mysterious shrinking food packages that are the same price as yesterday’s larger ones?

6.) Reduce your dependence on utilities.

Energy rates are skyrocketing. As the prices begin to rise, more and more people will be unable to pay their bills and eventually their power will be shut off.  Check your bill each month and as prices increase, use less power. Try some of these ideas to reduce your reliance and drop your bills.

How do you intend to weather the storm?

There are bleak days ahead.  Have you planned for this?  What strategies do you intend to use to weather the financial crisis that is coming for all of us?  What suggestions do you have for families who are undergoing their own economic collapses? Please post questions and ideas in the comments section below.