Radiation, Racism, and the Return of Hillary Clinton 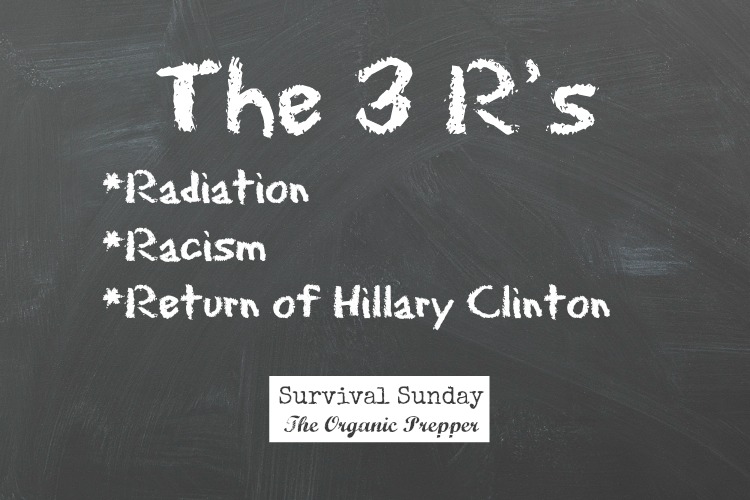 Survival Saturday (or in this case, Survival Sunday) is a round-up of the week’s news and resources for folks who are interested in being prepared.

This week on Survival Sunday, we’ll talk about the three Rs of the week. Radiation, Racism, and the horror-movie style Return of Hillary Rodham Clinton. As well, we’ll talk about preparedness in the face of the climate of incivility affecting America and I’ll share links to some other articles of interest.

What Is Causing the Mysterious Radiation Spike Across Europe?

Iodine-131 is a manmade radioactive material, and it is mysteriously creeping across the European continent toward the UK. Although a spike was initially discovered in Norway in January, authorities only announced it a few days ago after it had spread. (source)

Alarmingly, no one knows where it came from.  Here are a handful of theories:

One of the first theories to crop up, was that perhaps the Russians had conducted some kind of illegal nuclear test. But if that were the case, then the Iodine-131 would be accompanied by other radioactive materials. In any case, it’s widely believed that the radiation really is coming from somewhere in eastern Europe, given that the way it has spread is remarkably similar to the radioactive plum that was emitted from Chernobyl.

The next leading theory is that the radiation isn’t coming from a nation state at all. Since the Iodine-131 was found by itself, someone must have isolated it from other radioactive compounds. The most common reason to isolate this substance is for medical procedures. Iodine-131 is frequently used to treat cancer.

So it’s now theorized that there may have been an accidental leak from a pharmaceutical company in eastern Europe, and that unknown company has failed to report it. Because of how often wind patterns shift however, it’s impossible to determine the precise location of the leak. (source)

The US Air Force has deployed a  WC-135C Constant Phoenix Nuclear explosion “sniffer” to the Mildenhall RAF base in the UK in an attempt to determine the source of the radiation. (source)

Thus far, authorities across Europe have stated that the amounts of radiation aren’t high enough to cause human health concerns. Despite this, it appears to be all hands on deck to determine the origin.

The University of Washington at Tacoma’s Writing Center issued the most ridiculous statement I’ve seen from a higher education facility in a long time. And for those of you who know how I feel about the education system, that’s really saying something.

They have issued a “Statement on Antiracist and Social Justice Work in the Writing Center” that explains how holding students to the standards of proper grammar is racist and unfair. In fact, there is no standard of proper grammar anymore. (Emphasis mine.)

The writing center works from several important beliefs that are crucial to helping writers write and succeed in a racist society. The racist conditions of our society are not simply a matter of bias or prejudice that some people hold. In fact, most racism, for instance, is not accomplished through intent. Racism is the normal condition of things. Racism is pervasive. It is in the systems, structures, rules, languages, expectations, and guidelines that make up our classes, school, and society. For example, linguistic and writing research has shown clearly for many decades that there is no inherent “standard” of English. Language is constantly changing. These two facts make it very difficult to justify placing people in hierarchies or restricting opportunities and privileges because of the way people communicate in particular versions of English.

Because we all live, work, learn, and communicate within such racist systems, the consultants in the writing center assume that a big part of our job is to help students become more critical of these unjust language structures as they affect students’ writing and the judgment of that writing. In particular, being aware of racism as structural offers students the best chances to develop as writers and succeed on their own terms in an inherently racist society.

Furthermore, by acknowledging and critiquing the systemic racism that forms parts of UWT and the languages and literacies expected in it, students and writing center consultants can cultivate a more socially just future for everyone. Just avoiding racism is not enough because it means we are doing nothing to stop racism at large, and it amounts to allowing racism to continue.

So, if I was a person of a race other than Caucasian, I’d be far more offended by someone dropping the standards to “include” me – this makes it sound as though those they are “including” are incapable of learning proper grammar and meeting the standard expectations. Isn’t that, itself, far more insulting and degrading?

The Writing Center says that those who object to this statement have it all wrong. They issued the following response, which seems to be at odds with the original statement.

The Writing Center statement is not about changing the standard for how UW Tacoma teaches commonly accepted English, grammar and composition. UW Tacoma students achieve thorough proficiency in grammar and English expected in higher education and the workplace. Faculty demand a high level of writing proficiency…

…The statement also describes the Center’s commitment to helping students critically understand the broader context of language, including how different dialects are judged in various settings. The Center works to raise awareness that language is part of a larger system than can unintentionally perpetuate racial and social inequities…

…These concepts add to what students are learning about English and writing and help them understand they have choices in how they use language.

Those of us in the workforce all know that the way we express ourselves has a lot to do with how successful we are, particularly if our work requires communication in any way. (And what work doesn’t require at least a modicum of communication?) If you can’t speak or write properly, it can seriously limit your job prospects. Of course, it seems like going to college isn’t really about preparing kids to become successful adults anyway. It’s just about a few more years of intense Marxist brainwashing under the guise of “social justice.”

Anyone who has ever watched a horror movie knows that the moment you turn your back on the presumably dead maniacal killer, the camera zooms in on their twitching fingers.

And so it goes with Hillary Clinton, after her unexpected loss to President Trump.  She’s back and she is calling for “Resistance.”

Sheesh. Just when you thought it was safe to go back in the water.

If you don’t want to hear her grating voice again, here’s part of the transcript:

The challenges we face as a party and a country are real. So, now more than ever, we need to stay engaged in the field and online, reaching out to new voters, young people and everyone who wants a better, stronger and fairer America.

We as Democrats must move forward with courage, confidence and activism, and stay focused on the elections we must win this year and next.

Let resistance plus persistence equal progress for our party and our country.

…Keep fighting and keep the faith… and I’ll be right there with you every step of the way.

It seems clear she is gearing up for another run in 2020. It makes you wonder if the Democrats have learned anything at all from the previous electoral disaster.

This week, I wrote about how to be a peaceful person in a hostile world. While some people welcomed the idea of a break from the stress and animosity of our current political climate, others found it naive and silly. By all means, if you want to go out and do battle via the internet, go for it. I just know that a lot of people are bone-tired of the division and fighting. Maybe a better strategy is to search for common ground where we can and ignore the irrelevant opinions of the people on the opposite side of the political fence who are trying to stir up division and outright violence.

This isn’t to say that we should not defend ourselves should the fight come to us. We have the right and the obligation to protect ourselves and our families. But, the attacks on social media are not life and death matters. I refuse to take part in discussions that aren’t productive and I refuse to feed the anger. But whatever your beliefs on the best way to handle the verbal civil war in America, the choice is yours. That’s the beauty of the First Amendment.

But, the attacks on social media are not life and death matters. I refuse to take part in discussions that aren’t productive and I refuse to feed the anger. I have made the personal decision to take a step back from the anger. I’m focusing on the things that I can control, instead of continuing to tilt at windmills.

One of the things I can control? Getting prepared. And that is probably the most important thing you can be doing right now. It’s going to get worse before it gets better. I’m dedicating my energy to prepping for this and helping others who want to get prepared before it’s too late.

But whatever your beliefs on the best way to handle the verbal civil war in America, the choice is yours. I wouldn’t presume to suggest that everyone should take the peaceful approach because we all have missions and priorities in our lives. And, at least for now, we all have the freedom to express ourselves however we want.

That’s the beauty of the First Amendment.

Each Year, There’s a 1 in 14,000 Chance of Human EXTINCTION…And Most People Don’t Really CARE If Everyone Dies

Making Money in a Post-Collapse World: Here’s What I Learned in Venezuela