This Week on the Washington DC Reality Show 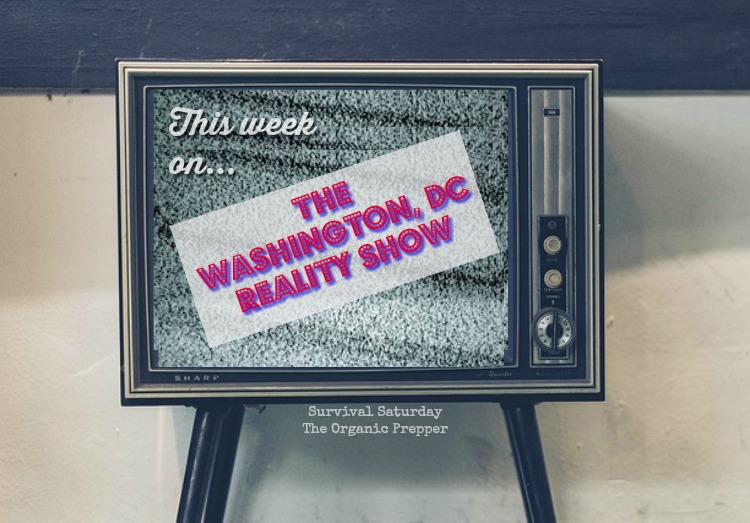 Washington, DC. That place of pomp and dignity, where all of the important things having to do with our nation’s interests are undertaken with the utmost respect for the people who entrusted our elected officials with these sacred duties.

Washington, DC is a cross between a soap opera, a WWF match, and a reality TV show now. It’s a production complete with melodrama, music, miraculous surgeries, villains, and glitzy showmanship. It’s a program that has run its course.

It would be hilarious if it wasn’t all true.

But it is. And all we can do is watch in horror as we’re forced to be extras.

A guy with a brain tumor was the swing vote on the most controversial bill in ages.

First, let’s talk about Senator John McCain. He’s allegedly a conservative Republican but you certainly wouldn’t know it by the way he votes. He puts the “NO” in RINO. (Republican in Name Only)

Let’s go back a few weeks to when he started acting really weird. Here, he is questioning James Comey, the former director of the FBI.

So after that painful incident, it turned out that he had a blood clot in his brain, and had to undergo immediate surgery. Everyone thought, “Ohhhh that’s why he was so weird in the hearing.” The doctors, however, said, no, blood clots don’t make you crazy and that “The senator showed no neurological problems before or after the operation.” (source) (Beg to differ.)

BUT…while the surgeon was in there roto-rooting in McCain’s brain, they made another horrifying discovery. He had a brain tumor and a very aggressive form of brain cancer. (Details.)

They removed the bone behind his eyebrow, hacked out the tumor, put back the bone, and sent him right back to Washington, DC. Like, within days.

So then, we had the vote that everyone has been waiting for, the one to finally get rid of the economic catastrophe (Obamacare) that has destroyed our medical system, and who was the deciding vote? McCain. (source) The guy who just had brain surgery and a giant tumor and brain cancer for which he has not yet been treated. The guy who is supposedly a Republican but sells his constituency down the river every chance he gets.

McCain has gone back to Arizona and his cancer treatment will begin on Monday.

An honorable mention for a decision-maker with impaired judgment must go to Senator Nancy Pelosi, who can’t even recall who the President is and really, honestly, acts as though she could potentially have the beginnings of some form of dementia. Here she is (trying to) talk about Obamacare.

Oh, also, everyone in the Senate except for Rand Paul and Bernie Sanders voted to take away the President’s ability to deal with international matters and sanction the daylights out of Russia, which will most likely provoke that war they’ve all been chomping at the bit to get into. (Details here.)

How in the name of boxed wine are all of these sick, impaired, greedy, deceptive people voted back into Congress again and again and again? What in the heck is wrong with the voters?

Maybe we really do get the government we deserve.

Then we have the new director of White House communications who could cuss the paint off the walls.

Last week, President Trump decided to pour gasoline on the fire that is his communications office in the form of one Anthony Scaramucci. (Am I the only one who can’t hear his name without humming that one part from Bohemian Rhapsody? Will he, in fact, do the fandango?)

Well, thunderbolts and lightning, Scaramucci sure is frightening.

Let’s be genuine here for a moment. Nearly all of us cuss sometimes. I used to work in an automotive shop with a bunch of guys, so you can well imagine that I, on occasion, have let loose with a few four letter words. And so have most of us if we’d care to admit it. But, we know when to hold back. Like when we’re in a professional setting. Or when we are making a public statement. Or representing the President of the United States.

Not so with our new White House communications guy. This representative/spokesperson for the highest office in the land just last week said all of the following to a reporter who was interviewing him, according to a report by Zero Hedge:

After this tirade, Priebus was indeed relieved of his duties and replaced with General John Kelly, who is known as, and I quote, “a beacon of discipline.”

While some discipline is a much-needed ingredient in the White House, I bet he’ll get along really well with Scaramucci and Trump. Who else thinks that the beacon of discipline will wash his hands of the whole business in less than six months?

And if the stories above aren’t enough entertainment value in DC, we have the next round of elections, in which both Kid Rock, a rock star, and The Rock, a former pro wrestler and current movie star, will be taking part.

Well, you know, why the heck not? I’d say the ship of the dignity of Washington, DC has long since sailed, probably even before Bill Clinton had an intern under his desk attending to his…ummm…needs.

While Duane The Rock Johnson sure is likable, I’m not positive he’s actually qualified since he hasn’t even played the President in a movie yet.

On the other hand, if I lived in Michigan, I’d vote for Kid Rock because he actually seems like a fairly reasonable guy who likes guns and ATVs and doublewides. Somehow, this rock star with a private jet is way more in touch with ordinary people than the yahoos populating the halls of congress right now. His potential constituents agree based on his massive lead in the polls.

Then, rubbing his chubby little hands together with evil glee, we have Kim Jong Un, the dictator of North Korea who hates America with the fire of a thousand suns. He’s the Wile E. Coyote to America’s Roadrunner, always plotting and ordering new stuff from ACME to ensure our demise.

His first few missiles totally flopped, but he and his engineers are getting better – frighteningly fast.

And here’s where this comedy of errors turns into something seriously scary.

Earlier this week, I wrote an article about the looming nuclear threat from North Korea. In that article, I wrote that based on what we knew, Hawaii, Alaska, and parts of Canada were at risk, but the US Mainland would be safe until sometime next year.

On Friday, I was proven incorrect with that second supposition, when North Korea achieved a successful test that proved the capacity to reach major American population areas such as LA, Denver, and Chicago while carrying a nuclear warhead. Not even kidding. We are now basically all in the line of nuclear fire. Here are the details.

In the span of just a few days, Kim Jong Un has gone from the bumbling villain to a valid threat.

Just when we thought things couldn’t get any worse…

Remember how we thought the last election was bad?

You know, back when our choices were down to Donald Trump and Hillary Clinton, I mused, “Are these two people really the best our country has to offer? Out of our vast population, are these honestly the epitomes of leadership?”

Then I thought, well, it can’t get worse. Apparently, that was like some huge challenge to the Universe who laughed, cracked its knuckles, and said, “Oh really?”

As you can see, things can get worse. And they have.

I’m pretty sure the rest of the world is tuning in like it’s a shocking yet addictive soap opera. Unfortunately, the weapons that our stars have control of are not going to shoot blanks. The wars they’ll start are not imaginary and the soldiers they’ll send to die are not actors. The pockets they’ll empty are the pockets of real Americans who work hard to build better lives for their families.

We, the American people, are the unwilling extras in a reality show gone wrong, and there appears to be no way off the stage.