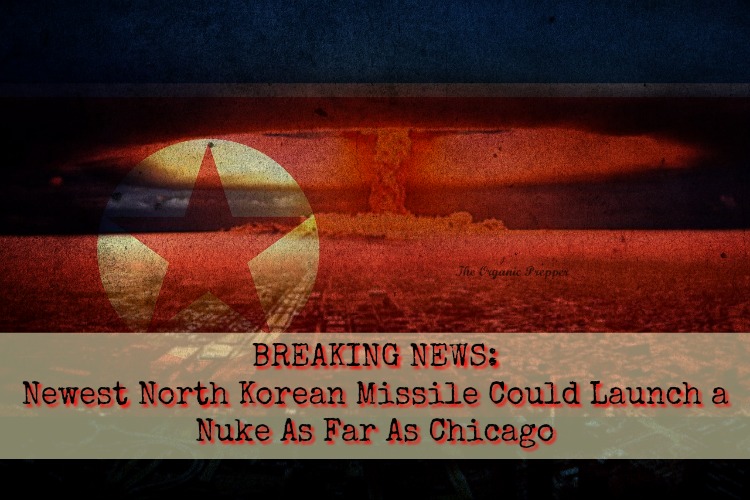 The successful test of a North Korean missile today proved that the country now has the ability to launch an ICBM bearing a nuclear warhead that could reach the middle of the US mainland, including cities like Chicago, Denver, and Los Angeles.

Remember earlier this week when I posted an article stating that North Korea had the capability to reach Alaska and Hawaii and that they might be able to hit the US mainland next year?

Right now, experts don’t believe that North Korea could transport a nuclear warhead to the US mainland, however, Alaska and Hawaii are at risk. Hawaii would be a particularly valuable target, as it is the home of the US Pacific Command.

However, they’re making rapid progress, and experts believe that by sometime in 2018, they’ll have the capability of striking the West Coast, with its large population centers in Seattle, Los Angeles, Portland, and San Francisco. (source)

It turns out, I was wrong.

Today, North Korea tested an intercontinental ballistic missile that reached an altitude of 2,300 miles with a flight time of 47 minutes. And this is very bad news because it means that now, far ahead of the predicted schedule, many major US cities are now potential targets.

According to physicist and co-director of the UCS Global Security Program, David Wright, if those numbers are correct, then the missile flown on a standard trajectory would have a range 10,400 km (6,500 miles), not taking into account the Earth’s rotation. Adding the rotation of the Earth increases the range of missiles fired eastward, depending on their direction. Calculating the range of the missile in the direction of some major US cities gives the approximate results in Table 1.

Table 1 shows that Los Angeles, Denver, and Chicago appear to be well within range of this missile, and that Boston and New York may be just within range. Washington, D.C. may be just out of range.

Wright caveats his calculations saying that “it is important to keep in mind that we do not know the mass of the payload the missile carried on this test. If it was lighter than the actual warhead the missile would carry, the ranges would be shorter than those estimated above.” (source)

With this current provocation, would anyone be surprised if the United States took preemptive action? It would be more surprising if they did nothing.

You CAN survive a nuclear strike.

Please remember that if you aren’t at Ground Zero, a nuclear strike of the size that North Korea could transport to the US is entirely survivable and it isn’t going to turn into some nuclear winter in which your surviving neighbors decide which family to cook for dinner, ala The Road.

Here’s an excerpt from my article, How to Survive a Nuclear Strike. What you do in the first 10 minutes after a strike can save your life.

If you are within 10-20 miles of the blast, the winds will be coming at about 600 miles per hour. This will take down buildings and cause a tremendous amount of pressure. Some experts recommend that you keep your mouth open to try and reduce the pressure on your eardrums.

If you manage to survive that part, you have about 10-15 minutes to evacuate the area before you are exposed to a lethal amount of radioactive fallout. It’s time to get the heck out of Dodge if at all possible. The advantage you will have is that most people will still be trying to figure out what on earth happened. The disadvantage is that roadways may not be clear due to damage from the blast.

Your other option is to immediately get to shelter.

If you take shelter, you should plan to stay there for a minimum of 9 days.

A few other nuclear survival tips:

If you are far enough out to have a bit of time, you can fortify your home to prevent much of the fallout from getting inside.

You’ll then need to have the supplies on hand to wait it out until it is safe to emerge. Learn more about surviving a nuclear strike here.