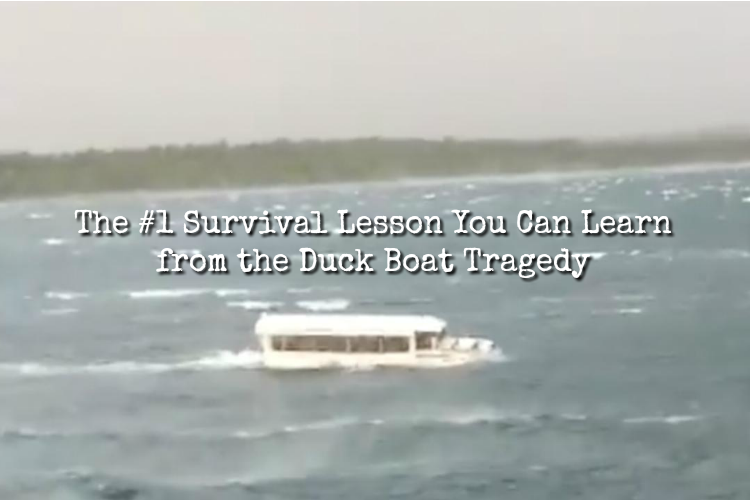 By now, you’ve probably read about the duck boat tragedy in Branson, Missouri.  Whenever I hear about events like this, I analyze the situation to think about what might have altered the outcome for the better. After a tragedy, there is always at least one survival lesson we can learn that may help us if we are ever caught up in a similar incident.

In this case, it’s that you should always trust your own judgment in an emergency instead of the soothing words of people whose jobs depend on you not freaking out.

If you haven’t heard about the incident, here’s what happened. In Branson, a tourist mecca in the Ozarks, there is an outing you can go on called “Ride the Ducks.” The Ducks are amphibious vehicles that can be driven on dry land right into the water where they function as a boat. I’ve personally been on them more than once with my own family.

When you “Ride the Ducks,” they take you on a pleasant tour of the area with spectacular views and a pleasant boat ride on a large lake. For added fun, you get a “quacker,” which is a lanyard holding something that looks like a duck bill. You blow into it when you see another amphibious vehicle and it sounds like the boats are quacking at each other. My daughters still have their quackers (much to my parental dismay.)

Anyway, a few days ago, a sudden storm blew up and the 60 mph winds stirred up the lake. After a struggle, the duck boat capsized, and 17 of the 31 people on board perished in the waters of Table Rock Lake. Tragically, nine of the drowning victims were from a single family.

Seventeen people were killed when a duck boat packed with tourists capsized and sank in high winds on a Missouri lake overnight, Stone County Sheriff Doug Rader announced on social media Friday. The driver of the Ride the Ducks boat died but the captain survived when the boat sank Thursday night in Table Rock Lake in the Branson area, Rader said earlier at a press conference.

Authorities blamed stormy weather for the accident. Winds at the time were blowing as hard as 65 mph, according to the National Weather Service.

Fourteen people survived, including seven who were injured when the boat went down, state police said. Missouri State Highway Patrol Sgt. Jason Pace said those who died ranged in age from 1 to 70 years old. (source)

Those who survived were rescued by an off-duty law enforcement officer, marina workers, the crew of another boat, and an emergency room nurse who happened to be there on vacation.

…Wade and Melissa Johnson, who were visiting from Iowa, were waiting to board the Branson Belle when the duck boat sank. Wade, a member of the Iowa Army National Guard and emergency room nurse, helped members of the showboat’s crew rescue and treat the duck boat’s passengers…

…Pat Cox, owner of a nearby marina, speculated the duck boats were trying to get back to shore as the storm suddenly swooped in. He praised a store manager and about 20 other employees who rushed to the scene with boats and safety equipment…

…Trent Behr and his girlfriend, Allison Lester, were having dinner on a nearby showboat when their boat’s crew began screaming for help. Behr said some of the crew leaped into the water to rescue people. (source)

One woman who survived, Tia Coleman, told CNN about the horrific incident:

Coleman, one of 14 people who survived after the boat went under the water, told CNN affiliate KOLR she was shouting but couldn’t hear or see anyone else. She had been on board with 10 members of her family, according to KOLR.

Many residents and local businesses of Branson have stepped in to help the survivors and the families of the victims.

The survival lesson we can learn

There is one particular survival lesson that we can learn from this tragic event to help us be better prepared to deal with a similar emergency. The most important one is to use your own judgment.

Whenever I have taken my daughters on a boat, particularly when they were young, I always made them wear life jackets whether it was recommended by the crew or not. They didn’t like it and I didn’t care if they liked it. If they were getting on that boat, they were wearing a life jacket and if not, we’d stand there and wave at the people who got to go for a ride. And they knew I meant business, so they reluctantly put the life jackets on, every single time.

I was discussing this incident with a friend of mine and told him that I couldn’t understand why no one grabbed a life jacket when the water became choppy.  I know for a fact that the duck boats are equipped with enough life jackets for every single seat on the vessel.

Unfortunately, according to survivor Tia Coleman, the captain told the folks on the boat that they were unnecessary.

“My husband would want me to say this. He would want the world to know that on this boat we were on, the captain had told us, ‘Don’t worry about grabbing the life jackets—you won’t need them.’ So nobody grabbed them as we listened to the captain as he told us to stay seated,” Tia Coleman told local television station FOX59 on Friday. (source)

It’s most likely that many lives could have been saved if the captain had instead advised people to don the life jackets. Since he survived, I imagine he is playing the scene over and over in his head and wishing he had given different advice. The guilt he must feel would be tremendous and my heart goes out to him.

But the survival lesson is: if you want to survive a disaster, you can’t always rely on the advice of others. If your gut tells you to grab the safety equipment, to evacuate the area, or to take an action for your own protection, LISTEN to it.

Things also might have been different if people had ignored the captain’s advice and grabbed life jackets anyway.

And for heaven’s sake, if you aren’t a strong swimmer, you should always have a flotation device at hand if you are going out on the water.

My deepest sympathy goes out to the victims, their families, and the witnesses of this tragedy.