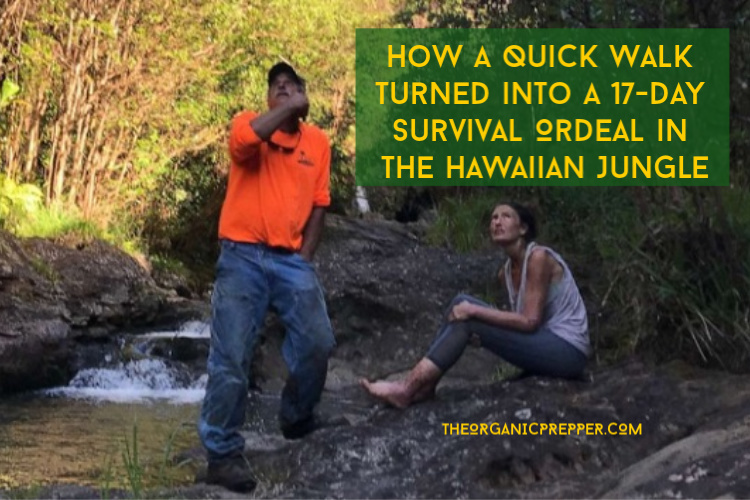 More than 2 weeks ago, the news was abuzz about Amanda Eller, a 37-year-old physical therapist/yoga instructor who took a walk in a Maui forest and never came back to where her car was parked. Theories abounded about Amanda because she’d left her water bottle, cellphone, and wallet in her car. People wondered whether she’d been kidnapped or murdered.

The official search was called off after only 72 hours, leaving the hunt for Amanda in the hands of hundreds of volunteers who combed the forest. As well, people all over the world made donations to help fund the search.

The Makawao Forest Reserve is a 2000 acre area on the north side of Maui that is surrounded by even more thousands of acres of dense forest, steep ravines, lava rocks, and vegetation so thick that it often must be hacked with machetes to get through it.

There’s a lot we can learn from the survival stories of other people and Amanda’s story also has many lessons. While I’ll point out a few mistakes, keep in mind that nearly every survival story begins with something going sideways. Amanda survived a situation many people could not, and did so barefoot and with a fractured leg. Amanda did a few things wrong but did a LOT of things right.

Before you head out on your next hiking trip, read Amanda’s story and then brush up on these tips for safe hiking.

How did she get lost in the first place?

Amanda told reporters she didn’t take her water or phone because she was planning only a quick walk. One thing Selco drummed into us during our course is that you don’t even walk across the street without a layer one that contains at the least some water purification tablets, a lighter, a whistle, a trauma bandage, and a knife.

According to news reports, Amanda intended to walk a quick three-mile trail. But when she stopped to rest, she got turned around and that was when things went wrong.

‘I wanted to go back the way I’d come, but my gut was leading me another way — and I have a very strong gut instinct.

‘So, I said, my car is this way and I’m just going to keep going until I reach it.

‘I heard this voice that said, “If you want to live, keep going”.

‘And as soon as I would doubt my intuition and try to go another way than where it was telling me, something would stop me, a branch would fall on me, I’d stub my toe, or I’d trip. So I was like, “O.K., there is only one way to go”.

‘The whole time I was going deeper into the jungle, even though I thought I was going back where I came from. (source)

Unfortunately, her instincts led her astray. Anyone who regularly walks in wild areas should learn the basics of navigation using the sun, or better yet a compass,  (You can get watches that have compasses built in. Be sure to calibrate your compass with a known accurate compass.)

Amanda told reporters she hiked for about 14 hours the first day hoping to get back to her car. She was only wearing a tank top and capri pants. Temperatures in that area drop to about 60 degrees at night.

By day 3, she stopped looking for the trailhead and began searching for water. Generally, when you’re lost, water should be a resource you look for sooner due to the immediate risk of dehydration. This was the same day she fell off a cliff and injured her leg, fracturing it and tearing her meniscus. The following day, she found water indeed when a flash flood swept her shoes away. Now, injured and barefoot, she was not moving as fast, and she was crawling instead of walking, but the entire time, she was moving deeper into the jungle. From her hospital bed, she said, “I heard this voice that said, ‘If you want to live, keep going.”

She covered herself with ferns and leaves at night. She slept in the mud, and another night in the den of a wild boar. (It’s interesting to note that boars are the most dangerous wildlife on the island. Aside from boars, there aren’t any large predators.)

She ate wild strawberry guavas, berries, and moths for 17 days. Fortunately, she had learned enough about the local flora to know what she could safely eat. She stayed by a stream, from which she drank water.

But she was beginning to lose hope. “I was getting so skinny that I was really starting to doubt if I could survive,”

Even though officials gave up on the search after 72 hours, the locals did not. Volunteer search parties combed the area near where Amanda’s car had been found.

Meanwhile, an army of volunteers turned seemingly every stone looking for her. They rappelled into ravines, searched caves, free-dove into pools and navigated fast-moving streams looking for Ms. Eller. Others killed aggressive wild boars and checked their intestines for human remains. At least one volunteer was attacked by a boar. (source)

A friend of mine in Hawaii joined the search and told me that the volunteers were searching miles and miles on foot, day and night, despite the lack of official support. Finally, by sheer good fortune, Amanda was out in the open when a search helicopter flew over.

Rescue workers had been combing the thickly wooded 1.5-mile radius around Ms. Eller’s car. But on a whim, the searchers in the helicopter on Friday decided to go farther, about seven miles from the central search area by air — the equivalent of 30 miles walking in such rough conditions, said Javier Canetellops, a search coordinator who was in the helicopter…

…On Day 17, Ms. Eller was near a stream searching for “some plant to eat for dinner and some place to sleep that wasn’t directly in the mud” when she saw a helicopter. She said she had seen and heard multiple helicopters fly above her during her ordeal, according to her friend Ms. York, but none had spotted her. This one did.

“I looked up and they were right on top of me,” she said. “I was like, ‘Oh my God,’ and I just broke down and started bawling.” (source)

Here’s the footage of Amanda’s rescue.

Rescuers say that Amanda was found in an extremely treacherous area, deep in H’aiku’ several miles above Twin Falls. She was immediately airlifted to a hospital and is expected to make a full recovery. In the following video, a rescuer described finding Amanda.

Amanda had a lot to say about the volunteers who searched for her and about her “spiritual journey” while she was lost. Here’s her statement from the hospital.

And finally, this is a press conference held at the hospital updating us on Amanda’s condition.

Amanda walked with a fractured tibia, severe sunburns, infected wounds in her lower extremities, and a torn meniscus. Miraculously, her doctor said she was well-hydrated when she was rescued and that she looks great. She did not contract any issues from drinking water from the stream. Physicians expect a full recovery.

Her doctor chalks a great deal of her survival up to the fact that she was very healthy and well-nourished before her ordeal.

When I heard about this story and a week had gone past, I certainly didn’t expect to hear a happy ending. In nearly every survival situation, mistakes are made. Amanda’s will to live helped propel her through what must have been a terrifying two and a half weeks.

Could you survive 17 days in the wilderness? What do you think of Amanda’s story?