South Korean Preppers: Government Instructs Citizens How to Get Ready for War 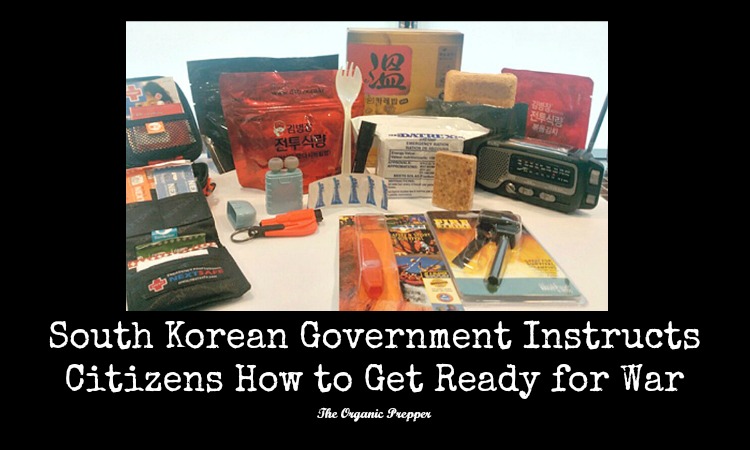 The government of South Korea is making every effort to turn its citizens into a country of survivalists. With the ever-increasing threats from the North, South Korean preppers are becoming mainstream, instead of a quirky fringe element.

Just last night, Kim Jong Un fired yet another ballistic missile over Japan, spitting in the face of international pressure. It seems difficult to imagine that he’s going to just eat a Snickers and chill out. So wisely, his closest neighbors are preparing for the worst.

The South Korean President isn’t taking this lying down. “In case North Korea undertakes provocations against us or our ally, we have the power to destroy (the North) beyond recovery.” (source)This threat most likely will not please the Dear Leader of North Korea, so it’s probably safe to predict even greater hostilities on the horizon.

South Koreans have been warned to get ready.

The South Korean Ministry of Public Administration and Security has issued guidelines for a variety of attacks to their citizens due to the ever-increasing risk of an attack by North Korea. Here are some brief quotes from the Ministry. Go here to read the whole thing.

Despite living under constant threat of war, South Koreans rarely possess emergency supply kits at home or know how to assemble one. This may be an opportunity to put one together, since it is helpful not just in war, but in other emergencies, such as an earthquake or flood.

According to the Security Ministry, the kit should at least include these items: necessary medications, a battery-powered radio with extra batteries, a flashlight, candles, gas masks, as well as food and water for at least three days…

North Korea often threatens to turn Seoul into a “sea of fire.” South Koreans, so used to the regime’s fiery rhetoric, don’t even blink at such threats. To be sure, though, Pyongyang has thousands of conventional artillery lined up toward Seoul, ready to fire at a moment’s notice.

In such an attack, the first step is to relocate to fallout shelters. Make sure you know where to head when at home, work, school or places where you regularly spend time.

There are around 24,000 shelters nationwide in public buildings, subway stations and underground parking spaces…

3. If it involves chemical weapons?

When a chemical weapons attack occurs, a person must immediately cover his or her face with a gas mask or other cloth, and seek safety in higher places.

Animal corpses are one of the first signs of such attacks. Usually corpses of birds and fish will be spotted on ground and in the water.

High ground nearby such as a rooftop is the most convenient place to seek refuge when a deadly chemical agent is unleashed. Most chemical gases, such as sarin, are denser than air, which means they will sink to the ground.

The wind will carry toxic materials, so an escapee must head toward the opposite direction of the blowing wind…

4. To survive a nuclear blast?

A nuclear bomb can only delivered by a missile and South Korean and US militaries here will be able to detect any preparation for a launch. So there will be a loud alarm going on to alert people on the imminent missile attack, whether it is a nuclear attack or not.

Even in a nuclear attack, there is a chance to survive if you manage to go at least 15 meters below ground. Find subway stations. If there is no underground facility nearby, hide inside lead or concrete structures.  (source)

Citizens are taking the advice seriously.

An article published in the South Korean Times states, “The number of doomsday pessimists is rapidly growing here, as is shown from the number of relevant YouTube videos and their views.”

The article goes on to describe a video by a popular female comedian that teaches watchers how to create a bug-out bag. But that’s not all. South Korean preppers are becoming mainstream.

When typing “survival bag” in Korean on the video-streaming platform, more than 21,000 relevant videos, mostly uploaded in recent months, are found. This shows that the series of military provocations by Pyongyang in recent months has scared more and more people in South Korea.

“The three are considered basic items in the case of war,” he said. “While combat rations have steady popularity for the whole year, gas masks are rarely sold unless the North launches a missile or conducts a nuclear test. The pattern has been almost the same for many years.”

The ministry states each household should obtain processed food provisions for 15 to 30 days to prepare for possible war. It also urges households to pile up enough water, and blankets and clothes that can keep people warm. Other recommended accessories in time of war include a portable battery, gloves and personal hygiene products such as toothbrushes and towels, according to the ministry.(source)

It’s nice to see that South Koreans are heeding the warnings. Of course, any person living that close to the DMZ would be insane not to be taking action to prepare themselves.

When the warnings start, it’s often too late.

The lesson that we can take from this is that being prepared far in advance of a collapse is the wisest course of action. If you stock up on emergency food, water, and other vital supplies before the crowd, you’ll do so at better prices with better options. As far as nuclear preparedness is concerned, there are a lot of things you can do to make this survivable. This inexpensive Nuclear Preparedness class contains hours of recorded interviews with nuclear experts, and this article has good advice as well.

Hopefully, South Korean preppers will be able to access the supplies they need at prices they can afford before North Korea speeds up the timeline. Once the attacks are incoming, it will be too late.