Should Your Kids Know How to Bug Out…from School? 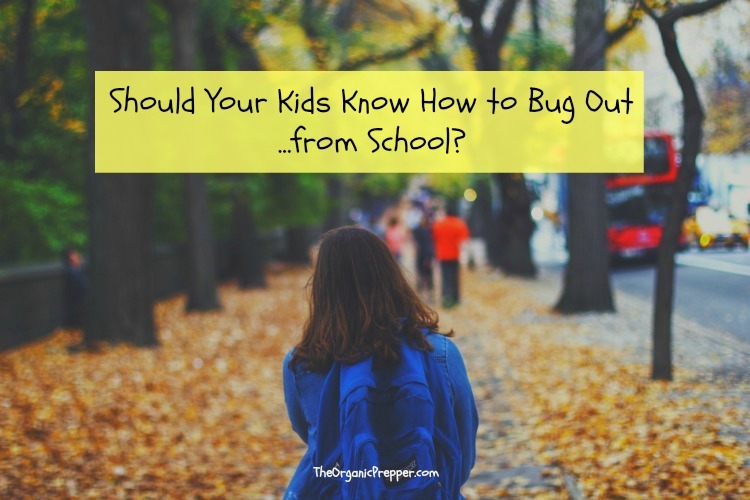 There are many alarming trends throughout the American public school system, and two of the most unsettling relate to lockdown drills and active shooter drills:

Active shooter drills have become more common as school gun massacre after massacre has made headlines. The drills give teachers and students a blueprint to follow during emergencies, which may save lives. Forty-two states have laws requiring some sort of emergency or safety drills in schools, many of which are designed to protect against active shooters, according to the nonprofit Education Commission of the States.

But there is hardly any research on the drills’ effectiveness, and while there are some federal recommendations, there is no standard template for schools to follow in terms of how to do them, how often to conduct them and how to explain them to students of different ages. (source)

Recent reports say that sales of bulletproof backpacks are on the rise as well.

Some schools are conducting drills that look a lot like bugging out.

But a quick drill with guns pointed at children is not even the worst of the drills being performed. Another type of drill began occurring in 2012. These are called “evacuation drills” or “relocation drills” and the kids are put on a bus and taken to a location that is not disclosed to parents. Michael Snyder wrote:

All over the United States, school children are being taken out of their classrooms, put on buses and sent to “alternate locations” during terror drills…In the years since 9/11 and the Columbine school shootings, there has been a concerted effort to make school emergency drills much more “realistic” and much more intense.    Unfortunately, the fact that many of these drills are deeply traumatizing many children does not seem to bother too many people.  Do we really need to have “active shooter” drills where men point guns at our kids and fire blanks at them?  Do we really need to have “relocation drills” where kids are rapidly herded on to buses and told that they must surrender their cell phones because they will not be allowed to call anyone? (source)

During these drills, kids are not allowed to phone their parents and parents are not even allowed to know where their children are in many cases. In some incidences during which the school forewarns parents about the drill, the parents are told that they cannot pick up their children “for any reason” during the drill. Many schools now boast of having supplies to keep children at the school for 48 hours in the event of an “emergency” during which time the children will not be released to their parents.

And it gets even worse. In the name of predictive programming, do you recall a “drill” during which the police took over a school and practiced fighting “angry parents”? I’ve been plenty annoyed at different schools my daughter has attended, but in no way have I been compelled to attack the school, requiring SWAT teams to defend it against me and my band of likewise irate moms.

In fact, there’s only one scenario I can imagine in which parents would storm the school to take back their children. Mac Slavo of SHTFplan wrote about it:

Let’s consider the circumstances that would have to occur for not one, but two or more parents to lay armed siege to a school.

There’s only one real scenario that comes to mind, and you’d more than likely have to be a prepper or conspiracy theorist to even contemplate the possibility.

The schools which our kids attend have “shelter-in-place” emergency procedures that would be enacted in the event of an emergency such as a nuclear, chemical or biological attack. During these emergencies schools are to be locked down with no unofficial access into the buildings until the all-clear has been given. It’s unclear based on district procedures just what the shelter-in-place order means and what steps parents would need to take to get their kids out of school – or whether they could even take their kids out of school based on the emergency.

But basically, it boils down to this: If there is a widespread emergency, and a school locks down and refuses parental access to children, then and only then could we envision a scenario where parents might take it upon themselves to evacuate their children by force.

The ‘event’ in question would likely need to be mass scale, or perceived as mass scale, in order for a parent to be so adamant about getting their child out of the school that they would take to armed violence to get them out.

Is this what police are training for?

Someone, somewhere obviously thinks there is a legitimate reason for this type of training simulation. (source)

So when you put all of this together, it’s easy to see the future. The picture this is painting is that one day, a unilateral decision could be made to put our children on a bus, take them to an undisclosed location, and keep them.

Should you teach your child to escape?

Maybe it’s time to teach your child how to bug out from school.

By no means am I suggesting that this is a legitimate course of action for every child. Some kids are too young or too prone to panic and poor judgment to safely bug out. Some environments are too dangerous for a young person to take off on his or her own. Parents have to consider the skills and mindset of their kids before making plans like this. It can definitely be risky, and you have to compare it to the alternative of having your child herded along.

I have a huge amount of faith in my child. So much so that we performed some of our own drills back when she was still in school. She was always a lot more “aware” of events going on in the world than most of her peers because we discussed things like government encroachment and tyranny on a regular basis. She knew that she was not to get on a bus without my prior knowledge and consent.

It’s very important to be able to teach your kid how to deal with emergencies without scaring them. Here’s some advice.

If, out of the blue, the teachers just tell students to get on a bus, and there is no compelling reason for them to be doing so, it might be time for your child to use his or her own judgment on whether boarding that conveyance is actually a good idea.

If you feel that a school bug-out plan is a good idea for your child, here are a few things to consider:

It is also important that your child has the proper gear to take off on foot, as well as the ability to use all of it. It’s important to practice things like filtering water in order for a young person to feel confident doing so.

Most of the other gear that you’d prefer your child to have is going to be deemed “dangerous” by the school. Things like multi-tools, matches or lighters, or self-defense items are frowned upon and can result in anything from suspension by a “zero-tolerance” school system that seems unable to differentiate between a tool and a threat, to felony charges by the overzealous “justice system.” These are things you must take into consideration when choosing items for the emergency kit, and you have to weigh the pros against the cons.

Will this work for you?

This is not a plan that will work for every family. Only you can judge whether or not your child or teen can keep a cool enough head to execute a similar plan and use their own judgment in a surprise situation. Only you can assess the immediate environment and decide if it is safer for your student to set out on their own or to go with the staff from the school.

Do any of you have a similar plan for your kids? Please share your suggestions in the comments below.

NOTE: This is not a debate about whether children should be educated at home or via the public school system. This is about a specific situation that affects many families in America who have made the decision to send their children to school based on their own personal circumstances or the availability of special programs.