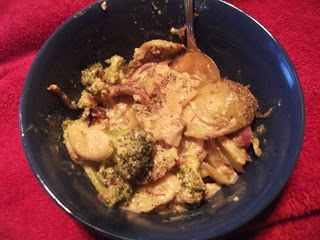 I’d like to tell you about the warm, homey smells coming from my kitchen all day as things baked and simmered while I gave a little Martha Stewart smile, inhaling deeply from the pot on the stove.

If I did, however, I’d be lying through my teeth.

Day 1 did not turn out quite how I had planned.

First of all, with last night being Halloween, when we got home from trudging through the cold rain for 2 hours, the last thing I felt like doing was taking my shivering self into the kitchen to bake a loaf of bread.  So I did nothing whatsoever last night to provide for food for the next day.

Then, this morning, I overslept – blame it on the sugar hangover from our Halloween candy binge. I cobbled together a lunch for Rosie out of leftovers that did not break the “from scratch” rules.  I had to revise the rules to allow her ONE treat from the Halloween goodies in her lunch per day.  I didn’t really think about a 12 year old with a pillowcase full of candy and chips when I planned this challenge.  Lunch consisted of: a thick slice of leftover chicken breast, applesauce that I had canned previously, a bag of chips from the goodie bag and some homemade chocolate chip cookies.  Not the best but not the worst although I’m sure she would have preferred that the chicken be between a couple of slabs of bread instead of in a Ziploc bag.  She lived. 🙂

After my late start, I hopped on the computer and worked for 3 hours straight, playing catch-up.  At that point, I was ravenous.  I thought longingly of toast with all-natural peanut butter but, ummm….someone didn’t make any bread.  My mouth watered at the idea of cheese and crackers but….no one made crackers either! As my hunger increased exponentially, I settled on a less than satisfying (but 5 minute prep) meal of scrambled eggs with assorted veggies and an apple. 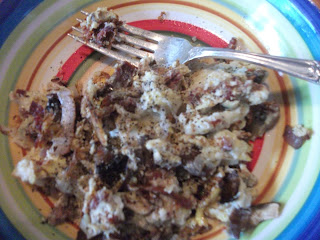 Mid afternoon I had a break and ate the last of the homemade cookies.
Supper was another strange affair. Rosie had a dentist’s appointment (no cavities – hooray!) at 4:30, so I prepped dinner before we left and placed it in the oven (not turned on).  My kitchen stays quite cool if the oven isn’t on, so I felt safe letting the ingredients come to room temperature for the hour or so that we were gone.  The CDC might not approve but we seem to have survived with no ill effects.
I made a casserole that was kind of a scalloped potato kind of dish. It contained  thinly sliced potatoes, onions, thyme, garlic and broccoli.  I opened a jar of ham that I had canned (leftovers from Thanksgiving dinner’s spiral sliced ham). I drained it and chopped the ham to stir into the casserole, then I poured milk over the casserole.

When we returned I turned the oven on and baked the concoction while I helped with homework. In 45 minutes we had a reasonably tasty, well-balanced meal ready. 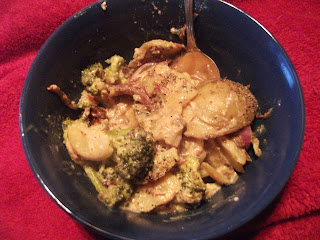 I was smarter tonight – I baked some granola cookies that will be prominently featured in tomorrow’s menu!  Recipe and pics of the healthy deliciousness will be posted tomorrow.
This whole “from scratch” thing is definitely an adjustment!  Many of the quick meals that I am accustomed to reaching for now require forethought.  Although the early part of my day was rather carb-deprived, I’ve planned better for tomorrow!
Share1
Tweet
Pin
Share
1 Shares