It’s Been One Year Since the Parkland Shooting. This School Hired Combat Veterans to Fight Back 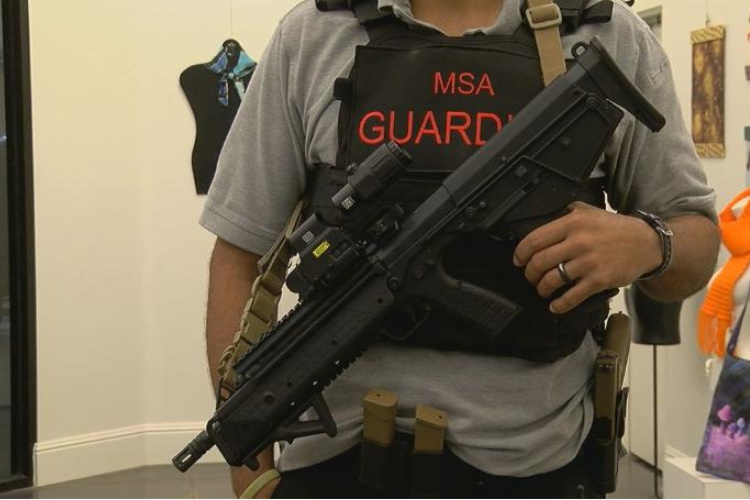 A year ago today, Nikolas Cruz opened fire at Marjory Stoneman Douglas High School in Parkland, Florida, killing seventeen defenseless students and staff members and injuring seventeen others. During the mayhem, a sheriff’s deputy was on the scene…hiding behind his vehicle.

It was an event that probably could have been prevented, if the police, the FBI, and others had paid attention to all the warning signs that Cruz was deeply troubled and likely dangerous. He even left this comment on a YouTube video: “Im [sic] going to be a professional school shooter.” That comment was reported to the FBI, but the agency claims it could not track down the person who wrote it.

The day after the tragedy, a Florida teacher named Kelly Guthrie Raley posted a rant on Facebook about the real cause of school violence. Here’s an excerpt.

Okay, I’ll be the bad guy and say what no one else is brave enough to say, but wants to say. I’ll take all the criticism and attacks from everyone because you know what? I’m a TEACHER. I live this life daily. And I wouldn’t do anything else! But I also know daily I could end up in an active shooter situation.

Until we, as a country, are willing to get serious and talk about mental health issues, lack of available care for the mental health issues, lack of discipline in the home, horrendous lack of parental support when the schools are trying to control horrible behavior at school (oh no! Not MY KID. What did YOU do to cause my kid to react that way?), lack of moral values, and yes, I’ll say it-violent video games that take away all sensitivity to ANY compassion for others’ lives, as well as reality TV that makes it commonplace for people to constantly scream up in each others’ faces and not value any other person but themselves, we will have a gun problem in school. Our kids don’t understand the permanency of death anymore!!!

I fully agree with Mrs. Raley. Guns are not the problem. Something much deeper is at the root of these tragic events.

Because school shootings are a real risk, actions do need to be taken to keep students, teachers, and staff safe.

It appears that Florida is attempting to implement tools that may actually help.

On March 9, 2018, the Marjory Stoneman Douglas High School Public Safety Act was signed into law in Florida. “The legislation outlines significant reforms to make Florida schools safer while keeping firearms out of the hands of mentally ill and dangerous individuals,” according to the Florida Department of Education. The law includes several provisions, including the creation of the Office of Safe Schools, the use of a mobile suspicious activity reporting tool, the establishment of a safety commission, new requirements for mental health services and training, safety assessments for each school, and requirements for a safe-school officer at each public school.

The Act also established the Coach Aaron Feis Guardian Program, named after a coach who died while shielding students during the Parkland massacre. It allows some school employees to become qualified and trained to carry guns on school campuses. Teachers who exclusively perform classroom duties are not eligible. The exceptions are JROTC teachers, current members of armed services, and former law enforcement officers. Administrators, support staff, and professionals who do not work exclusively in classrooms are eligible to become guardians.

Guardians would have no authority except to respond with deadly force to “prevent or abate an active assailant incident on school premises,” according to the law. They do not have the authority to make arrests.

One school in Florida has decided to take a more aggressive approach to the guardian program.

At the Manatee School for the Arts in Palmetto, they aren’t taking any chances.

The school went above the requirements of the law – it’s guardians are all military veterans with combat experience.

That certainly sounds like a wise plan, considering the abysmal response of the Broward County deputies who stood outside of Marjory Stoneman Douglas High School and hid behind a car while students and staff members were being massacred inside the building.

Many school resource officers assigned by local law agencies in Florida are armed with rifles, but they do not carry them. Instead, they are kept secured in racks built into their vehicles. But at the Manatee School for the Arts, guardians carry both Glock handguns and Kel-Tec RDB 17-inch semi-automatic long guns at all times. The rifle is a Bullpup, a configuration that allows for a shorter firearm with a long barrel, and uses .223 caliber ammunition, same as an AR-15. And, guardians at the school wear body armor that is similar to what is worn in combat.

The administration was also very particular in the ammunition used with the long-guns to avoid over-penetration. Officials selected a shell designed for hunting that can go through basic body armor an intruder might be wearing. But it won’t go through the intruder, lessening the risk to students and staff. (source)

Guardians are volunteers who are paid a $500 stipend.

The school is the first in the country to have guardians armed with long guns.

“There’s no guarantee that the guardian’s going to be where he’s needed at the time, but you do the best,” Jones said. “And certainly, the long gun gives you a better range.”

“If someone comes in with a handgun, great, then we have a tremendous advantage and we will use that advantage,” Jones added.

The school has hired two guardians. The first guardian, a 15-year U.S. Army veteran who served three tours in Afghanistan and Iraq, already patrols the campus. The second guardian is currently in training by the Manatee County Sheriff’s Office.

“People might think twice, particularly in our case, if you pull up and see a guy who is carrying a full-long gun,” Jones said. “If someone tried to come on campus with a weapon before we had our guardian program, there really is nothing much to stop that.”

The Manatee School for the Arts has also hired a mental health counselor, and time has been spent talking to students about security during various classes.

In addition to the armed guardians, the school is adding a guard gate that visitors will have to pass through to enter the campus.

As of now, Jones said he is not comfortable with the idea of all of the school’s teachers being armed.

“There are some, I’d feel very comfortable with,” Jones said referring to teachers who are military veterans. “But in general, I’d be a little bit hesitant to have an awful lot of people just walking around with a concealed weapon.” (source)

What do you think about this school’s approach to safety?

Does it go too far? Or, does it not go far enough? Do you think an armed guardian program should be expanded across the country? Share your thoughts in the comments below.