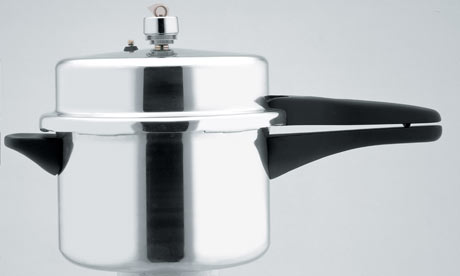 As it turns out, there is more to the story about the anti-terrorism task force’s visit to the family who was suspiciously Googling backpacks and pressure cookers.

The Google searches were the basis for the visit, but the former employer of Michelle Catalano’s husband was the person who put the searches together and thought, “Wow, these people must be terrorists.”

It also seems, according to Catalano’s clarification, that the men who searched the home and questioned her husband, wanted the family to believe that they had this omnipotent power to catalogue their searches.

We found out through the Suffolk Police Department that the searches involved also things my husband looked up at his old job. We were not made aware of this at the time of questioning and were led to believe it was solely from searches from within our house.

I did not lie or make it up. I wrote the piece with the information that was given. What was withheld from us obviously could not be a part of a story I wrote based on what happened yesterday.

The Suffolk County Police Department issued a statement as well.

Suffolk County Criminal Intelligence Detectives received a tip from a Bay Shore based computer company regarding suspicious computer searches conducted by a recently released employee.  The former employee’s computer searches took place on this employee’s workplace computer.   On that computer, the employee searched the terms “pressure cooker bombs” and “backpacks.”

Any further inquiries regarding this matter should be directed to the Suffolk County Police Department.

As seems to be the frequent case lately, the so-called answers lead to more questions.

Why would an average person look at someone’s searches and feel the need to tip off the police?  The media frenzy over the Boston Bombing, with all of the subsequent finger-pointing, has triggered a mass hysteria reminiscent of that which caused a school to suspend a little boy for biting his Pop-Tart into the shape of a gun shortly after the Sandy Hook school shooting. It’s like a kid who watches a scary movie before bed – suddenly, every noise becomes scary and every shadow suspicious.  The press has created an atmosphere of fear and mistrust.  We’ve been purposely divided and it is only a matter of time before this allows us to be conquered.

Why would the police mislead the family to cause them to think that they were victims of the overreaching powers of the NSA? More and more, we are seeing shocking Youtube videos and reading alternative media reports about cops who abuse their authority.  In this police state rising, many “authorities” seem to enjoy intimidating people and creating and atmosphere of subjugation.

What can we take away from this?

1.) Nothing that you do on the internet is private (especially on a work computer).

Information can be collected and reassembled to paint any picture wanted.  Yesterday, I quoted Cardinal Richelieu: “If one would give me six lines written by the hand of the most honest man, I would find something in them to have him hanged.”

2.) Citizens have succumbed to a media-fueled mass hysteria.  And if they aren’t hysterical and just want revenge on a former employee, the mass hysteria made that a whole lot easier too.

3.) Google will rat you out one a dime and sing like a canary on crack.  Alexis Tsotsis from Tech Crunch wrote:

While Google’s, or PRISM‘s, tracking of  Internet activity wasn’t behind this incident, the fact is that Google does comply with law enforcement to hand over user data in general. Can the FBI or local police provide a search warrant to Google, and would Google possibly comply with such a request? Yes, and the company publishes all requests in a report every six months. This is nothing new.

And wider requests, like for the months of search history that would be needed to figure out the pressure cooker and backpack coincidence, may result in a push to narrow the scope of the investigation from Google’s end.

If it adds to the intimidation factor and gets people to comply, it appears that police officers have no problem fueling people’s fear.  I have no doubt in my mind that the police in this situation wanted the family to believe they had been NSAd.  Most people are going to be a whole lot more compliant if they think that everything they have done in the past 6 months could be reassembled to paint a picture of them as terrorists.  “Sure, please search my house and allow me to prove I haven’t done anything wrong.”  The family in this situation was not given the whole story, and I believe that was done purposely.

An Atmosphere of Suspicion

What has been created is an atmosphere of suspicion.

According to Claire Wolfe, this is a step towards the corruption of our culture:

Think of East Germany under the STASI or the old Soviet Union. Literally husbands couldn’t trust their wives. Parents couldn’t trust their children. Brothers couldn’t trust brothers because so many were reporting to the state. Now, some countries that knew the horror of snitch culture forbid or limit the use of snitches. At the same time, formerly free nations are relying on snitches for everything and encouraging every moron in the land to “see something and say something.”

We’re being divided, intimidated and controlled.  And make no mistake…it’s deliberate.