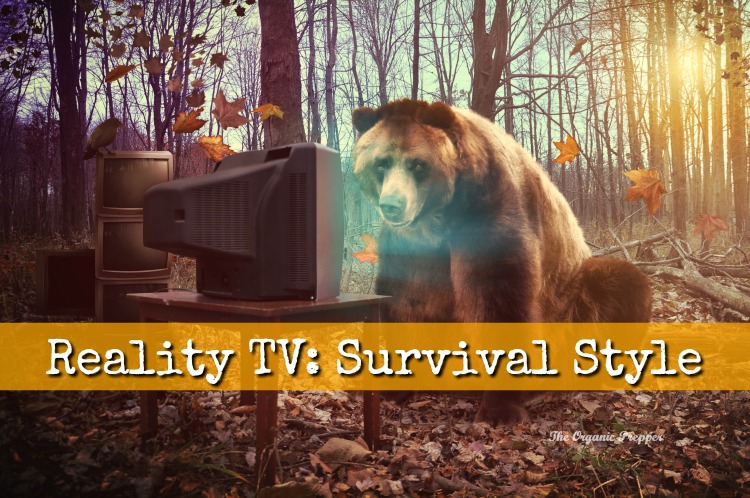 Most preppers don’t live out in the boonies without television, internet, satellite, or some kind of streaming system for entertainment. Lots of us enjoy kicking back and watching a movie or program, particularly if we can tie it in with our lifestyle.

We’ve talked about choices for your prepper movie marathon and series to binge-watch, but what if you’re looking for something non-fictional?  Forget the overblown shows that are designed to make us all look like fruitcakes. Check out some programs that showcase real survival skills.

When I asked you recently what your favorite things to watch were, I was looking more for fictional stuff. But it turns out, preppers like reality TV – just not shows about shallow characters like the people merely famous for being super-rich or people competing for the chance to marry somebody they don’t even know.

We like our reality shows to actually be…well… reality.

Here are some of your top picks for reality TV, survival style.

Frontier House, a six-part hands-on history series, took three modern-day families back in time to live like the 1880s homesteading pioneers in Montana. The families headed west in May 2001 and resided there until October, with just the tools of the period at their disposal. Throughout their historic adventure, the families’ trials, triumphs, simple pleasures, and daily rigors were revealed. (via PBS)

You can watch it on YouTube – here’s a link to Part 1 and you can find subsequent links in the sidebar.

Pioneer Quest: A Year on the Prairie

Pioneer Quest follows two couples as they assume the lives of early settlers to the West and spend one year living as 1870s pioneers on the Canadian prairie. Using only the resources and tools of the period, they will attempt to build homes, raise livestock, hunt, and grow crops. No running water. No electricity. No modern conveniences.

Find it free to stream here if you have Amazon Prime.

SOS: How to Survive

“SOS: How to Survive” presents gripping true stories of people who suddenly find themselves in a life and death battle with the elements. Survival expert Creek Stewart and his team show viewers innovative skills that teach us how to make it out alive. (via The Weather Channel)

This is a channel on YouTube about 18th-century living and cooking. Some great skills can be learned from watching the program.

On Christmas Day 1974, the eye of Cyclone Tracy ripped through Darwin. Over 100 people were killed, 20,000 were left homeless, and 80 percent of the city’s buildings were destroyed. It was the worst natural disaster in Australian history.

This miniseries is available from Amazon Prime.

Tales from the Green Valley

In this BBC documentary series, we get to follow a small group of historians and archeologists as they recreate farm life from the age of the Stuarts. They wear the clothes, eat the food and use the tools, skills, and technology of the 1620s for one year.

Historian Ruth Goodman and archaeologists Alex Langlands and Peter Ginn face up to the challenges of the biggest revolution ever seen in the history of the British countryside as they turn Manor Farm back to how it was run in the Second World War. When Britain entered the war, two-thirds of all Britain’s food was imported – and now it was under threat from a Nazi blockade. To save Britain from starvation, the nation’s farmers were tasked with doubling food production in what Churchill called ‘the frontline of freedom’.

Have you ever wondered what it would be like to live your life off the grid? Have you wished you could shed the complications of modern society and live in the wilderness, using only the things nature has provided? Meet Eustace Conway, Tom Oar, and Marty Meierotto, three men who have devoted their lives to survival in its simplest form. But how simple is it really?

This show is available from Amazon video and on the History Channel.

For 21 days, one man and one woman – meeting for the first time in the nude – are paired and tasked to survive in some of the world’s most extreme environments… with no food, water or clothes. They will need to surmount physical challenges to create shelter, forage for food and find water. But as the days wear on and the danger ramps up – the mental challenge can become unbearable… Will any of them be strong enough, physically and mentally, to last 21 days NAKED AND AFRAID?

Some episodes are available for free on the Discovery Channel and you can find the whole series on Amazon.

Expert homesteader, Marty Raney, along with his daughter Misty and son Matt, give struggling families a second chance at surviving off-the-grid. The stakes are high, but the Raney family is determined to prepare these families for nature’s worst and set them up for success.

You can stream this from the Discovery Channel.

7 pairs of family members travel to Northern Vancouver Island, a remote and rugged region of British Columbia known as the “Wet Coast”. Each duo will be separated from their loved one and dropped miles apart with 2 ultimate goals; navigate the brutally thick wilderness in an attempt to locate their family member and survive as long as they can, completely isolated and alone. The participants will only have the contents of their small backpacks, enough camera gear to record their experience, and ten tools split between them. Once reunited, each team must create their own shelters, pull food from the ocean, overcome harsh terrain, bitter cold, drenching downpours, contend with a host of deadly predators and each other. They will truly be on their own. No camera crew. No gimmicks. Last team standing wins.

Stream this from the History Channel.

Primitive skills master Matt Graham (“Dual Survival”) returns to Discovery Channel to see who has what it takes to survive in the wild. He invites other bushcrafters from across the country to compete head-to-head in grueling seven-day challenges. Each week, two survivalists test their skills in different environments, landscapes, and primitive living situations as they create eye-popping builds, from bridges and weapons to structures and transportation modes. Using nothing but ingenuity, a few simple hand tools and resources nature provides, the bushcrafters are pushed to the limit mentally and physically.

Available for streaming on the Discovery Channel.

Swords may not be the weapon of choice for many people nowadays, with more advanced weaponry readily available, but that doesn’t stop some from continuing to work as bladesmiths. “Forged in Fire” tests some of the best in the field as they attempt to re-create some of history’s most iconic edged weapons.

You can stream this from the History Channel.

Life Below Zero is a documentary television series that illustrates the daily and seasonal activities of subsistence hunters as they make their living in remote areas of Alaska. Produced by BBC Worldwide, the show airs on the National Geographic Channel.

You can stream all ten seasons on the National Geographic Channel.

Back to the beautiful state of Alaska for another reality-documentary series, this one set in the Arctic National Wildlife Refuge, a protected area home to thousands of native animals… and a handful of people. In 1980, the U.S. government banned human occupation in the refuge, and only residents in seven permitted cabins are allowed to remain. The series depicts the daily rituals of four families living in isolation and contending with bitter weather, frustrating setbacks, and aggressive wildlife in an unspoiled and unforgiving wilderness.

This show is available to stream on the Discovery Channel site.

The Colony is an experiment that simulates a post-apocalyptic world in which ten volunteers (colonists) are tasked with surviving and rebuilding everything from scratch, using only raw ingenuity and supplies they scavenge from their environment.

This show is available on Amazon.

The Wheel dares six participants to survive in six distinctly grueling landscapes across South America. With every turn of the wheel, each survivalist is dropped into a new isolated location, exposed to the world’s deadliest terrains, including freezing tundra, rugged mountains, and treacherous rainforest. Participants don’t know when or why the wheel will turn – nor that their stint at each spot is determined by the rotation of the moon. Equipped only with light survival packs and SOS devices that can be used at any time to quit the challenge and call for help, they must fend for their lives by procuring food, water, and shelter. And when the wheel turns again, they will be thrust into a new location, forced to use a completely different set of skills to survive.

Stream from the Discovery Channel.

What are your favorites?

Do you enjoy documentaries and survival reality shows? Share your favorites in the comments section below. 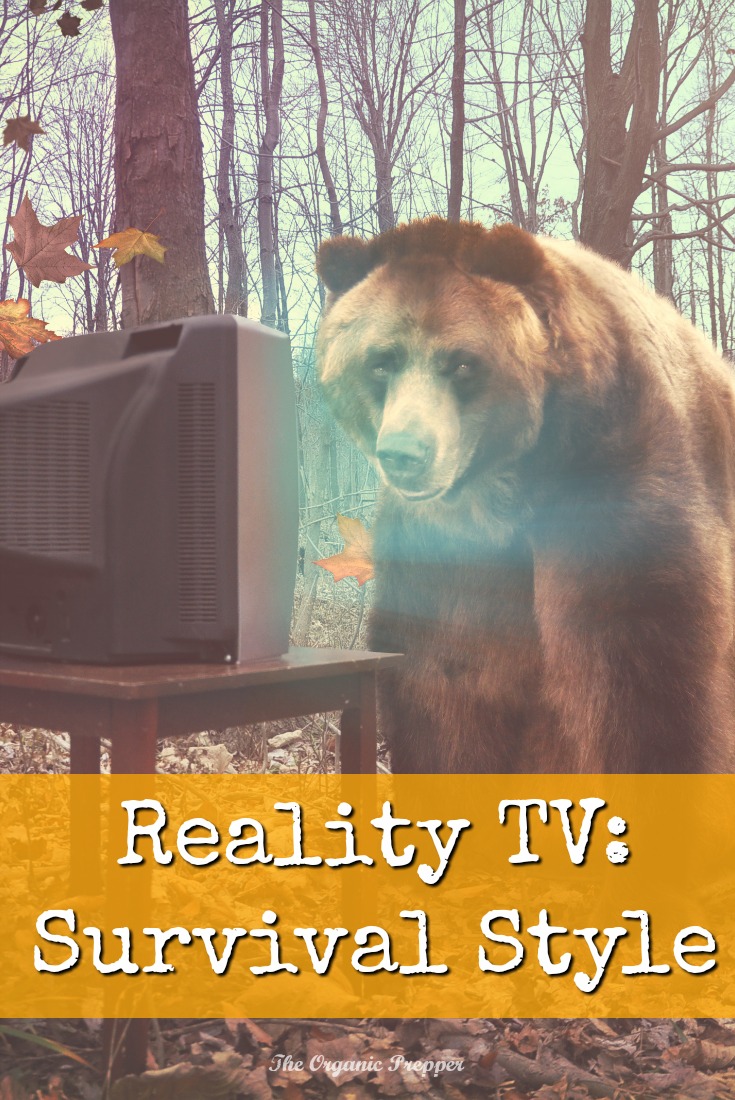