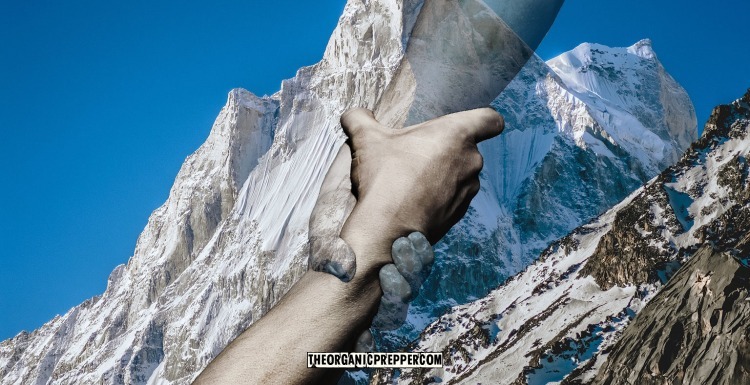 Being involved in prepping, some readers are likely naturally curious when it comes to tales of survival. Often in survival stories, there’s something unexplainable that helps people to get through extreme scenarios. The following stories all share something known as The Third Man Factor.

“Who is the third who walks always beside you? When I count, there are only you and I together. But when I look ahead up the white road, there is always another one walking beside you.” T.S. Eliot, The Wasteland and Other Poems

The Third Man Factor is the widely reported, mysterious phenomenon of feeling a presence during extreme situations. Survivors recall experiences of being guided or helped by the sometimes seen, sometimes heard, shadowy form.

Below are just a few real-life stories in which the survivors recount their miraculous encounters with these guardians.

Aboard his ship, the Spray, Slocum attempts to become the first person to circumnavigate the globe alone. However, food poisoning has left him incapacitated, and a violent storm has left the weakened sailor without much hope for making it through the night.

It’s in the middle of this storm that Slocum experiences something phenomenal. An unexpected visitor. Claiming to “come to aid” him, the visitor tells Joshua, “Lie quiet…and I will guide your ship tonight.”

Slocum makes it through the night without the waves swamping his ship. Later, he would write a book about his experience, an international bestseller, Sailing Alone Around the World.

After the ice leaves Antarctic explorer Ernest Shackleton and his crew trapped on an ice floe for 15 months, the men realize they will have to escape by sea if they ever wish to see humanity again. Using small whaling boats, the men set sail into the unknown, landing at the uninhabitable Elephant Island three days later.

Shackleton’s only hope is to continue sailing on to a whaling depot 680 miles away. Shackleton sets sail for 14 days, taking five other men with him, miraculously reaching South Georgia (island home of the whaling depot).

However, they’ve landed on the wrong side of the island in the middle of a hurricane. Taking two others with him, Shackleton now mountaineers through the heart of the mountain, reaching the whaling depot on the other side the following day.

Upon writing his memoirs (South! The Story of Shackleton’s Last Expedition 1914-1917) after the ordeal is over, Shackleton reveals:

“When I look back at those days, I have no doubt that Providence guided us, not only across those snow-fields but across the storm-white sea that separated Elephant Island from our landing-place on South Georgia. I know that during that long and racking march of thirty-six hours over the unnamed mountains and glaciers of South Georgia, it seemed to me often that we were four, not three.”

His ice ax jams in a crack, keeping him from the fall.

“All the time that I was climbing alone, I had a strong feeling that I was accompanied by a second person. This feeling was so strong that it completely eliminated all loneliness I might otherwise have felt. It even seemed that I was tied to my ‘companion’ by a rope and that if I slipped ‘he’ would hold me. I remember constantly glancing back over my shoulder.”

Frank Smythe would reach the peak, where, celebrating with a mint cake, he broke it in two and held out one half to his companion.

James and his friend Richard are spending the day mountaineering throughout the Canadian Rockies. It is the last day James will see his friend alive.

As they make their way up Mt. Deltaform, an avalanche sweeps both men all the way to the base of the mountain. When James wakes up, he has a broken back, arm, ribs, teeth, nose, and scapula. In addition to the bone breaks, James has also torn ligaments in both his knees, has internal bleeding, has open wounds, and cannot raise his right arm.

His friend Richard is dead.

James lays down to die but then, 20 minutes later, feels a presence. He felt someone behind him and heard a voice: “No, you can’t give up. You have to live.” [source]

“It told me what to do. The only decision I had made at that point in time was to lie down next to Rick and to fall asleep and to accept death. That’s the only decision I made. All decisions made subsequent to that were made by the presence. I was merely taking instructions.

Miraculously, James was able to crawl his way back to rescue, where cross-country skiers discovered him. James would live to tell the tale.

It is the morning of September 11, and Ron DiFrancesco’s world has erupted in chaos. He’s on the 84th floor of the South Tower.

DiFrancesco struggles through the smoke down the stairwell. He and many others are forced to stop by a collapsed wall. Smoke is choking out oxygen in the room. DiFrancesco collapsed to the floor, and just then, something remarkable happened.

“Someone told me to get up,” DiFrancesco would later state. The voice calling him ‘Ron’ encouraged him to keep moving forward. Ron would later say, “somebody lifted me up.”

“I was led to the stairs. I don’t think something grabbed my hand, but I was definitely led,” Ron would recount after the ordeal.

DiFrancesco ended up finding a way down the stairwell, even though a wall of flames blocked him off at one point. The voice “led” Ron to run through the fire.

Ron was the last person to make it out of the South Tower alive.

In 2013, Daisy is out hiking with family and friends. A misstep onto a loose rock sends her tumbling about 40 feet down a steep, rocky, bramble-covered ravine. She loses a shoe in the fall, lands on a large stone that was blisteringly hot in the California sun, and is bruised and abraded from head to toe. Her friend comes to help and retrieves her shoe, then they begin to make the perilous journey back up the steep cliffside, slipping and sliding on the loose stones.

But then something strange happened.

A voice from the trail above them asks, “Are you okay?”

Daisy’s friend told the two hikers that she had fallen and we were trying to get back up to the trail. Daisy tells the story:

The man was down the side in a flash, holding out his hand to me. He told me to look into his eyes and said, “I swear I will not let you fall. Trust me.” Then he said, “Dig deep,” and he pulled me up 20 feet to safety in what seemed like only two steps.

He helped my friend to the top as well. At this point, other hikers had stopped to help, offering water and a place to sit. I turned to thank our Good Samaritan…and he and his companion were gone. I wondered, “Did I hit my head that hard?” but my friend had also seen him and he’d pulled her up also. None of the other hikers seemed to know who we were talking about.

To this day, I cannot explain who that man was, how he pulled me up so fast, or where he went.

Are you interested in reading more about The Third Man Factor?

Then may I recommend John Geiger’s book on the subject, The Third Man Factor: Surviving the Impossible.

It’s a fascinating book that – to my knowledge – is the most complete anthology of Third Man-style tales amongst survivors out there. It’s where I found the stories from above, and there are many more just like it bound within the covers of this book.

What is the cause of The Third Man Factor?

Researchers have attempted to explain these “visions” as neurological and physiological, brought on by the traumatic events themselves. Still, no two stories are the same and the possible reasons don’t seem to fit. Geiger doesn’t explicitly say what he believes, but he does state:

“Clearly, there is a spiritual or religious explanation to this phenomenon.” However, Geiger says there is also some very interesting science behind The Third Man Factor. [source]

What do you think about The Third Man Factor?

Is this a benevolent being coming to the aid of humans in distress? Or, is it something deep within us which helps us access the incredible abilities we didn’t know we had? What are your thoughts on The Third Man Factor? Let’s talk in the comments section.

Aden Tate has a master’s in public health and is a regular contributor to PewPewTactical.com, SurvivalBlog.com, SHTFBlog.com, ApartmentPrepper.com, HomesteadAndPrepper.com, and PrepperPress.com. Along with being a freelance writer he also works part-time as a locksmith. Aden raises dairy goats, a pig, honeybees, meat chickens, laying chickens, tomatoes, mushrooms, and greens on his microfarm. He also has two published books, The Faithful Prepper and Zombie Choices. You can find his podcast The Last American at Preppers’ Broadcasting Network. 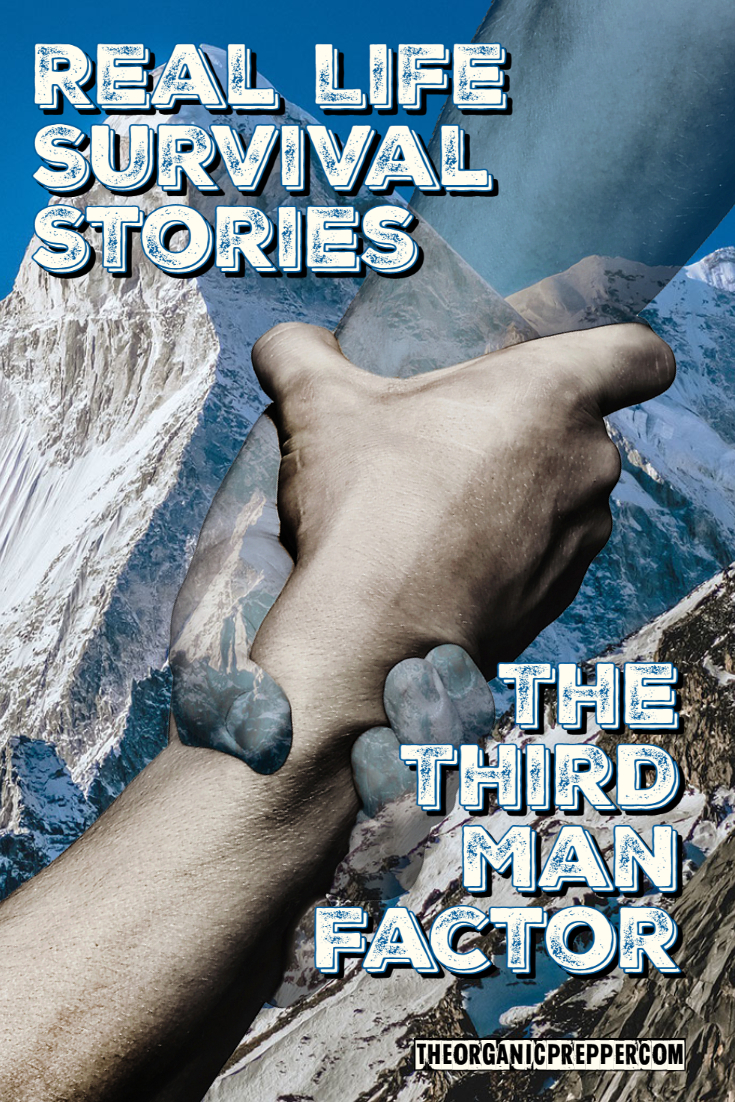