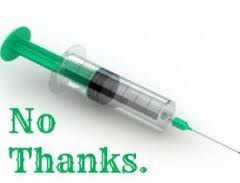 A registered nurse in Pennsylvania was fired for refusing to get a flu shot.

Dreonna Breton made the decision to refuse the shot because she’s pregnant and has a history of miscarriage.

“I want to give this baby the best shot that I can. There are just things in the flu vaccine that are not known, like how it affects my growing baby,” said Breton.

Breton worked for Horizon Healthcare Services, which provides drug and nutrition infusion services to patients in their homes. Horizon is co-owned by Lancaster General and several other hospitals, including Harrisburg-based PinnacleHealth System.

Her former employer allows religious and medical exemptions to vaccines. Breton says she explained her concerns about the shot to her employer and provided a doctor’€™s note which described her history of miscarriage. Her health care provider wrote, “€œIn my view getting the flu shot would significantly and negatively impact her health because of the increased fear and anxiety it would create as well as the emotional impact it could cause if she does miscarry again.”

The hospital said Breton’s reason for denying the shot was not valid and terminated her. Carolyn Carlson, a registered nurse and the president of Horizon, said in an email to PennLive that requests for exemptions are reviewed by a committee of doctors. She said that flu vaccination is a condition of employment because it “€œprotects our patients, employees, and community from getting this potentially serious infection.”

In years past, pregnancy was also a contraindication to flu vaccine but, today, the Advisory Committee on Immunization Practices (ACIP) of the Centers for Disease Control (CDC) recommends flu vaccine for women more than 14 weeks pregnant.

The package inserts published by the flu vaccine manufacturers state that “Animal reproduction studies have not been conducted with influenza virus vaccine. It is also not known whether influenza virus vaccine can cause fetal harm when administered to a pregnant woman. Although animal reproductive studies have not been conducted, the prescribing health care provider should be aware of the recommendations of the Advisory Committee on Immunization Practices. The ACIP states that if used during pregnancy, administration of influenza virus vaccine after 14 weeks of gestation may be preferable to avoid coincidental association of the vaccine with early pregnancy loss.”

Pregnant women should be aware that the flu vaccine contains Thimerosal, which is a mercury derivative. Mercury is toxic to the brain and has been found to be associated with brain damage and developmental delays in babies whose mothers were exposed to high levels of mercury during pregnancy.

Warnings in flu packaging like this one concerned Breton: “€œFluzone should be given to a pregnant woman only if clearly needed.” She said she has thoroughly researched flu vaccine and “struggled to find the science behind mandated flu vaccinations.”€

“It would be a false statement to say the flu vaccine is known to be safe during pregnancy. €œI have lost my job, one that I love and am good at, because I chose to do what I believe is best for my baby,” Breton said.

During the 2012-2013 flu season, the flu vaccine’s effectiveness was found to be just 56 percent across all age groups reviewed by the CDC —in essence, the statistical equivalent of a coin toss. In seniors, aged 65 and over, the US flu vaccines were only nine percent effective.

What sense does it make to force a toxic vaccine that has such a low effectiveness rate upon a pregnant woman whose unborn child could suffer harm? Breton was yet another casualty of the senseless “get your flu shot or lose your job” ultimatum that is being pushed on nursing home and healthcare workers.

Contributed by Lily Dane of The Daily Sheeple.

Lily Dane is a staff writer for The Daily Sheeple. Her goal is to help people to “Wake the Flock Up!”