How to be a Peaceful Person in a Hostile World 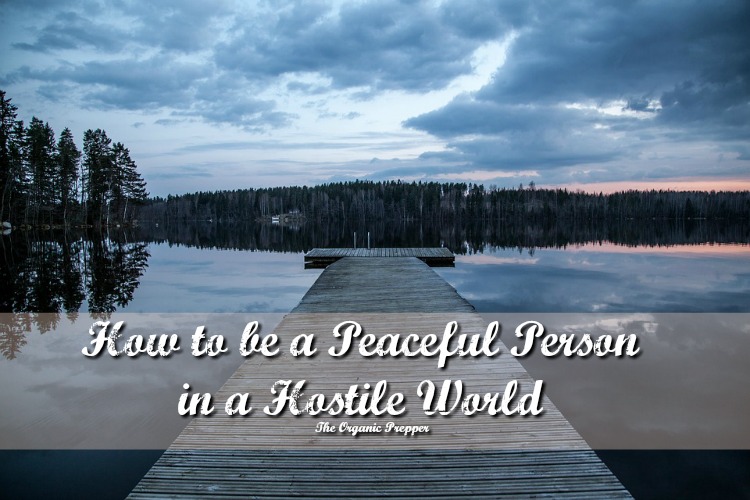 It’s the hottest day of the summer so far. The mercury is way up there, and all you want to do is stay in your nice air-conditioned home until it cools off after dark. But alas, you have a life, and you have to go outside. The second you open your door, the heat blasts you so hard it feels like a physical blow.

That’s exactly what it’s like online right now, no matter where your politics lie.

Except instead of heat, it’s a blast of hostility, hatred, and rage.

The Death of Civility

After the most tumultuous election many of us have ever personally witnessed, the animosity still hasn’t waned three months after the shocking (to some) results were announced.

I’ll try to lay this out without divisiveness because taking sides isn’t my goal here.

One side is unwilling to accept that the election didn’t go their way. Their rising and noisy discontent has enflamed the opposite side.

The result is ugly.

It’s all-out verbal war on social media, as people spew hate-filled, destructive things to one another. There is hardly any attempt for understanding on either side. Instead, there are threats, mockery, name-calling, and spite. If you call anyone out on their behavior, you are instantly named a supporter of “the other side.”

Basic civility seems to be dead, as people laugh at the fate of innocents, blithely plan violent events, and fan the flames of rage. They insult others and laugh at their misfortunes.

Meanwhile, those flames are fanned by the media. Left. Right. It doesn’t matter which side. From both biases, there are breathless denouncements of “the enemy” that just tick people off more.

Politicians certainly aren’t helping either, using their platforms to stoke the anger levels even higher.

While there are some genuine hard feelings out there, these entities are throwing gallons of gasoline on the fire on a daily basis – and they’re making a ton of money doing it.

Not just annoyed. Not just a bit tired. Sick to my very soul to see how low so many people have plummeted.

It’s times like these when you see the true nature of the people around you. And sometimes what you see isn’t pretty.

I can only imagine that if the situation was truly dire, and the last bit of food was involved, that these are the people who would be out there fighting for it. Terrible picture, isn’t it?

A lot of people are feeling hopeless about the future right now.

These are the things you really can’t control.

First, let’s talk about the things that are completely out of our control.

We can’t change what is reported in the media. Heck, half the time we can’t even decipher whether it’s true or false. But here’s what we can do:

We can’t change the hearts of people who have descended into hate. They’re going to have to dig themselves out of that pit.  But here’s what we can do:

We can’t do a whole lot about the major policy decisions being made. Getting sucked into angry debates that descend immediately into ad hominem attacks is a waste of time and energy. But here’s what we can do:

You do not have to participate in the current climate of incivility. This is optional, and you can opt out.

No matter where your political beliefs lie on the left-to-right scale, there is something you can do to make life better instead of bitter.

Focus on the things you can control.

We can concentrate on the way we spend our days.

If you spend all of your time wallowing in the mire, you’re going to get dirty too. It isn’t your job to tell people who aren’t going to listen that they should be nicer. Trust me; I’ve made plenty of those fruitless efforts myself.

I’m not saying that you need to live in a bubble, oblivious to the world around you. As someone who lives a preparedness lifestyle, it is essential to stay informed of current events.

Your take on things will make someone angry. It’s inevitable these days.

But don’t get sucked into the ugliness.

Walk away when you see incivility because you are not a referee, the official arbiter of right and wrong, or the person responsible for the behavior of others.

You can control what is in your own heart, the actions you take, and the company you keep. You don’t need to get in lockstep with a political party, an angry group, or a movement.

You need to focus on what is right, and you know that being cruel and wishing horrible things on people with whom you disagree isn’t right.

These things are certain.

With the future of our country looking so uncertain, some things are certain.

These are all things that you can control, at least to some degree. These are the reasons we prep and probably why you are here, reading this website.

The place you spend your time, your energy, and your passion is the place where things will grow. Do you want to grow something beautiful or something ugly?

Focus on nurturing that which you want in your life because therein lies peace.

Stop fertilizing the weeds. If other people want to fight it out online, will it really benefit your life to join the verbal battle?

When we add our voices to the hostile din, we just make it louder. Opt out.

Be a peaceful person in a hostile world.