It’s Not Doom and Gloom: Preparedness is the Ultimate Act of Optimism 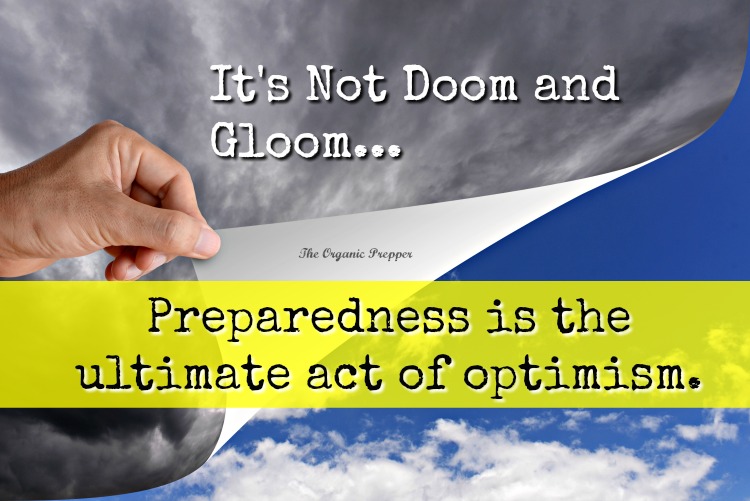 You’re talking to a friend or family member who isn’t on board with preparedness.  (And it’s even worse when they think they know what’s going on in the world but garner their so-called “information” from network news sources.)  You try for the millionth time to get them to consider stocking up on a few things and they say this:

Life’s too short for all of this doom and gloom.  Live a little! You’re such a pessimist!

My response to this is that preparedness is the ultimate form of optimism.

One who practices skills, makes dramatic lifestyle changes, and studies current events critically may come across to the uninitiated as a person who has buried himself or herself in negativity, but in fact, one who prepares is saying to life, “Whatever comes, we are not only going to live through it, my family is going to thrive!”

I think that methods of preparedness can be compared to love songs on the radio.  Bear with me through this analogy.

If the songs that make you think of your significant other are sad, with reference to breaking up and getting back together, unsatisfied yearnings, arguments, frustration, anger, and broken hearts, you just might be doing the whole “love” thing wrong.  Shouldn’t the song that makes you think of the one you love be happy, upbeat, full of joy? Shouldn’t thoughts of that special someone make you more prone to goofy smiles and a warm glow than to melancholy longing or the urge to gleefully burn all of their belongings in a great pile in the front yard?

It’s exactly the same with preparedness.  Thoughts of your plans, your lifestyle, and your loaded pantry room should give you a sense of peace and security.  If your state of preparedness makes you feel unhappy, stressed, angry, or resentful, you’re doing something wrong.

Here are some examples of how prepping is pure, unadulterated optimism.

But here’s what non-preppers don’t understand.

What non-preparedness people just can’t seem to understand is that what we seek is peace of mind, freedom, and security for our families, not just a weekend at Disneyworld.  We don’t wish to delude ourselves with the soothing lies and distractions of the mainstream media so that we can blithely go about the business of trying to guess which B-list performer is going to take the crown (do they have a crown?) on Dancing with the Stars. We like reality and we’d rather not have surprises.  We can still have fun that doesn’t compromise our ideals, sabotage our progress, or deter us from our paths.

We don’t want to be lulled into a false sense of prosperity, hypnotized by our iPhones and our “smart” wristwatches, or pacified with governmental lies about the “recovery.” We don’t want to deal with the aftereffects of shooting poisons into our babies, the ill health that comes from eating substances that aren’t even food but are guaranteed by the government to be “safe”, or stumble through life in a fluoride-induced brain fog.

We just want to go out to our garden and get some unsprayed heirloom tomatoes, for crying out loud, and thrive on real food, clean water, and an avoidance of Big Pharma chemicals.  When I look at my own rosy-cheeked child and compare her glowing health with that of her friends, I am thankful every single day that we take the extra steps to keep her nourished, toxin-free,  and whole, in defiance of a government and media that would have her chemically dumbed down and poisoned, literally, for profit.

Imagine that you are out for a walk, and you get lost in the woods. You end up wandering around for a couple of days, and you’re exhausted and hungry.  You come upon two bushes, different varieties of plants, both with brightly colored berries.

Preparedness: It means that whatever may come, you intend to not only grimly survive, but to thrive. It means that you foresee a day when the imminent threat, whatever that may be, diminishes, and you will rebuild. It means that you have taken responsibility for yourself and your family, and that you will not be forced to rely on others. It means that your mind is focused on life itself, not some imaginary life of some reality star that actually has no grasp on reality whatsoever. You have chosen not to be misguided by the lies that the media uses to pacify you.

Preparing yourself is the most optimistic and hopeful thing you can do in a world that would prefer to choose immediate gratification over a firm grasp on reality. Readying yourself to deal with whatever might happen is a joyful act, an expression of gratitude, peace made tangible, and the personification of faith itself.

Also, a quick  note to beginners:

Please, don’t let the thought of all of the preps that you do not yet have bring you down. It’s a process, and the most important prep is already in place: your mindset.  Once you know the possibilities, accept them, and begin to prepare, you are already far ahead of most of the neighborhood. You’ve taken the most important step, the first one, and the rest will come as long as you persevere. (Here’s a book that can take you through all of the steps to preparedness.) Don’t be discouraged by how much you have left to do, instead, be encouraged by how far ahead you are compared to your starting point. Never underestimate the magnitude of the importance of your state of mind.

A pessimist sees the difficulty in every opportunity;

an optimist sees the opportunity in every difficulty.

The Pantry Primer: How to Build a Whole Food Kitchen on a Half Price Budget

Information to help you get started prepping

How to Build a 30 Day Food Supply…Fast