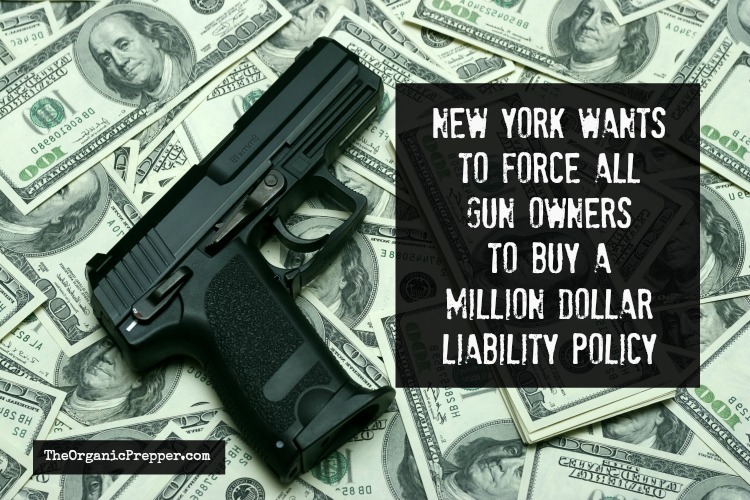 New York state is still busily chipping away at gun rights and now they’ve introduced Obamacare for guns. Legislators are hard at work trying to force every gun owner in the state (who isn’t a cop or active military) to purchase and maintain a minimum $1 million liability insurance policy.

§ 2353. FIREARM OWNERS INSURANCE POLICIES. 1. ANY PERSON IN THIS STATE WHO SHALL OWN A FIREARM SHALL, PRIOR TO SUCH OWNERSHIP, OBTAIN AND CONTINUOUSLY MAINTAIN A POLICY OF LIABILITY INSURANCE IN AN AMOUNT NOT LESS THAN ONE MILLION DOLLARS SPECIFICALLY COVERING ANY DAMAGES RESULTING FROM ANY NEGLIGENT OR WILLFUL ACTS INVOLVING THE USE OF SUCH FIREARM WHILE IT IS OWNED BY SUCH PERSON. FAILURE TO MAINTAIN SUCH INSURANCE  SHALL RESULT IN THE IMMEDIATE REVOCATION OF SUCH OWNER’S REGISTRATION, LICENSE AND ANY OTHER PRIVILEGE TO OWN SUCH FIREARM. (source)

Hmmm…privilege? I had no idea it was called constitutional privileges. I’m going to have to go back and fix some articles really quickly where I called them “rights.”

New York wants to make it impossible to own a gun. Although the bill clearly states it’s been read twice, it’s rife with grammatical errors, almost to the point of illiteracy. (I italicized them for ya.) But I digress. Under the heading “Justification” the bill states:

Injury and death by gun has increasingly become a problem in U.S. and in New York State. In the wake of recent mass shooting incidents in Aurora, Colorado and Newtown, Connecticut; there has been a nationwide attention on gun control and public safety.

According to FBI Crime Report, there were 445 firearm murderin New York in 2011 and 517 firearm murder in 2010. However, there is little attention on the economic impact these shootings have on the victims and their families.

This legislation establishes and requires gun-owners to obtain and maintain liability insurance policy prior to such ownership. By having this insurance, policy in place, innocent victims of gun-related accidents and violence will be compensated for the medical care for their injuries.

In such cases where the gun was stolen, the original owner is typically not liable unless the weapon was stolen through negligence on the part of the owner.

This insurance policy will also serve as an incentive for firearm owners to implement safety measures in order to conduct the activity as safely as possible and only when necessary.

This isn’t the first time recently that New York has proposed something outrageous.

In December of last year, they proposed a bill that would require anyone in NY who wanted to buy a gun to turn over their internet search history and their social media passwords. Seriously. According to Brooklyn Borough President Eric Adams, “A three-year review of a social media profile would give an easy profile of a person who is not suitable to hold and possess a firearm.”

Applicants to purchase a gun would be required by law to turn over their social media passwords to accounts like Twitter, Facebook, Snapchat, and Instagram, and they’d have to allow police to see a year’s worth of their searches on a year’s worth of searches on Google, Yahoo, and Bing.  As well, anyone renewing their permit for a pistol would be subject to this invasive investigation.

Now, for those of you sitting there saying, “That’s fine, I don’t use social media and I use Duck Duck Go or StartPage” this is great – for now.

How long do you think it would be before other outlets like blogs where you comment or these different search engines are added to the list of things that are searched? Trust me, if it gets passed, this is a greasy slide straight to the bad place. (source)

If you wondering what they’d be looking for, wonder no more.

Police would be required to look for evidence the applicant searched for or used racist or discriminatory language, threatened the safety of another person, inquired about or alluded to an act of terrorism, and, finally, “any other issue deemed necessary by the investigating officer.” (source)

How arbitrary is that? It’s basically down to whether the officer likes you and your beliefs our not.

Think for a moment about how much the investigating officer’s bias would come into play here. In some ways of thinking, people who say “all lives matter” are considered the epitome of racism even when taken out of context.

And what about a couple of women talking about a breakup using heated language in a conversation about the ex who has become the enemy? Are they really going to act on it or are they just blowing off some steam?

Then I think about my search history regarding terrorism – I’m a blogger, for goodness sakes. My search history is a dark place.  What if you’re researching what kind of gun you want to buy and you’re looking up things like “stopping power” or some other thing the anti-gun folks consider “scary” that is a completely legitimate question in reality?

And “any other issue deemed necessary” is just far, far too broad to provide any comfort whatsoever that the investigations would be fair and impartial. All of this is completely subjective. Anyone with a dark sense of humor, regardless of their sanity or upstanding citizen-ness, is going to be in for a hard time. (source)

It’s all just another paver on the highway to total gun control.

If you think this is crazy, stay tuned. It’s just going to get worse.