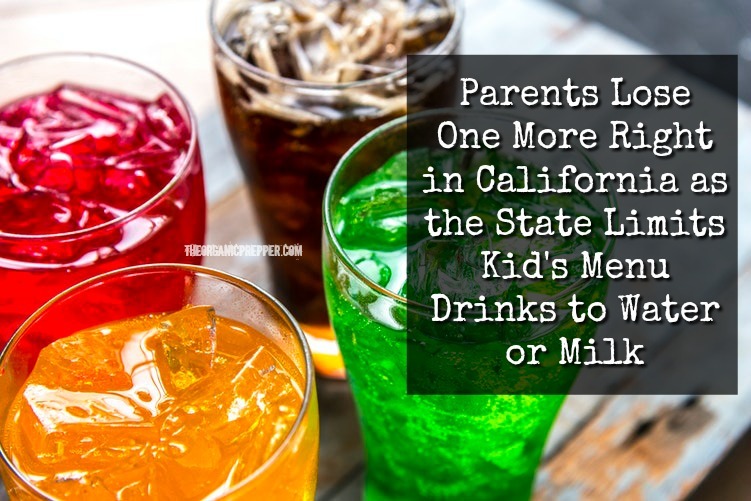 Yes, the rumors are true. California lawmakers passed a state law that forces restaurants within the state to offer only select beverages on children’s menus. Governor Jerry Brown signed SB 1192 into law in late September and it easily passed in both the State and the Assembly. Support for the nanny state law flew under the guise of what’s healthiest for the children.

The default options for beverages on children’s menus have been forced to change to unflavored milk and water.

In other words, one more option than a dungeon.

Please understand that we aren’t promoting giving children HFCS-laden sodas on a regular basis, but we ARE promoting parental choice. Adamantly.

Customers can order another drink for their child by request, but clearly, the point of the law is to make it difficult (and frowned upon) to order something “unhealthy” for their child. That’s how nanny-state health laws are usually created. In increments or with fines or taxes (see more below), and usually with some kind of societal shame tactic.

“Non-dairy fluid milk substitutes” containing under 130 calories can also appear as an option on the menu if that kind of drink is available at the restaurant. Again, this is an assumption of the “health” of the beverage and the idea of low calories being best for all children.

Should the government dictate what drinks a restaurant can serve to patrons? Do you want the government to decide what is healthiest for your children? When you go to McDonald’s, are you there for a fat-free kale smoothie? Is this giving you flashbacks to Nanny Bloomberg’s large drink ban in New York? (Which, I might add, was finally struck down in court as unconstitutional.)

That is precisely what is happening in California right as we speak. You are probably not surprised, but at the same time, when will the insanity stop?

Some people might not think a few menu option changes are no big deal in the grand scheme of things. But consider this: Food is more personal than politics and religion. At least you would think so to see people fight about it online. Food is the one thing people strive to have complete control over – three times a day – in regards to their personal liberty. Going to a restaurant is an “extra” that consumers enjoy at will. It’s all up to choice. So it shouldn’t be viewed the government as a health need.

Food can be more intimate to someone than the typical concept of intimacy. In reality, food IS a form of intimacy. Look at the way different cultures come together as families to enjoy a particular meal. When you start a relationship, you bond over food. For some families, a meal out is the only time when the kids get to drink a soda pop, as a rare treat. Should families at a restaurant be confined to paltry portions and plain tap water for an evening out? Perish the thought!

Bonding over food is a concept as old as time. Holidays feature certain cuisine. Most religions have some guidelines about food – and people still argue about it every day!

When you add to that the modern nuance of what constitutes a healthy food, now we’re talking a recipe for disaster.

So when a sweeping law suddenly takes away that choice from consumers who are spending their hard-earned money for a night out…you may have heard a swath of eyeballs rolling out of heads on the West coast. In Stereo.

Childhood obesity is certainly rising, but who is to say that crimping a beverage option from a weekly night out will fix the issue?

Nothing against dairy on this site, but it does cause some problems for a lot of people. So who is to say that prompting the parent to “choose” milk is automatically healthier than the occasional soda drink? One could surmise that orange juice is healthier than soda until you see how it’s made and realize that it’s not the wholesome fruit-based drink we think it is.

What are the fines for disobeying government nanny health rules?

According to Intellectual Takeout:

According to the new law, violations of the rule will be punishable by fines up to $500:

As with most government policies that restrict individual and economic freedom, lawmakers appealed to the public good in order to justify the new regulations. According to Section 1 of the legislation:

From 1990 to 2016, inclusive, the obesity rate in California increased by 250 percent. While the increase was greatest from 1990 until 2003, recent trends suggest a continued increase in obesity among children.

The solution, they argue, is to “support parents” efforts to feed their children nutritiously by ensuring healthy beverages are the default options in children’s meals in restaurants,” ultimately improving “children’s health by setting nutritional standards for a restaurant’s children’s meals.”

The reasoning almost makes sense. If we reduce obesity and help children grow up healthy, then it will lessen the economic burden by the annual $9.1 billion spent on obesity-related health problems. But right there you can see that it’s really about cutting costs. Not much was done when childhood obesity climbed to a degree never before seen in American history.

Unequivocally the data is clear: the high-fructose corn syrup found in soft drinks increases weight gain much faster than table sugar in the diet.

Why not say to the soft drink companies, you’ve placed a harmful ingredient in beverages that is now found to be harmful and strongly correlates with the highest childhood obesity spike we’ve ever seen in the history of the United States of America. You need to switch back right now. We the Nanny made a mistake by subsidizing so much corn. We’ll start getting that sugar cane back in.

Instead, the Nanny state points a finger to your inexplicably fat child and says he is a burden on Nanny. No soda pop for you!

California doesn’t have a glowing record for parents’ rights.

Don’t forget that Governor Jerry Brown signed one of the toughest vaccine laws in recent history. He removed all exemptions for vaccines for school-aged children (except the medical kind which are nearly impossible to get). Not exactly a champion for children’s health. Parents in California are getting kicked in the teeth.

And when California inevitably forces every citizen to eat, drink and move only in ways that are approved by the Government, their economy will crash from people crossing the border to have any semblance of fun.

Californians are already leaving the Golden State in droves, and this is no fun for Arizona as it means that the contrasting laws that they enjoy could be overturned by the coastalites.

Previously, California banned the sale of soda pop in schools. But, teens then apparently took to sports drinks.

As a 2013 study on the effects of soda bans published in the International Journal of Behavior Nutrition and Physical Activity warned, “State laws that ban soda but allow other SSBs [sugar-sweetened beverages] may lead students to substitute other non-soda SSBs.” (Unsurprisingly, California lawmakers also tried to ban sports drinks in schools in 2010. They failed, but the USDA passed a nationwide ban in 2013).

[…]A 2018 UCLA study found that while adolescent soda consumption was down in California, sugar consumption overall was still on the rise.

Prohibition failed. The War on Drugs failed. Taxing sugar and fat failed. (It was a world’s first and a big fat failure.) Yet governments keep trying to punish the individual with more restrictions and fines. Maybe it’s to get us used to having nothing.

People want their fix and in the end, they have a right to their choices.

If you even have to at all.