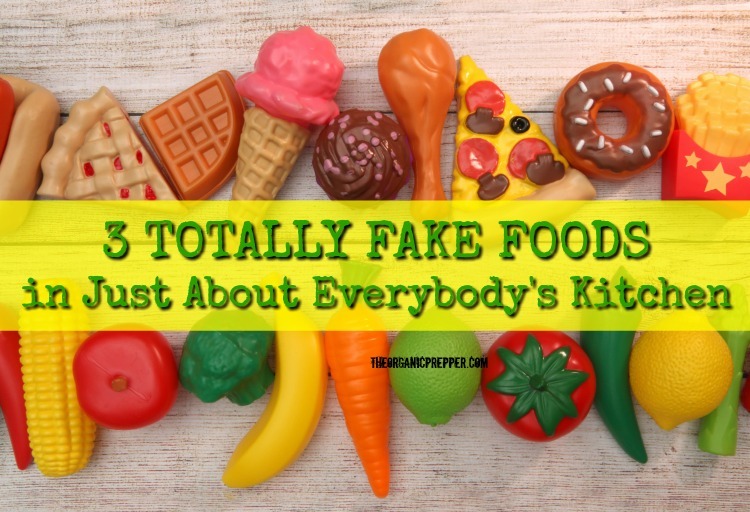 Americans are eating fake foods. It’s sad but true that many American staples are fraudulent. Going to the grocery store and searching for whole, nutritious foods is like running a gauntlet of lies.

The American food system is as fake as a toupée. I remember an Eastern European female basketball player being on Jay Leno and going on and on about how fake American food tasted. She even compared our fruit to wax fruit displays. That’s actually astute considering that a lot of produce is covered in wax to protect it for longer periods on store shelves. Since then, I’ve heard other foreigners bemoan American food for its fakery. Waxy tasting chocolate, bland produce, neon-colored party snacks that sent them running to the nearest bathroom.

Did you ever see a martini menu but discovered that it was actually blue-colored vodka and think to yourself, hey, that’s not a real martini; James Bond would never drink that. That’s because you knew it was a counterfeit offering.

Many of the “foods” that line our store shelves are as fake as a toupée-wearing man at a free lunch, sipping a pink vodka-martini with lots of zeros in his bank account. He then pays with a $3 dollar bill and hops on the hoverboard from Back to the Future.

I’m not just talking genetically engineered monstrosities or wheat and oats sprayed in Roundup weedkiller. Nope. While those food-like entities are certainly adulterated and contain poison that is linked to cancer, the foods I’m unveiling here are not real, in the sense that their ingredients or makeup resemble nothing of the original food.

Did you know that most – seriously, most – of your olive oil is totally and unequivocally fake. F-A-K-E. Nothing Extra Virgin about it. “More than two-thirds of common brands of extra-virgin olive oil found in California grocery stores aren’t what they claim to be, according to a report published by researchers at UC Davis.”

Most olive oil is adulterated with cheap, low-end oils like canola and soybean oil. Sometimes the oils are cut with lampante (“lamp oil”) which is made from fallen, spoiled olives and not fit for consumption. Real olive oil has a green hue and a distinctive taste. That’s why the people cutting it also add flavors and colors to the fake olive oil in some cases. And who are the ones making the big bucks by cutting this high-demand product before it reaches the store shelves??

None other than the MOB!

Turns out, the olive oil empire (worth $1.5 billion annually) can be much more lucrative to the mafia, less risky and more “above board” than going all Scarface on a powdery pile of blow.

If all of this is still not enough to outrage you, consider this: canola oil is like battery acid to the heart. At least it is if you listen to cardiology researchers. Unfortunately, this information has not reached the doctor’s office yet. If you are being extra careful to avoid heart-ripping, GMO canola oil – but then pouring it over your salads in the form of fake olive oil – then what good is that? I hate spending money on high-end products only to find out they are harming my family’s health.

Which oils should you avoid?

These 9 brands are as fake as the afore-mentioned 3 dollar bill. (source)

Which oils are ACTUALLY OLIVE OIL:

Learn more about the shocking truth about olive oil in Tom Mueller’s book  Extra Virginity: The Sublime and Scandalous World of Olive Oil.

What kind of cow produces Parmesan cheese? Well, it’s not so much about the cow as the place.

Many Americans think variations of the names Parmigiano or Reggiano are brand names but there is actually a specific region in Italy called Parmigiano-Reggiano. And as fantastical as it sounds, this entire region has been seriously dedicated to the painstaking work of crafting aged Parmesan rounds for over 800 years. This cheese is called the “King of Cheeses.” It’s also the fattiest cheese and who doesn’t love real Parmesan crumbles?

The problem is, it’s unlikely many of us know the real pleasure of Parmesan crumbles. That is, if you’re buying your cheese from green bottles that look like the cleaner you have under your sink.

Larry Olmsted, the author of Real Food Fake Food: Why You Don’t Know What You’re Eating & What You Can Do About It writes:

As good as the cheese is, and as famous as it is, you rarely actually get to eat it – even when you think you are. The English translation of the cheese is Parmesan, and when you buy it in England you get Parmigiano-Reggiano. It’s the law. The American translation is also Parmesan, but when you buy it here, you could be getting almost anything – except usually Parmigiano-Reggiano.

Parmigiano-Reggiano is allowed to contain only three very simple ingredients: milk (produced in the Parma/Reggio region and less than 20 hours from cow to cheese), salt, and rennet (a natural enzyme from calf intestine). Three other ingredients, Cellulose Powder, Potassium Sorbate, and Cheese Cultures are not found in Parmigiano-Reggiano – they are completely illegal in its production. Yet all three are in Kraft 100% Grated Parmesan Cheese…

Notice how you cannot tell if Kraft’s “100% Grated Parmesan Cheese” means that it is 100% grated or 100% Parmesan. Probably the former. Either way, Kraft is no longer allowed to sell its product labeled as Parmesan in Europe. In the U.S., most people remain blissfully unaware that they are not eating a real food.

Some of these brands contain 0% Parmesan cheese.

It gets worse… One of those ingredients. Cellulose Powder? That’s actually wood pulp. AKA plant fibers.

Some people don’t seem to object to this, saying “it’s just a little more fiber in the diet,” but here’s why it should bother you to have sawdust in your food. Firstly, the price. You are paying high prices for a diluted product. This is one way that food manufacturers beat inflation by duping the shopper. Secondly, wood pulp is an anti-clumping agent to cover up the fact that to begin with, is a non-food product.

Bloomberg conducted independent tests on other Parmesans to see if any contained amounts of cellulose higher than the 2 percent to 4 percent recommended by the Center for Dairy Research. Their findings:

How to get actual Parmesan cheese.

Know that Italian Parmigiano-Reggiano and Amerian Parmesan cheese are two totally different things. If you want the real deal, be willing to shell out a little more to find the words “Parmigiano-Reggiano” stamped on the rind. It’s a legally protected term in Europe.

Try to buy the whole wheel and from specialty shops. If buying pre-grated cheese, Sartori and BelGioioso are brands that are probably okay.

Think about the taste of orange juice. Now think about all the orange juice you’ve ever had. At your grandma’s house, at home, with a friend or at a restaurant (good grief it’s like $2.50 there and no free refills!)

Did you notice something about that orange juice? Every memory hosts the same flavor! But not every orange is the same. So how can every single carton, nay, every single brand of orange juice have that same explosive, tart flavor?

That’s easy. It’s not orange juice. At least not really.

As Gizmodo explained a while back:

Once the juice is squeezed and stored in gigantic vats, they start removing oxygen. Why? Because removing oxygen from the juice allows the liquid to keep for up to a year without spoiling. But! Removing that oxygen also removes the natural flavors of oranges. Yeah, it’s all backwards. So in order to have OJ actually taste like oranges, drink companies hire flavor and fragrance companies, the same ones that make perfumes for Dior, to create these “flavor packs” to make juice taste like, well, juice again.

Indeed, the orange juice is not only pasteurized and deodorized by this process with artificial aroma added back in, but also some companies add pulp-dissolving enzymes.

If that’s not enough to creep you out, here’s an article with a picture of an orange juice plant that shows whole oranges sitting in the juice. Pesticides, much??

Check this list to see if your favorite juice uses flavor packs or pulp-dissolving enzymes. A few that do not use the artificial flavor or enzymes are:

Now, the OJ beverage is becoming less popular because this kind of juice is basically just sugar water and no healthier than soda pop. The fakery doesn’t help either. Squeeze your own for the best benefits – add lemon or honey if you need to. “Slow” juicers are better than centrifugal for keeping the most benefits but hand-squeezing over a citrus dish also works.

Are you surprised that these foods are fake?

So there you have it, three beloved American foods that are uber fake. If you were having an Italian dinner with a mimosa then I’ve just totally ruined it for you.

Don’t even get me started on Champagne! (for another time)

What was the most shocking food on the list? Did you know about these edible imposters? Now that you know will you use the tips above to avoid them in the future? 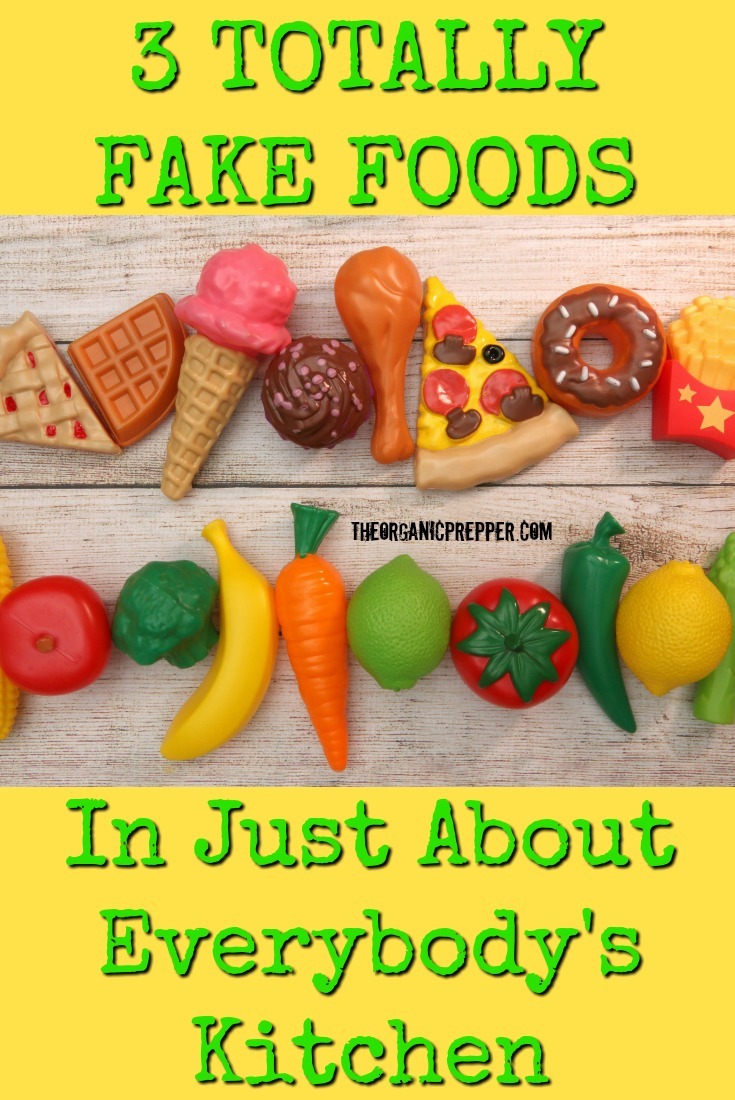