The Reality of Mind Reading: These Neuroscientists Can Predict Your Choices 11 Seconds Before You Make Them 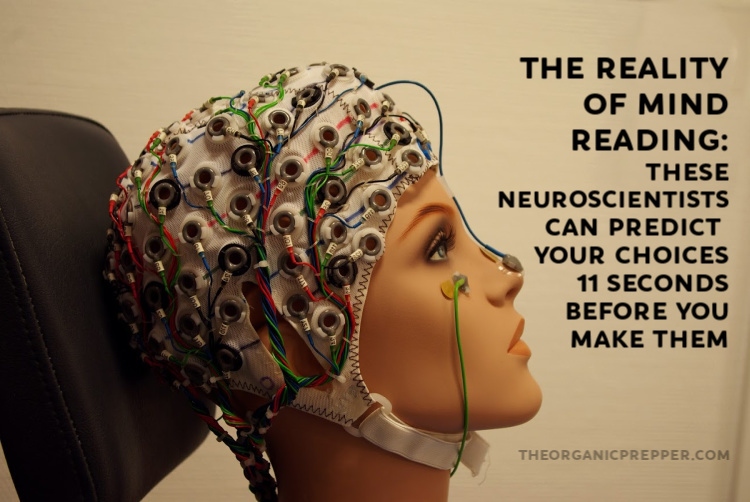 Does free will truly exist?

According to a new study, maybe not. It appears that we may have less control over our personal choices than we think. Unconscious brain activity seems to determine our choices well before we are even aware of them.

Researchers at the Future Minds Lab at UNSW School of Psychology in Australia were able to predict basic choices participants made BEFORE they consciously declared their decisions. Their findings were published last week in the journal Scientific Reports.

For the experiment, the researchers asked 14 participants to freely choose between two visual patterns – one of red horizontal stripes and one of green vertical stripes –  before consciously imagining them while being observed in a functional magnetic resonance imaging machine (fMRI).

They were given a maximum of 20 seconds to choose between the patterns. Once they’d made a decision, they pressed a button and had 10 seconds to visualize the pattern as hard as they could. Next, they were asked “what did you imagine?” and “how vivid was it?” They answered these questions by pressing buttons.

The results were unsettling.

Scientists were able to predict which pattern people would choose before their thoughts even became conscious.

Here is an explanation of the results, from the UNSW press release:

Not only could the researchers predict which pattern they would choose, they could also predict how strongly the participants were to rate their visualizations. With the assistance of machine learning, the researchers were successful at making above-chance predictions of the participants’ volitional choices at an average of 11 seconds before the thoughts became conscious.

The brain areas that revealed information about the future choices were located in executive areas of the brain – where our conscious decision-making is made – as well as visual and subcortical structures, suggesting an extended network of areas responsible for the birth of thoughts. (source)

Professor Joel Pearson said we may have thoughts on ‘standby’ based on previous brain activity, which then influences our final decisions without us being aware:

“We believe that when we are faced with the choice between two or more options of what to think about, non-conscious traces of the thoughts are there already, a bit like unconscious hallucinations.

This would explain, for example, why thinking over and over about something leads to ever more thoughts about it, as it occurs in a positive feedback loop.” (source)

The subjective strength of future thoughts was also dependent on activity housed in the early visual cortex, an area in the brain that receives visual information from the outside world. This suggests that the current state of activity in perceptual areas (which are believed to change randomly) has an influence on how strongly we think about things, the researchers explained.

This study isn’t the first to show that our thoughts can be predicted before we have them.

While these findings might seem shocking, this study isn’t the first to show that thoughts can be predicted before they are conscious.

Neuroscientists have long known that the brain prepares to act before you’re consciously aware, and there are just a few milliseconds between when a thought is conscious and when you enact it. Those milliseconds give us a chance to consciously reject unconscious impulses, seeming to form a foundation of free will. (source)

The researchers say that their findings may have implications for mental disorders involving thought intrusions that use mental imagery, such as PTSD. They cautioned against assuming that all choices are predetermined by pre-existing brain activity.

“Our results cannot guarantee that all choices are preceded by involuntary images, but it shows that this mechanism exists, and it potentially biases our everyday choices,” Professor Pearson said.

This kind of research could benefit people with certain disorders – but at what cost?

This kind of mind-reading technology certainly appears to have the potential for abuse and manipulation if it falls into the hands of the wrong people.

The list of ramifications could go on and on.

This is only part of a growing problem with invasive technology.

Just last month, a team of neuro-engineers at Columbia University reported that they developed a system that can translate people’s thoughts into intelligible, recognizable speech.

If you are concerned about how far all of this research is going to go, you aren’t alone. As I asked in Science FACT: Mind-Reading Technology Is Now Reality:

Oh, and on that note – Facebook is really into the idea of accessing user information directly from their brains. Yes, you read that correctly: Facebook wants to read users’ minds. During a February interview with Harvard law school professor Jonathan Zittrain, CEO Mark Zuckerberg mentioned a brain-computer interface (it would look similar to a shower cap) the social media behemoth is researching.

Zuckerberg’s reply will surprise no one: “Presumably, this would be something that someone would choose to use as a product.”

Despite years of bad press, public outrage over privacy violations, and the loss of millions of users (and counting), Facebook remains determined to infect our lives whether we want it to or not. And if you believe you are safe from the tech giant’s creepy stalker tactics, think again: Even if you have deactivated all of your social media accounts – or never had any in the first place – your privacy is not guaranteed.

Technology is progressing so rapidly it is difficult to keep up.

Nearly every day, reports of new and potentially invasive developments are being announced. Scientists and technology companies claim that this research is for the benefit of society, even while warning us about its potential dangers.

It sure seems like a dystopian nightmare is approaching.

What do you think about this research?

Do you think there is any good that can come of it? In what ways do you think it could be abused? Share your thoughts in the comments section below.