It’s Spreading: Now the British Media Is Pushing Microchipping In The UK 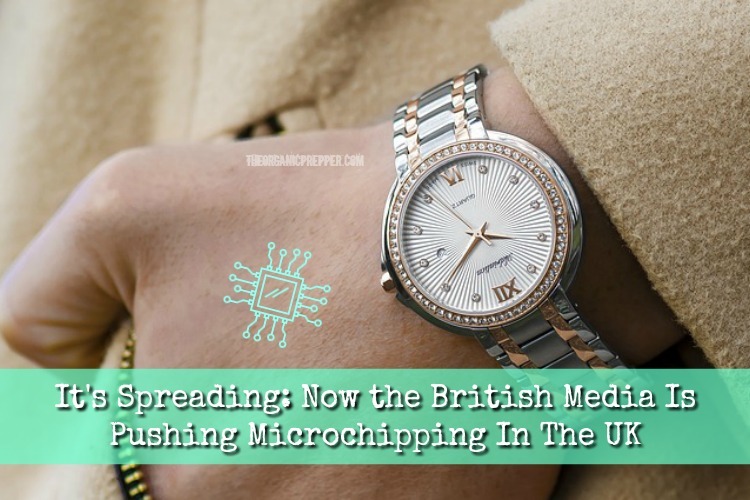 It’s no coincidence that a veritable public relations advertisement concealed as an article in the Daily Mail regarding the microchipping of thousands of Swedish people would soon be followed up by an article announcing yet more microchipping of employees and individuals in the UK. That is just what is happening now in an article by the Guardian entitled “Alarm over talks to implant UK employees with microchips.”

Although both articles present the idea of microchipping as something that is new and rarely done, the truth is that neither the technology nor the process is new and the practice is growing across Europe and North America at an alarming rate.

Britain’s largest “employer organization” and “main trade union body” is now speaking out over the prospect of British companies implanting their employees for security purposes.

According to the Guardian, BioTeq, a UK firm, has already implanted 150 microchips in the UK. The company offers the chips to both businesses and individuals and the implants are being marketed mainly for convenience and the ability to access secure locations or simply to start their car with a wave of their hand. The chips can also store medical data and are similar to the ones implanted in pets.

These chips are so tiny that they can be implanted between the thumb and forefinger while others, such as the ones offered by Biohax of Sweden, are about the size of a grain of rice. Biohax was one of the topics of a recent publicity push in the European media to promote (by the cover of an article) the process and the company in general. It is thus not surprising that the company is back in the news this time around or that it is now in discussions with several British financial and legal firms regarding the possibility of implanting their employees with microchips. One of those companies has hundreds of thousands of employees.

Of course, one has to wonder whether or not the technological totalitarian society is marching ahead with that fast a stride or if the stories are merely designed to present the sense of inevitability (i.e. hundreds of thousands of people are about to microchipped) so that Brits will accept the coming push as just one more cultural change they have no choice but to accept. In truth, it is much more likely to be a blend of both.

As for the pre-planned criticism that only goes so far (critics will never point out the agenda of microchipping entire populations for control purposes on the part of totalitarian governments/corporations) and provide a perfect pretext for the recent spate of covertly positive coverage of the microchips, the Trades Union Congress and Confederation of British Industry have voiced concern over the microchipping plans.

A CBI spokesperson said: “While technology is changing the way we work, this makes for distinctly uncomfortable reading. Firms should be concentrating on rather more immediate priorities and focusing on engaging their employees.”

According to the Guardian, “The TUC is worried that staff could be coerced into being microchipped. Its general secretary Frances O’Grady said: ‘We know workers are already concerned that some employers are using tech to control and micromanage, whittling away their staff’s right to privacy.’”

“Microchipping would give bosses even more power and control over their workers. There are obvious risks involved, and employers must not brush them aside, or pressure staff into being chipped, he said.”

Steven Northam, the founder and owner of BioTeq which is based out of Hampshire and the latest recipient of the free publicity courtesy of the British media which has pushed microchipping for years, told the Guardian that the majority of the 150 implants have been for individuals, though some engineering and financial firms have implanted the chips into their staff.

The practice of microchipping is spreading fast

BioTeq also worked with a bank that is testing the technology and shipped the chips to Spain, Germany, France, China, and Japan. Of course, Northam claims that himself and all the directors of BioTeq as well as his own company IncuHive, have been microchipped.

Jowan Österlund, the founder of Biohax and a former body piercer, told the Telegraph that his microchips, which cost £150 each, could help financial and legal firms improve security. “These companies have sensitive documents they are dealing with. [The chips] would allow them to set restrictions for whoever.”

Österlund said big companies, with 200,000 employees, could offer this as an opt-in. “If you have a 15% uptake that is still a huge number of people that won’t require a physical ID pass.”

Last year Wisconsin-based Three Square Market partnered with Biohax and became the first company in the US to microchip its employees, on a voluntary basis.

KPMG, one of the big four accountancy firms, said it was not planning to microchip its employees and “would under no circumstances consider doing so”.

Fellow accounting firms EY and PwC also said they would not consider microchipping their employees. Deloitte declined to comment.

Biohax has plans to open an office in London, according to its website. It claims 4,000 people have been microchipped, mostly in Sweden. It is working with the state-owned Swedish rail firm Statens Järnvägar, to allow its passengers to travel via chip implants rather than train tickets. Biohax did not respond to requests for comment. (source)

It should be noted that a number of Swedish companies are offering the service to their employees – usually for free – in order to encourage them to be able to enter the building quickly or pay for food in the cafeteria.

People have been getting microchipped for a while.

The Daily Mail, in its previous public relations piece for the microchip industry, that the implants were first used in 2015, confidentially, before they were rolled out to the general public. But microchipping of humans has been going on longer than that. For instance, in 2004, it was reported that many Mexican officials were getting “tagged” with microchips in order to improve security.

That same year, nightclubbers in Spain were getting themselves microchipped with essentially the same technology as that being rolled out in Sweden with the same perks, along with the requisite snob appeal.

And we can’t forget the famous Andy Rooney episode of 60 Minutes shortly after 911 where he promoted the idea of something “permanently implanted in my arm” that might identify him, almost as if he knew such a thing existed and almost as if he were part of a coordinated propaganda push to convince Americans that they needed this device for their safety and, of course, their convenience.

Particularly since 9/11 but even before, there has existed a desire for the microchipping of the entire population on the part of Western and Asian governments. During the 90’s, one only heard rumblings of the possibilities of the microchip at some point in the distant future. During the 2000’s, however, that chip was rolled out as something that could be used to prevent children from being abducted, Alzheimer’s patients from getting lost, and terrorists from gaining access to secure locations. Gradually, the security connotations gave way and were blended with snob appeal and “convenience” also blended with the Western world’s addiction to the cell phone/internet matrix and “wearable” electronics.

During the course of each “transition” and gradual move toward microchipping of human beings, there has been a steady dose of mass media propaganda reassuring their audiences that anyone who believes that microchipping might lead to mass population control is a conspiracy theorist, a Luddite, and probably a religious fanatic. Those articles and clips are followed up by other articles and videos that demonstrate that more and more people are taking a microchip out of security, convenience, and entertainment thus creating the illusion of popular acceptance which itself becomes a self-fulfilling prophecy.

As a result, the idea of a microchipped population no longer sounds like science fiction but an inevitability. The instances described in this article are only the start of what will soon be a massive “conversation” and “debate” that quickly and ultimately rules in favor of “science,” “technology,” “security,” “convenience,” and “control.”