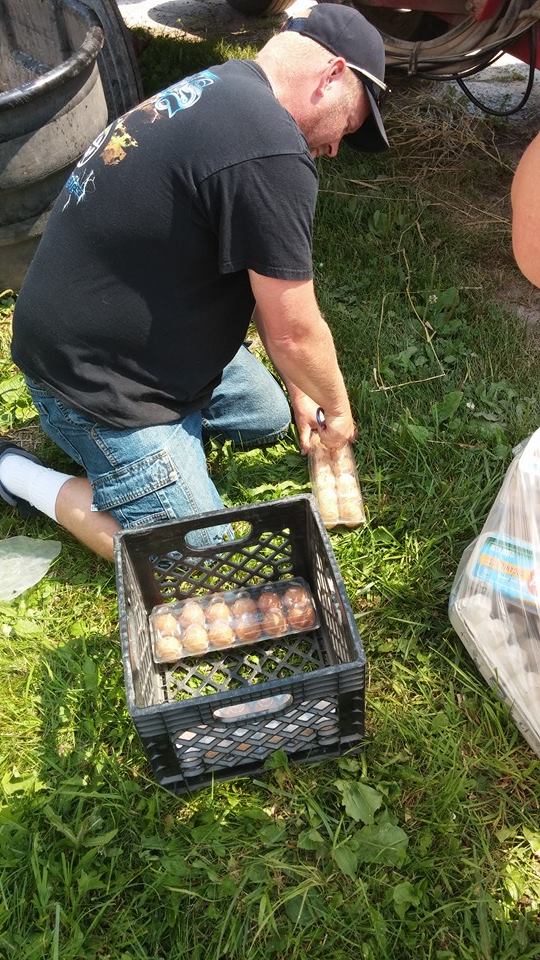 While Americans in the nearby city of Detroit face life in third world conditions, unable to even afford running water,  the state of Michigan decided to direct its resources towards cracking down on a small food co-op in Standish for having the utter audacity to provide milk, butter, cream and eggs to people who bought shares in the organic dairy.

The Michigan Department of Agriculture must be so proud of their deeds, after they forced Joe and Brenda Golimbieski, the owners of  Hill High Dairy and Jenny Samuelson, the owner of My Family Co-op, to dump out 248 gallons of milk, to break 100 dozen eggs, and to destroy an undisclosed amount of fresh cream, butter and cheese.

According to a post on the Hill High Dairy page on Facebook, the agents from the MDA stood over the family, watching as the food was destroyed.

100 dozen eggs… Each egg had to be broken. 248 gallons dumped in a sprayer that had to be witnessed by MDA being dumped and sprayed on the field.

Here are pictures of the destruction of this food from Hill High Dairy page – if you’re on Facebook, please go and give them a “like” to show your support. 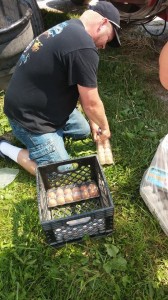 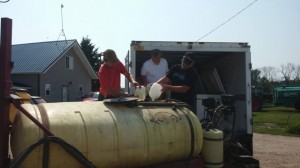 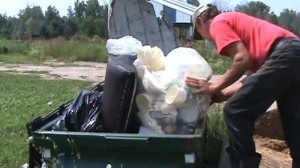 According to the owners of the dairy, the MDA threatened to arrest the co-op owner, Jenny Samuelson,  for “selling food without a license.” However, the farm is a co-op, where people must buy shares. The MDA, however, said that the co-op contracts were invalid, and therefore, instead of being shared, the food was being sold. Because co-op members had paid for their shares, technically the MDA stole food that belonged not just to the Golimbieski family, but to every single member of that co-op.

This is such a shame! I paid for these products and this is what happened!!!! They are all criminals!!! Government stealing all our food! I paid just so that Jenny and the farmers didn’t have to carry the burden all on their own!!!! A crying shame. Shame on Michigans Department of Agriculture! Criminals everyone on u!!!!

Looking at the website and Facebook page, all I see are happy, well-treated animals, actually roaming around in fields.  How is it that Michigan approves of the horrific conditions in its state’s factory farms, where animals are tortured, drugged, and crammed into cages for the entirety of their miserable lives, but raising animals humanely and naturally is considered “dangerous”?

I’ll tell you what’s wrong – big corporations do not want us to have options. They want a monopoly and they are working hard to destroy our other choices. Big Agri clearly has many good friends in the Michigan Department of Agriculture. Clearly the “Department of Agriculture” really means the “Department of Big Agri”. They aren’t there to support small farmers or people who wish to be self-sufficient. They are there to lock down the market for corporate farms. (Like Dean Foods, who also owns Horizon Organics – read more about the way this company does business – they own up to 90% of the corporate milk business in the state, according to an article on The Complete Patient )

David Gumpert, a raw milk advocate and owner of the site The Complete Patient wrote:

The government-sponsored dump of nearly $5,000 of milk, eggs, butter, and cream from Michigan’s My Family Co-Op yesterday carried a very clear and powerful political message to all Americans: We control your food and we don’t like you buying your food outside the corporate food system. Every now and then, we are going to remind you of what bad children you are being by taking your food and throwing it in the garbage. In fact, we are going to do more than remind you, we are going to completely humiliate you by preventing you from even feeding it to farm animals and instead forcing it to be disposed of in a landfill or dumpster…

…If you think I am exaggerating the intent of what is going on here, ask yourself this question: When was the last time you saw government agents seize and condemn food from a place like Foster Farms or Taco Bell or Del Monte or Kellogg’s or Trade Joe’s when their food has been found to contain pathogens, or made people sick? There’s been not even a suggestion that food at My Family Co-Op contained pathogens or made anyone sick. (Read the rest of Mr. Gumpert’s excellent essay on the subject)

The state of Michigan appears in the news again and again for infringing upon the liberty of its residents to choose what they wish to consume. Recently, they took away the “right to farm” from ordinary people, rescinding a law that had been on the books for years. Before that, Michigan’s Department of Natural Resources destroyed a farmer’s heritage pigs, calling them an “invasive species.”

This horrible visual of a farmer destroying fresh food while an “agent” stands over him to make certain that it’s inedible will stick with me. It’s like a scene from a movie, where the vanquishing enemy goes “scorched earth” on the denizens of the area they have conquered, ruining their crops, stealing their food stores, and most of all, making certain that they know they’ve been defeated.

Except it’s not a movie. It’s life in America. The barbarians are members of the government, and it is our own farms that are under siege.